The Justice League has been a hot property since Justice League #1 launched DC’s New 52 back in August of 2011. The title has stayed hot and it can only get hotter now that there is talk of a Justice League feature film. If Justice League the movie can do half the numbers the Avengers movie did we’d all be in a good place.

Justice League back issue comics have been heating up over the past couple of months. I’ve been watching the auction sites and these days you can’t get near a copy of Brave and the Bold #28 (1st appearance of Justice League of America) without paying a hefty premium over the prices the book was realizing last year.

Collectors and investors have taken a fresh interest in the Justice League of America (JLA) title. DC’s JLA ran from November 1960 and lasted until April 1987 getting to issue #261. GPAnalysis figures show that JLA’s share of the graded and tracked back issue market has increased by over 20% since a year ago.

I’ve mentioned before that many collectors in general are opting to collect special issues. These days the prospect of collecting a complete title just seems too daunting with prices generally being at historic highs. While I’m not seeing as many new collectors willing to start amassing the JLA run I am seeing more collectors hunting down key JLA issues. For most of us Brave and the Bold #28 and JLA #1 are a bit out of our price range. I often recommend issues like JLA #21 and #22 (the 1st “Crisis” books) but even they are getting pricey. Actually you can’t get very many high grade JLA issues below #100 for less than $100.

If we’re looking for a JLA issue with a hook and if we need it to be dirt cheap we should look no further than JLA #200. 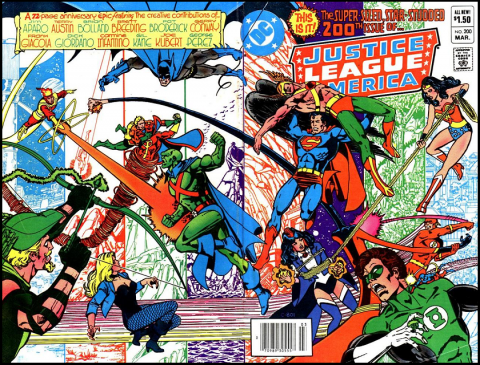 What really sets this book apart is the art, George Perez gets help from the likes of Jim Aparo, Carmine Infantino, Gil Kane, Brian Bolland and Joe Kubert just to name a few. Giving Joe Kubert the Hawkman sequences and Jim Aparo the Aquaman sequences is a nice touch of homage to classic DC! There were 8 different pencilers on this comic and the result is some wonderful art.

The story is titled “A League Divided” and starts off with some inter league fighting before the team finally unites to fight a common foe. The story is grand in scope with Conway trying to cram in as many heroes from JLA’s past as possible. Adam Strange, Martian Manhunter, The Phantom Stranger and the Green Arrow all show up for the party and Green Arrow officially rejoins the team in this issue.