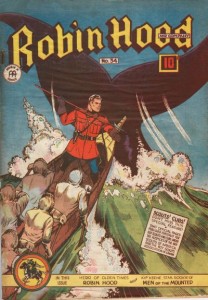 The second Canadian Whites (or WECA period) meeting was held by the “Team Canada” group, or is it the “Eh Team”? Actually we have no formal name yet but we met last week at the Toronto Comicon. I was able to attend the 1st 20 minutes of the meeting before my duties at the Big B Comics booth called me back. The meeting went well and I hope Ivan will soon throw up an update on where we stand with the whole project on his weekly White Tsumani post, which by the way is a treasure trove of information on the period. Ivan is making important discoveries every week it seems and his posts should not be missed.

The fact that Robin Hood was there at the very beginning and at the bitter end make it the longest running of all the Canadian Whites titles lasting almost 6 years.

Last issues are a proven collecting strain, all it will take here is raised awareness of the significance of this book and we should see an increase in demand.

By this time in the run Robin Hood was sharing the book with Kip Keene and the Men of the Mounties. Kip Keene covers dominated late in the run and as a Canadian I like this better.

These usually go for about $100 on the market but things should heat up for these books and soon. Our Heritage Project is raising awareness as will the upcoming documentary Lost Heroes.

I’m encouraging all Spotlight readers to pick up at least 1 comic from this era and if the bank book allows it at least one from each of the principal publishers, namely Bell Features, Maple Leaf, Educational and Anglo American.

The 42nd edition of the Overstreet Comic Book Price Guide sadly does not show prices for the Canadian Whites, something that we hope to change real soon.