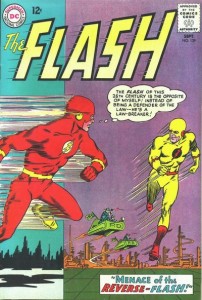 Kidding aside I greatly appreciate these submissions, I feel the Spotlight is enriched with different perspectives and unique arguments. I particularly like Peter’s reference to the similarities this issue’s villain has with other noted villains. Insights like these are great!

The Flash is the DC sleeper if you ask me and we should be looking at his key issues a bit more closely.

So without further adieu let us throw this week’s Spotlight over to the capable finger tips of Vancouver’s own Peter Chin.

The Silver Age of comics (1956 to 1970) was a great era for collecting comic books.  This was the time when Marvel re-invented the superhero genre and DC renewed their line-up with new and improved versions of their Golden Age heroes.  I’ve dreamed more than a few times of boarding a time machine and going back to the early 1960s and loading up on high-grade copies of early Justice League issues or Marvel key issues such as Amazing Fantasy #15.  Oh, if I could only pay 12 cents an issue for these treasures!

Today’s Undervalued Spotlight is all about time travel as it looks at the Flash #139, which is the first appearance of Professor Zoom (a.k.a. “Reverse-Flash”), a supervillain from the future.  In this issue, the Flash (Barry Allen) must travel to the distant future to fix a problem created by his friend, Dr. Drake.  Drake has launched a time capsule 500 years into the future, and the capsule contains an atomic clock and an old costume once worn by the Flash.  Dr. Drake warns him that the atomic clock will become unstable in this future time and cause a nuclear explosion and it’s up to the Flash to prevent the explosion.  In the year 2463, the capsule has broken open and is looted by a small-time criminal who calls himself Professor Zoom. Zoom has retrieved the Flash’s old costume and he uses the twenty-fifth century’s technology to replicate the Flash’s super speed, based on the wave patterns still imprinted in the Flash’s old costume.  Professor Zoom then paints the Flash’s old costume in reverse colours and then he goes on a crime spree, stealing valuable sculptures.  The Flash has his hands full in this issue because he must stop the Reverse-Flash and prevent the nuclear explosion.

From a comic collecting and investing standpoint, this issue has been undervalued relative to other Silver Age DC key issues, but this is changing as a near-mint copy of this issue has increased more than forty percent within the last two years.  A near mint copy is worth $500 in the current edition of the Overstreet price guide. Compared to Silver Age key issues from Marvel, the Flash #139 is even more of a steal.  This comic’s value should have more room to run as it plays catch-up in value to comparable Silver Age Marvel keys, which are regularly fetching more than $1,000 in near-mint condition.

The Flash is the titular character and he ranks right up there with Superman, Batman, and Wonder Woman in DC’s line-up of notable super-heroes.  With all the current talk about a Justice League movie, collectors need to consider that a Flash movie will probably be made before a JLA movie ever hits the big screen.  Assuming that DC will follow Marvel’s strategy of introducing each major team member first, I believe that DC will pump out a Flash movie so that audiences are familiar with the major figures within the JLA.  The Flash is one of the last major JLA members without a movie.  The Barry Allen Flash has been a part of many important story-lines in DC continuity and he can star in a viable superhero movie.  DC needs to tell his story before the Flash teams up with all the other JLA members in a movie.

The value of this comic should also move higher because Professor Zoom/Reverse-Flash is one of the major adversaries for the Flash.  Professor Zoom is an important villain and he ranks high in importance, just as important as other Flash enemies such as Captain Cold and Captain Boomerang. He has hurt the Flash on numerous occasions, including killing the Flash’s wife, Iris West.

Reverse Flash is a reverse or mirror image of Barry Allen Flash, and these types of supervillains are in-demand.  Consider the popularity of other villains who are reverse versions of famous superheroes: Bizarro, Sinestro, Sabretooth, and Venom are all well-known names and they all have highly-covetted debut issues.  It is now time for collectors to give Professor Zoom/Reverse-Flash his due.