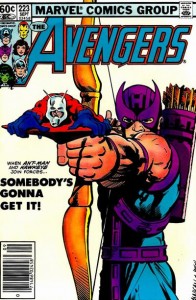 I was pricing up a stack of Avengers recently and like always I basically stopped at issue #200. Anything over #201 in the Avengers run has always gone straight to the bargain bins. Now I’ve been around long enough that I knew to pull #214 (Ghost Rider) and #263 (Jean Grey), these tend to be able to realize a bit more.

All the books were nice, tight and crisp so I had fun reminiscing as I casually perused through the pile. Avengers #223 almost knocked me of my seat!

The fact is I’ve always loved this cover but through habit I just robotically threw it in with the rest of the bargain bin books.

Is it me or is the general population’s interest in Hawkeye and Ant Man influencing core comic collectors. Remember most Hawkeye fans couldn’t care less about Hawkeye comics, but surely some have come over looking for cool collectible tidbits from the medium that spawned the character. Even then that might not be enough to explain the increase in demand for comics important to these characters. Yes, the popularity of these characters at large is influencing collecting patterns of already established comic collectors.

Somebody say bandwagon? That of course is not fair. Greater interest leads to more projects leads to better stories leads to earned interest. These are great characters that have earned the demand.

Hawkeye covers have always been among the best in the whole Avengers run, I love #189 and #109 is one of my favorites. For me though #223 is the best of the lot. Ant Man waiting to be launched on the end of one of Hawkeye’s arrows strikes a dramatic pose.

So hats off to Ed Hannigan who drew and to Klaus Janson who inked this cover that I consider a classic.

Start digging, you should be able to find high grade copies in the $3 range.

The 43rd edition of the Overstreet Comic Book Price Guide shows $4.50 as the 9.2 price.