One of the most interesting things about walking away from this great hobby of ours, which is what I did between 1992 and 2002, is finding out what you missed when you return. Both positive and negative.

Now, I was born in 1957 and cut my teeth on the Silver Age of Comics. Primarily Marvel. I loved growing up with these books and still love them today. When I sold my collection in 1992, just before the near collapse of the comic book industry, I did pretty good on my collection, although selling under duress is the worst way to go about it. I had become somewhat disillusioned with the direction of comics although there were always some unexpected bright lights in a rather dark time. I am sure I will be talking about both sides of the spectrum in this column in the future.

For today, however, I just want to touch upon a few things. In the time between when I sold my collection and when I returned a lot had changed. I got back into it, as I mentioned in an earlier column, when I went to my first Con in probably 15 or more years in 2002 or 2003. John Romita Sr., and Jr. for that matter, were at that Fan Expo.

The industry had totally changed .The “King” Jack Kirby was gone for almost 10 years, Big John Buscema died in 2002, and a lot of the artists I loved and admired had experienced the passage of time and it had not been kind. John Romita was the exception. Gene Colan as well was still active and doing some truly amazing work, but for the most part a lot had changed.

Even the Bronze Age stalwarts were getting older and a lot of people I had never heard of were popular, and certainly a lot of them didn’t seem to have long careers or just went into other endeavors, usually for financial reasons.

One of the truly prolific Bronze age artists, John Byrne had certainly been busy and was continually having books out monthly. Frank Miller had also made a name for himself. Sin City was in the big time. 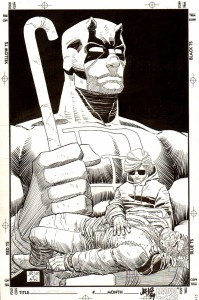 For the last twelve or so years since diving back in with both feet ,I have been led in a ton of different directions. Tim Sale has put out a bunch of Classic stories, as has John Romita Jr. He has been everywhere ,and in my opinion is one of the best storytellers in the industry! His collaborations with Frank Miller have been legendary.

So this “Son of the Silver Age” has been tasting and testing the waters in all kinds of directions over the last dozen or so years and even though the Silver Age is where I hang my hat, I have enjoyed a ton of diverse series, arcs and graphic novels covering the whole gamut that is available (except Anime).Quite a bit has been DC and if truth be told, of today’s comics, my favorite stuff is mostly coming from the smaller publishers. A few that I am particularily enjoying right now are Velvet, The Wake, Lazarus, and Captain America.

This past Comic Con in Toronto I decided to pick up the Crisis on Infinite Earths run, as I had never read it and it was such a popular run among fans of the DC Universe. Maybe because I was always a total Marvel over DC fan but I have never had such a difficult time finishing a story line. Mother always said “if you can’t say anything nice ,don’t say anything” but on this occasion I will just say it was a tough slog to complete. On the other hand John Byrne’s “Blood of the Demon” was excellent!

As Sly and the Family Stone was fond of saying, “Different Strokes for Different Folks”.

The best thing about comics today is just that! Different strokes, for “different folks”…and so on and so on and…

I bet that tune gets stuck in your head now too!