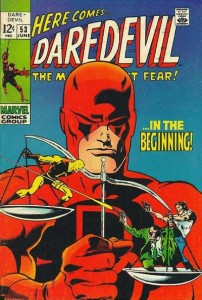 This week’s spotlight has been submitted by Mike Huddleston, author of Comic Book Daily’s fantastic Arcs and Runs column.

Mike has a lot of Marvel’s Silver and Bronze Age trapped in his head and every now and then he has to release some to relieve the pressure. His feel for the era and knowledge of back story is impressive to say the least; he is a man we should all be listening to!

Mike’s pick for this week is fantastic and a perfect fit for the Spotlight, it is a book too often overlooked and it does indeed have a stunning cover.

I’ll say no more and turn things over to Mike.

When I think of Daredevil comics to invest in I usually don’t go back to the sixties in my search. The Daredevil we know now was really born, like the X-Men in the bronze age of comics.  The Black Widow team-ups, Death Stalker (formerly, The Exterminator), Bullseye, Elektra, and the Kingpin weren’t part of his life back then. Neither was Frank Miller…

I’m not saying Daredevil was a lousy character back then, quite the contrary. Daredevil was one of my go to guys that I bought every month. He was a guy that was easier (for me at least) to relate to in terms of no real super powers. It took him a lot longer to beat bad guys than most super heroes and I liked that realism. He just became a lot more interesting later when other writers got a hold of him and explored the conflicts within his character.

That said, there are still some silver age gems to seek out in early Daredevil and I think today’s spotlight is one of them.

In the late sixties Marvel began re-telling origins of there super-heroes with big splash covers. It started with Amazing Spider-Man #50 in 1967. It continued with the new launches in 1968 of The Silver Surfer #1 and Captain Marvel #1. The re-launch books Iron Man #1, Captain America #100, Sub-Mariner #1, Incredible Hulk #102, Nick Fury #1 (re-launch no origin), Doctor Strange #169 followed by Nick Fury #4, Thor #158, and oh yeah we almost forgot Daredevil #53! Marvel’s own Deadly Dozen.

Our spotlight book today is Daredevil #53 issued June 1, 1969.  “As it was in the beginning “, is written by Roy Thomas, with pencils by Gene Colan, and inks by George Klein. This origin re-telling comes near the end of the silver age and is Daredevils last $0.12 issue. It’s a fine re-telling by Roy Thomas of DD’s origin the first since Daredevil #1. It is no secret I love origin stories and DD’s is a good one. It also boasts a superb Gene Colan cover, one of his best on the run. If you are looking for one copy representative of Silver Age Daredevil on the cheap with plenty of room to grow price wise, look no further. In my opinion, it is a great stand alone book, worth owning.