If you are a regular follower of this column, you may recall in the Batman Year One column from a few weeks ago, how I likened David Mazzucchelli’s work to that of Alex Toth.

Well this week the third and final book in “The Life and Art of Alex Toth”, Genius Animated, found its way into my eager hands. If you are not familiar with Alex Toth, you will probably be quite surprised at how much work you may be familiar with but didn’t know that Alex Toth had his hand in producing.

By all accounts he was a troubled man, with difficult relationships with family and colleagues alike, but that is not what I want to focus in on here. Like I said this is the third volume. The personal life story is exhaustively chronicled throughout each volume, but the highlight of the three volume retrospective is all the amazing art that is showcased, from every period and genre he was involved with.

Once you start thumbing through either Vol. 1″ Genius Isolated”, Vol. 2 “Genius Illustrated” and Vol. 3 ” Genius Animated” it is hard to put down. Whether the subject is romance, action, war or Hanna Barbera cartoon shows, it is very obvious how masterful a storyteller he is.

That is one of the most striking aspects of looking at his artwork. It tells the story period! With both a powerful line and an impeccable use of shadow and perspective, you wander around whichever world he has chosen to create and totally surrender to it.

Surprisingly Toth did very little work for Marvel over the years, hardly ever touching any of the characters in the Marvel Universe. He did however do a ton of work for DC, Warren and even very late in his career a little bit in Savage Sword of Conan.

If you were a kid in the 60’s you will be amazed at how much design work went into the Hanna Barbera Saturday morning cartoon lineup. Jonny Quest, Space Ghost, The Herculoids and on and on. I would be remiss if I didn’t bring up his amazing work on Zorro as well.

There is a ton of detail design work that went into pitches for concepts that were never produced. Many of them look great. It is a shame more of them weren’t produced. 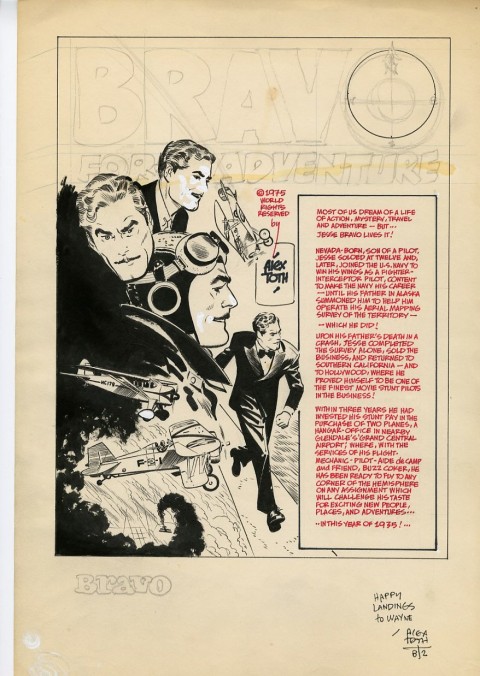 After going through these books, it really makes me regret selling the one piece of Original Art I had by Alex; a Promo piece for Bravo for Adventure.

The imagination and vision that went into his storytelling is like a lesson in the art of sequential storytelling. If you have
never become familiar with the work of Alex Toth before, these 3 volumes are lovingly put together and are a true masterpiece in showcasing this amazing talent.

After looking at these volumes I have decided it is time to start collecting some of his work from the Gold and Silver Age and beyond.