I reread a masterpiece this week. Frank Miller and David Mazzucchelli’s Batman Year One. Batman # 404 -407 was as refreshing and exciting this time as it was the first time in 1986.

The team of Miller and Mazzucchelli was first introduced to us in Marvels Daredevil. The “Born Again” storyline introduced us to the magic these two men were capable of. I am not going to compare the two stories except to say they are both examples of what this medium of sequential art storytelling is capable of. 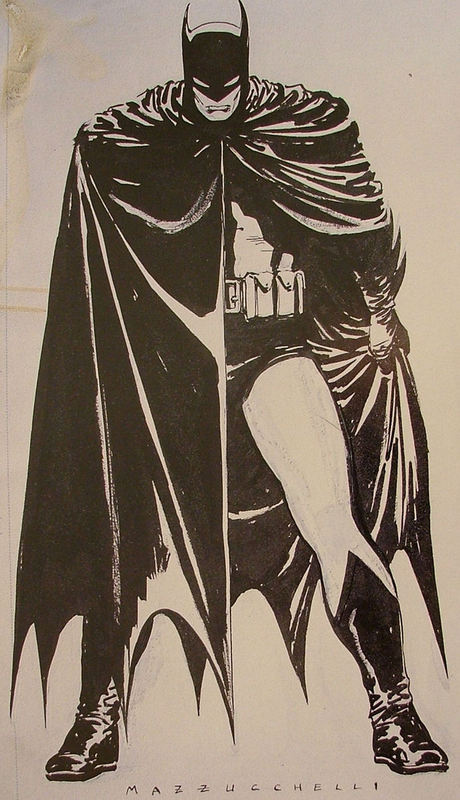 I ended up revisiting this storyline as a result of thinking about how some artists simplify their line work as they become more experienced storytellers. This is precisely the allure that this 4 issue storyline has to me. Frank Miller is an excellent writer and focusing on the writing alone gave him a real chance to shine in that capacity. Mazzucchelli seems to be able to totally relate with where Miller is coming from, and where he is going, in the story.

The embellishment of the origin and the fleshing out of the Jim Gordon character is a treat, and the oh so human angst of working long brutal hours and in the company of a kindred spirit who also happens to be a beautiful women, is as real as it is believable. Jim Gordon is a good man but with his wife at home, full term pregnant, and he working with his beautiful colleague, it is entirely believable that when the circumstances present themselves, as they do in this story, he gives in to the baser instincts and makes a decision that has serious ramifications in his professional and personal life. The resolution of which will have further ramifications.

Detective Essen is a fully fleshed out character as well. Driven and tough as nails. Yet beautiful and feminine at the same time. A brilliant line is Jim Gordon thinking “She knows how to walk in heels. So few women do these days. It’s practically a lost art.”

This is a comic book? Wow! By the way, Essen in the story is of German dissent. Essen in German means “to eat”. As in good enough to…

And let me say a few things about David Mazzucchelli’s artwork. Simply fabulous in its deceptively sparse style. Every nuance and twist and turn of Miller’s story is enhanced by, dare I say it, a style that is reminiscent of Alex Toth. I don’t say that lightly. Alex Toth is in a league where very few artists reside.

No photoshop in this story, pure storytelling without the gimmicks.

Oh yeah, Batman is in this too, as well as Selina Kyle, Alfred, Harvey Dent and a cast that is perfectly at home in what is the early adventures of the Batman.

There is nothing “small ball” about this story. It truly is a masterpiece! You can pick up steller copies of these issues in 9.6 for between $50 and $100 dollars each or it is available in Trade Paperback for much less.

Hopefully we will see this one day in the Artists Edition format.