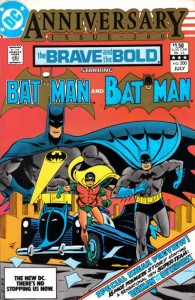 This is a great little comic that has no business being so little.

Here we have the 1st appearance of the Batman and the Outsiders, it’s an anniversary issue, it’s the last issue of the title, it’s a double sized 64 pager and it’s ridiculously cheap at $12 in 9.2 grade.

Batman and the Outsiders caught on quick; the team was given their own title the very next month, it went on to last 46 issues.

The Outsiders were most definitely inspired by Marvel’s X-Men, these were metahuman heroes who just did not fit into the mainstream Justice League. Batman founded the team after himself leaving the Justice League. The Outsider members included new characters Geo-Force, Katana and Halo, also on the team were Black Lightning and Metamorpho and of course Batman.

The team debuted in a 14 page story that acted as the back up to the 40 page Smell of Brimstone, Stench of Death main feature that starred 2 eras of the Batman.

One thing I learned while digging into this book is that it’s tough for a comic series to get to issue #200. Seems easy but it’s not and the vast majority of titles don’t even come close.

Most of the great Golden Age runs never got there, Whiz, Captain America even More Fun never got close.

Richie Rich made it but Wolverine didn’t.

Betty and Veronica did it twice, first with their 1950 series then with their 1987 series. Actually another related series Betty and Me made it too, it ended with #200.

Archie Publishing seemed to like calling it quits at #200, Jughead with Archie Digest ended in May 2005 at issue #200 and Jughead’s Double Digest just ended at #200 in February 2014.

I first thought that Jughead was the last title to end at #200 but then I realized Ultimate Spider-Man #200 was the final issue and that just hit the stands April 2nd 2014.

I think The Simpsons were the last start to finish title to get to #200, they reached the milestone in March 2013 and are still going strong.

The Four Color title was the 1st comic to reach #200, that was way back in October 1948 and the issue features Bugs Bunny. Four Color caught up to Famous Funnies (the 1st title to reach #100) because Dell was cranking out the Four Colors at more than once monthly.

My favorite #200s include Wonder Woman with the awesome Jeff Jones cover and Amazing Spider-Man because I remember running to the store to buy the thing.

By the way a 200 issue run with its accompanying Annuals all bagged and boarded fit nicely into a comic long box.