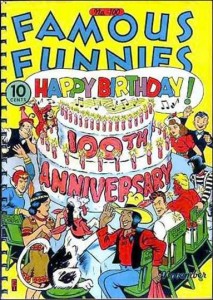 Famous Funnies #100 (November, 1942) represents the first comic to reach #100 and it did so in style. Added bonus points for the run being unbroken since Famous Funnies #1 (some titles cheat by taking over the number sequencing of other titles). Check out the super focused anniversary cover featuring 11 reoccurring characters, including Buck Rogers, sitting around a large 100th Anniversary cake.

What’s the big deal about a 100th issue? Well 100th issues are quite a healthy and active collecting strain. Why wouldn’t it be with the beautifully wide range of 100th issues available for collecting? There are great 100th issues in the Golden, Silver, Bronze and Modern age and they occur across all the genres of comics.

Collectors my age will remember Avengers #100 (June, 1972) where Barry Winsdor Smith famously drew all the characters that were ever Avengers on the cover. Is this Smith’s homage to Famous Funnies #100?

I find it interesting that both Batman #100 (June 1956) and Superman #100 (October, 1955) both out value Detective Comics #100 (June, 1945) and Action Comics #100 (September, 1946), their character’s original title’s. The guide values are about double even though the Detective and Action issues are about a decade older. The only excuse I could come up with is that Batman and Superman flaunted the anniversary while the event went unmentioned in Detective and Action.

What would be the most important #100, the biggest key? I’ll go with Captain America #100 (April, 1968). It was part of that big Marvel re-launch that that turned Strange Tales, Tales to Astonish and Tales of Suspense into Nick Fury, Dr. Strange, Incredible Hulk, Sub-Mariner, Iron Man and of course Captain America.

Alphabetically Ace Comics #100 (July, 1945) comes first while Young Romance Comics  (July, 1959) is last but because it has that weird Volume numbering system and does not have the issue # on the cover I’m giving DC’s Young Love #100 (October, 1972) the distinction of being last.

As you can see 100th issue have a great and colorful history. This spotlight exposes the need to treat with much more reverence the very first 100th issue comic book.

If I’ve made any errors with my claims above please post corrections in the comments field.

Actually please post your favorite #100 issue and feel free to add any cool 100th issue tidbit of any kind while you’re at it.