The title says it all.  What is “THE” comic?

My first comic book (that I can remember) was Spectacular Spider-Man #71.  It is a great comic book, and after re-reading it all these years later it still stands the test of time.  But the comic that changed everything for me was G.I. Joe #100.  Sure… big surprise my “THE COMIC” is a G.I. Joe comic, but let me explain.  This comic did change everything I knew about G.I. Joe and how I played with the toys. 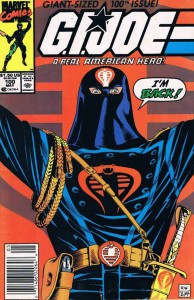 Issue #100 marked the return of Cobra Commander.  Cobra Commander was killed off and replaced by a Crimson Guard Fred series clone who wore the silver battle armour from 1987.  Issue 99 revealed that Cobra Commander wasn’t really dead but was in hiding for several years.  He amassed a fortune and built his new organization from the ground up (the same way he built Cobra).  He got bored with his new business ventures and returned to Cobra Island to take back his organization.  His first command upon his return was to execute his mutinous enemies (by burying them in a volcano).  His second command was to set up a Cobra stonghold on the continental United States.  Cobra always had a secret base within the U.S. in a town called Springfield.  G.I. Joe successfully shut down Cobra’s Springfield operation.  Now Cobra had their sights set on Millville.

Cobra invaded the town and took control.  Cobra cut off the road leading into and out of town.  Cobra cut off the phone lines and scrambled any radio signals in the area of Millville.  Cobra then set up Brain-Washing machines to reprogram Millville’s residents to become mindless slaves for a Cobra manufacturing facility.  The only thing Cobra didn’t plan on was Spirit (the G.I. Joe tracker) and Mutt (the G.I. Joe K-9 Specialist, with of course Junkyard).  They were in town visiting Mutt’s Uncle Jeff (ha ha… get it… Mutt… Jeff… it’s hilarious).  Mutt and Spirit try to get word to G.I. Joe but they find out that Mutt’s Uncle Jeff has already been brainwashed and now is an agent of Cobra. 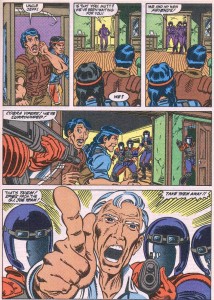 This was a fast paced, action packed comic book.  The reason this book changed the way I looked at everything G.I. Joe was how Cobra took over the town.  Cobra has been portrayed in the cartoons (the 80’s ones) as a bumbling organization that will never succeed in world domination (in the new Renegades and Resolute cartoons, they come pretty close to succeeding).  This comic showed Cobra Commander as a ruthless leader of this terrorist organization.  It also showed the Vipers, which were starting to become specialized, working in their squads (ie: Night Vipers together, Frag Vipers together). 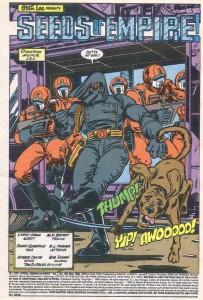 The subplot to the book is about Zarana and the Python Patrol trying to find the Pit (G.I. Joe base).  When they get close to it they will broadcast a frequency that will turn Rock N Roll and Clutch into psychopathic killers.

The comic also read as a checklist on how to take over a town.

Step 1) Cut off all routes in and out of town

Step 2) Cut off all forms of communication

Step 3) Replace police force with your own troopers

When I was a kid I used this as a blueprint when I was playing G.I. Joe.  It showed me the proper way to make a stronghold against G.I. Joe.  Then I would have to figure out how G.I. Joe was going to succeed.  This drastically changed how I played.  It was really different from bad guys are here… let’s get ’em.

The inclusion of the Python Patrol in the comic subplot was important too.  This line of figures and vehicles was just released.  The details on how the “pythonization process” worked for stealth wasn’t very clear.  Issue #100 showed that if it was covered in a Python Snake Pattern, it was undetectable by radar or heat signature.  This changed how I played with those toys too.

There have been other comic books that have changed the way I read, or view comics.  The Planetary series is one of them (all thanks to Pete and Brent).  Another is All Star Superman.  These comics have changed the way I think about those characters or comics in general.  But that copy of G.I. Joe #100 changed how I read comics, how I played with my toys and viewed the world in general.

What is “THE” comic that changed your view on comics?  We all have one.  Let us know in the comments below.