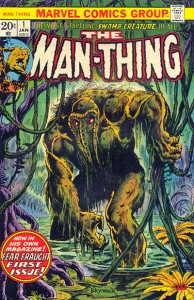 The success of the Guardians of the Galaxy movie has reignited some of the key comics associated with the team. Marvel Superheroes #18, Hulk #271, Marvel Preview #7 and Guardians Vol 2 #1 have all spiked from what already seemed like lofty heights.

We can thank a good fun story and a very positive public response to the movie and its characters and with the 2nd movie already announced we can safely say the Guardians have moved up at least one pop culture tier.

Everyone stays to the end during these movies waiting for that little clip they show in the credits. Remember how Iron Man #55 (1st Thanos) exploded in value after Thanos appeared at the end of one of those Marvel movies (I forget which one).

The Guardians flick gave us all a good laugh when Howard the Duck showed up during the credits and it sent everyone running to their collection trying to fish out a copy of Fear #19, Howard’s 1st appearance.

There is one thing I’d like to clear up about Man-Thing and that is that he predated DC’s Swamp Thing. Most comic collectors I grew up with assumed Swamp Thing was 1st because House of Secrets #92 (Swamp Thing’s 1st appearance), published June/July 1971, was a 15 center and all the Man-Thing comics most of us know are 20 centers (Astonishing Tales #12 June/72, Fear #10 October/72).

It’s easy to forget that Man-Thing 1st appeared in Savage Tales Magazine #1 (May 1971) and I think this is at least partly because most of us associate Savage Tales #1 to Conan.

Sorry, back to Howard.

Man-Thing #1 continues the story from Fear #19 and it contains Howard the Duck’s 2nd appearance (and we all know the value of 2nd appearances).

So while all the money is out chasing Fear #19 and Howard the Duck #1 grab some nice copies of Man-Thing #1while nobody’s looking.