It’s been almost two years since I wrote the last installment to this feature, but I thought it would be fun to clear out the cobwebs and get some answers from “the people over there”.  Get ready to “Woof, woof, woof” and come up with some creative answers.

There are many things that happen in comic books that we accept as fact.  I have questions about these events, but instead of doing the research, I want you, our readers to tell me the answers.

Here is what makes me go Hmmm!

How many people died during the battle of New York, Zod’s attack on Metropolis, or other comic book confrontations?

They make for epic scenes in movies – huge battles featuring our favourite heroes, but there is an element of realism to those battles, how many people have died?

The Chitauri level many parts of New York.  General Zod destroyed (presumably) half of Metropolis.  Even a helicarrier crashing into the Triskellion would have killed one person.  But the impact of loss of life isn’t touched on in the sequels.  Agents of S.H.I.E.L.D. did talk about the real toll on human life, but we don’t see Iron Man helping clear rubble, or Superman working at night helping rebuild Metropolis.  Heck… he gets a job at the Daily Planet and everything looks like it’s gone back to normal.

It’s something I don’t think they’ll touch on in future films, because they will want to keep things fresh and light (unless Christopher Nolan is involved).  But it is real.  If something like that happened today to us, we’d be talking about it for decades 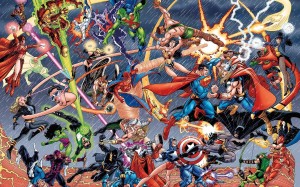 Who would win in a fight? Justice League or the Avengers?

Both of these teams are filled with super beings, geniuses, renegades and Gods.  Who would win in a fight between these two super teams?

Would it ever happen?

Back in the 90’s, the Amalgam imprint, merged the two universes together and created some new characters based off of Marvel and DC’s iconic characters.  I would like to see a “Secret Wars” or “Civil War” that would pit the two super teams against each other to see who is the mightiest.

Superman’s strength could go toe-to-toe with the strength of Hulk or Thor.  Captain America could pit his tactical prowess against the strategic planning of the Dark Knight.  Even Wonder Woman could face off against the likes of Captain Marvel (Carol Danvers) or Iron Man.

Maybe it will happen someday.  It would make for some interesting story telling for sure.

Which “unlikely” comic character should come to the big screen next?

This is one I’d like to hear your opinions on.

There are so many obscure comic book characters that should be on the big screen. Rocket Racoon and Groot in Guardians of the Galaxy have proved that anything is possible.

I’ll actually give you my answer on this one.

I think Thor 3 should introduce Surtur.  They could start the movie the same way that Walt Simonson introduced Beta Ray Bill in the 80’s.

S.H.I.E.L.D. (or some version of it) detects an alien spacecraft in close proximity to Earth.  Director Coulson contacts Thor to head into space to find out who it is and what are their intentions.  Thor meets Beta Ray Bill.  Bill gets possession of Mjolnir.  Battle ensues. Odin commissions the creation of Stormbreaker.  We find out about Surtur and the destruction of Beta Ray Bill’s home world.  Thor and Bill kick ass… and they all get Shawarma afterwards.

There you go Marvel.  There’s your movie laid out for you.

I know… there are some plot issues, but those need fixed.  We have no idea what happened to Odin after Thor The Dark World, and unless that’s explained in Avengers 2, it might take a movie or two to get things back to normal so we can have Beta Ray Bill in a movie.  But that’s what I want, and I hope it happens.

So there you go.  There are some questions for you, and I want to hear your opinions.  Use the comments below, or if you have something that “makes you go hmmm” post it below.  I will try my best to answer your question too.