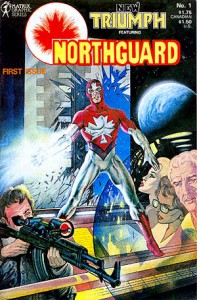 I just spent a lovely weekend at the Montreal Comic Con.

Montreal is a great town and their Con is a great event. This year, because I booked late, I ended up at a hotel right beside McGill University. Anyone that knows Montreal will know that the Con, held at the Palais des Congres is a brisk half hour walk away .

Perfect, it allowed me to walk the streets of the city core; I took a different route each of the three days, there and back, offering me six unique looks at the place.

During each walk though I’d have to cross the grand Rene Levesque Boulevard.

At the con I got the chance to roam around on the Sunday morning and check out the other vendor’s wares. At one table I spotted New Triumph #1 featuring Northguard. The condition was not the best so I passed but it did remind me of the nice set of #1-5 I have in my personal collection.

The book is a sound pick, it brings more than enough substance to back my sentimentality.

Progressive Allied Canadian Technologies’ (PACT) potent new weapon UNIBAND was custom made for the brain wave pattern of the now deceased agent. Wise is the closest match they can find and since PACT need’s desperately to stop the overthrow of the Canadian government by some ultra expansionist US organization Wise gets the job, like it or not.

Oh yeah, Wise will do it, he’ll help out, but on one condition. He wants to be turned into a superhero!

Wise scans some cool comics in his room for ideas. On page 15 you’ll note that Captain Canuck and Alpha Flight are in his pile, a true patriot.

PACT has no choice but to agree and tada – Northguard is born.

Anyone a bit older will enjoy the cameos of important people of the time, then Quebec Premier Rene Levesque is saved by Northguard, we see CBC news anchor Nowlton Nash, a shot of the old Montreal Forum and so on. The story is also very good, writer Mark Shainblum treated the material with respect and his story is exciting and thought out.

Actually Mark Shainblum is featured in the Lost Heroes documentary released earlier this year. Lost Heroes talks about the history of Canadian comics and Mark is there to talk about his Northguard project.

I’d recommend picking up the whole set #1-5, this is a great piece of Canadian comic history that this month is celebrating its 30th anniversary of publication.

As I’m sure you’ve read all over comic book daily Canadian comics are gaining a lot of attention and attracting new collectors worldwide.

The Nelvana’s and the Captain Canuck’s are paving the way and as we see more collectors digging around for unique Canadian properties many will stumble upon and like New Triumph featuring Northguard.

The cover to New Triumph #1 was painted by Peter Hsu with interior pencils by Gabriel Morrissette.

I’ve seen copies go from $1 to $5; actually I poked around an saw a VF set of 1-5 up for something like a dollar each. I was going to buy them but thought that would deflate the spirit of the Spotlight. If they’re still available late tonight I will snag them.

New Triumph is not listed in the 44th edition of the Overstreet Comic Book Price Guide.