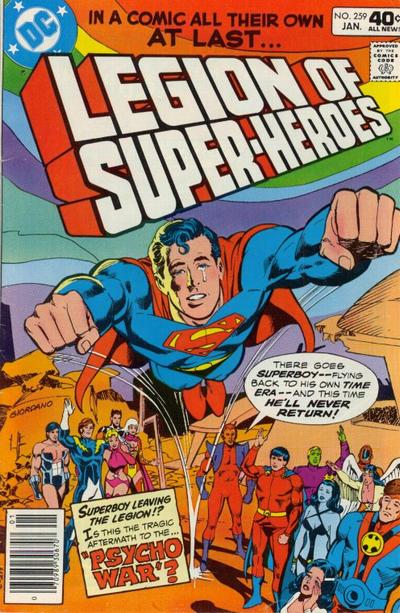 Adventure Comics #247 is getting pretty hot these days, the book features the first appearance of the Legion of Super Heroes and there’s lots of speculation going around. It seems to be a careful kind of speculation though because people are not really sure just what the hype is exactly. Lower grade copies are trading for about a 50% premium over guide while the last VF 8.0 fetched a 70% premium. Sales have been sparse lately and I’m sensing a nice penting up of demand. If you have one you want to get rid of now may be a good time.

Legion of Super Heroes #259 marks the team’s title debut. This title was of course Superboy from #1 trough #196 and with issue #197 the Legion shared cover billing with Superboy, the kid was a member after all.

Issue #259’s 17 page Psycho War story was created by the formidable team of Gerry Conway and one of my favorite artists of the time Joe Staton. In the issue Superboy leaves the team allowing the book to become a Legion title, it lasted through to issue #354. The title had an 8 year run, though the last 2 years were reprints.

I find it odd that every issue of the 4 issue 1973 run, which was all old Adventure Comics Legion reprints, has Guide values that are more than Legion of Super Heroes #259.

I’ll always remember as a young guy starting out in comics not really liking the legion but thinking they must be important because the Guide would note and separate what seemed like their first 100 appearances. Did you know that Action Comics #285 was the Legion’s 12th appearance, and that Superboy #93 was their 10th and Adventure #293 was their 13th? I don’t know of any other property that gets this preferential treatment from the Guide. Through my days as a comic book reseller these issues have always been slow movers. Maybe they’ll ride the coat tails of Adventure #247?

Take my advice and forget about their 9th appearance and their 14th appearance, forget about that reprint run from 1973 too. If you want to play a little Legion of Super Heroes speculating but don’t want to get up off of it for an Adventure #247 then there’s no better place to plop some money down than on a few nice, tight copies of Legion of Super Heroes #259, percentage wise I’m betting you’ll beat the returns of any of the books mentioned above even the first one.

A DC title launch from this super hot era of the late Bronze Age seems like a steal for $14, did you know a CGC 9.8 copy sold last June for a silly sounding $31.