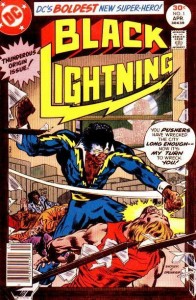 Guest writer Darren Graham’s Undervalued Spotlight #231 was a great post; it featured a strong book with tons of upside. Though the post did reminded me just how innovative Marvel was compared to DC at least. It seems to me the late 1960s were a time when DC held its breath, clung to its old formulas and hoped Marvel would somehow just go away. By the time DC smelt the coffee it was already too late but still they did try and Green Lantern #87 was an example of one of those “if you can’t beat them, join them” issues.

If John Stewart was DC’s answer to Black Panther and Falcon then my Spotlight of the week was DC’s answer to Luke Cage. Luke Cage Hero for Hire #1 was famously the first African American Marvel character to headline his own title while my Spotlight of the week, Black Lightning #1 represented the first African American DC character to not so famously headlining his own title.

Let’s face it Black Lightning went nowhere. The series lasted 11 issues, the 11th being written by Denny O’Neil. I always thought that if they’d given O’Neil a few more issues the story would have been different on the Black Lightning.

I read online (The Vault and Hembeck) that creator Tony Isabella was asked by DC to take on a project called the Black Bomber. From what I’ve read the Black Bomber was a white racist who turns into a black hero when under stress a la the Hulk I guess. The Black Bomber got his unique powers as the result of a chemical camouflage experiment he underwent in Vietnam, the idea being to help white troops blend into the jungle. Wow!

The story goes that Isabella convinced DC to scrap the project and start from scratch. This was probably a good call by DC.

Don’t ask me why or how but Black Lightning comics are suddenly quite difficult to find especially in high grade and good luck finding them below Guide.

Black Lightning does have its poor initial sales working in its favor, there are way less of these around as compared to say Kirby’s Black Panther series which started the same year

Remember that 1993 SNL skit where all the heroes gather for Superman’s funeral, the one where Aquaman brings the shrimp! Remember the comedian Sinbad as Black Lightning trying to come in to pay his respects. He doesn’t get in because nobody knows who he is.

I’m thinking the next time that Superman dies Black Lightning should have no problem getting in!