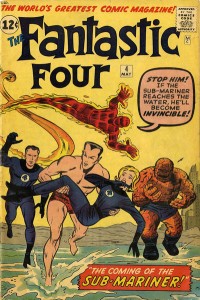 I lucked into a nice collection of early Marvels a couple of weeks back. There was a Journey #83, a Strange Tales #110 and a few other big Marvel keys. For some reason though, and I’m not sure why, I was most drawn to the lower mid-grade copy of the Fantastic Four #4.

Maybe it’s just the fact that I haven’t had a copy in such a long while; I’ve gone through 3 copies of FF #1 since my last #4. Maybe it’s the big 12 cent circle that tells you it’s early, early days (came out same month as Hulk #1). I can’t really say what it is or why I’m so awed by this book but the moment I picked it up I knew I had this week’s Undervalued Spotlight.

Fantastic Four #4 contains the 1st Silver Age appearance of the Sub-Mariner, that staple of the old Timely Golden Age. Stan Lee and Jack Kirby are your creative team!

I know that Fantastic Four #4 has been a heavyweight for a very long time, its Guide value reflects that. I think the book has been a bit of a sleeper over the past decade and has lost some ground relative to many other early Marvels.

The wild card is the Sub-Mariner. Subby was a massively important character for Marvel in the 1960s and into the early 1970s; he’s been around since 1939 and I’d say he’s Marvel’s biggest character yet to have a real impact on today’s pop culture.

I know I’m reaching but I think the chances are good that something positive will come out of the character in the coming years. I know there is simply too much history for Marvel to let the property fade.

From a pure comic collecting standpoint it is impossible to ignore this book, it is one of the truly iconic books of Marvel’s early beginnings. I put it into that second group of big Marvel keys that includes the Avengers #4 and Tales to Astonish #35.

Perhaps it’s a good time to jump on one of these and see what happens over the next couple of years. Comic prices are going insane and there will come a time when people will begin to realize that this book is being neglected and then it will be too late.

I don’t think grade is the issue with this one, grab a nice tight looking 4.0 and try to keep the pages to at least Off White to White.