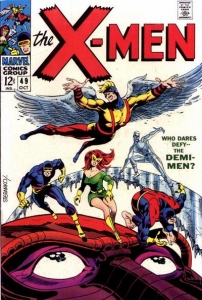 An X-Men fan recently told me something I didn’t even realize. He noted that only one X-Men book has ever been featured on the Undervalued Spotlight (#88). This is obviously neglect on my part as there are a lot of worthy issues in the X-Men run so I took it upon myself to pick an X-Men issue for this post.

This was a fun exercise: I came across many worthy candidates but finally settled on picking X-Men #49 as this week’s Undervalued Spotlight.

It’s hard not to like the Jim Steranko cover to X-Men #49, the white cover makes finding high grade copies next to impossible though and it makes the copies that do surface tight and lily white very sought after.

X-Men #49 does belong to that pre-Neal Adams grouping of X-Men issue that have settled into a bit of a funk over the last few years. It seems the collecting world has been passing these issues by.

In my mind this is a perfect time to reconsider this era of X-Men books and better yet pick one that is a standout among them.

X-Men #49 features the 1st appearance of Polaris (Lorna Dane). Polaris is a mutant who controls magnetism. From the onset it was suspected and later confirmed (in 2003’s Uncanny X-Men #431) that she is Magneto’s daughter. Magneto’s daughter! Polaris is also romantically linked with X-Man Havoc.

Polaris also suffers from recurring bouts of depression. Mental health is a hot topic today and having a character that has a history with this disease makes her an obvious poster girl much like Tony Stark is for Alcoholism. This is a touchy subject and treated right can add to the storytelling, still it is a layer of complexity to an already strong character.

She joins the X-Men in issue #60 and later becomes a member of X-Factor (X-Factor #70, 1991). The character is very much relevant today and is surely an easy ingredient to some great creative ideas to come.

Supply is tightening up too. Currently I see no higher grades available on the GPA links while CGC 9.4s or better are plentifully available for the issues around it.