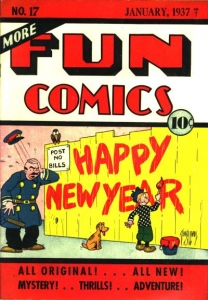 I wanted to start off 2016 by being topical, by righting a wrong and by fulfilling the mission of the Spotlight, all in one book.

I couldn’t get more topical that picking a comic that celebrates the New Year, I wish health, happiness and prosperity to all Spotlight readers, go out there and get it done people.

The wrong I’d like to right is the lack of pre superhero comics on the Undervalued Spotlight, I think this is only my 4th with Spotlights #127, #47 and #29 being the only others. This is a neglected era whose time has come: many gems will be mined from this era in the coming years. More on the pre-Superman Golden Age later.

The mission of course is to pick a comic that stands on its own and merits an argument for it being undervalued.

More Fun is a monster of a title, it’s the DC Golden Age heavyweight. The title lasted 127 issues ending in 1947. More Fun transcends genres, eras and even formats. The title brought us very important comics including #9 the 1st comic of standard size with original material, #52 the 1st Spectre, #55 the 1st Dr. Fate, #73 the 1st Green Arrow and Aquaman and #101 the 1st Superboy. This is a very tough run to amass.

More Fun Comics #17 boasts a Jerry Siegel and Joe Shuster Dr. Occult story. Dr. Occult 1st appeared in New Fun Comics #6 (changed to More Fun with #7) and his stories ran through issue #32. Dr. Occult is a big deal in comic book history: he is considered Siegel and Shuster’s prototype for Superman. In his defining story arc Dr. Occult was given a costume by the Mystics known as the Seven, when he wore it into battle against the villain called Koth he became the 1st costumed hero. This prototype arc actually started over in Comics Magazine #1 by Centaur (where he appeared as Dr. Mystic) then jumped back to More Fun in issue #14.

I mentioned above that I’d get back to the pre superhero era of comics, those Comics that started with Funnies on Parade in 1933 and ended with all the issues from May 1938, the month before Action Comics #1.

In this era there are many great books and many undervalued books, The very early and important milestone ones like Famous Funnies #1 are great and much sought after but its books like our More Fun #17 that currently aren’t getting any play and deserve a second look. The content is original and with a character like Dr. Occult the content is strong.

There are only 8 CGC graded copies of this book, 3 copies have actually sold over the past 5 years, all for just below guide.