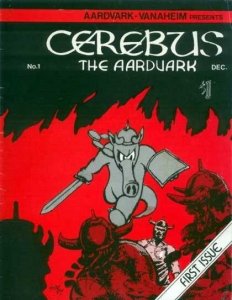 I thought this one through a bit and have decided to break with the tradition of picking a 300th issue (as I did with Spotlight #100 and Spotlight #200).

This week’s Undervalued Spotlight shines on Cerebus #1. The celebrated Cerebus run ends on issue #300 making it the fitting connection for this anniversary post.

I’d like to have a little fun before I laud the merits of my pick by recapping the first 300 spotlights. We’d be nowhere near #300 if it was all on me so I really have to thank all the Guest spotlight writers who have helped get us here, I’ll call out Mike Huddleston because he has been the most prolific Guest writer and I’ll not list everyone else only for fear of leaving somebody off the list. Many of our best picks have been posted by Guest writers so please keep them coming.

The Undervalued Spotlight is intended to be a fun and all inclusive exercise that covers comics regardless of era, genre or value. So far we’re done a pretty good job of not pigeon holing ourselves.

Of our first 300 Spotlights:

As I mentioned above Cerebus ran a celebrated 300 issues and while digging up more info I found out that DC’s John Constantine Hellblazer also ended on issue #300 while Robert Kirkman has stated that he has already planned the ending of Walking Dead and that the series will end with issue #300!

As for the Undervalued Spotlight, it has now set its sights on #301.

Enough preamble, let’s get to this week’s pick Cerebus #1.

It’s amazing the accolades Dave Sim’s Cerebus run has received. Alan Moore has called it staggering, Bill Sienkiewicz has called it one of the greatest accomplishments in comics, and Bill Willingham of Fables fame calls it one of the top 5 most important works ever in comics, while Kevin Eastman of TMNT believes we should all read it at least once.

The more I read up on Cerebus and Dave Sim the more I realized this book delivers large on two fronts. First Cerebus is a relatively scarce first issue to a massive work that is seen as a standard few hope to achieve, many view it as a great work of fiction worthy of study. Second Cerebus represents a monumental achievement in self publishing, one referenced by many as a catalyst for industry wide change and for a flowering of creative independent output.

I remember my partner and I buying Dave Sim’s rat chewed copy of Batman #1 through Harry Kremer. It must have been late 1980s and I remember how dumb and out of place the book looked beside our high end $40 Silver and Bronze Age books on our wall at comic cons. Eventually Harley Yee put us out of our misery by buying it off of us at cost and throwing us a few extra Bronze Age Spidey’s for our efforts (rookies).

I’ve actually tried to get Dave Sim to come in to do a signing at the Big B Hamilton shop but he said he needed to collect a few thousand more signatures supporting the fact that he does not hate women before he can appear in public. But I digress…

Cerebus #1 begins as a parody of Sword and Sorcery comics but the title eventually evolves into a very serious and ambitious platform for Dave Sim’s views. There’s too much weight to Cerebus for any synopsis by me to do it justice here, please jump on the net and find out for yourself.

So while we should be thankful for this epic that is Cerebus #1-300 perhaps we’re more indebted for the inspiration Cerebus gave to others, Jeff Smith (Bone) and Terry Moore (Strangers in Paradise) among many others owe the success of Cerebus much.

If you are picking a raw one up at a shop or at a con please note that there are counterfeits. The best way to tell is this; the real copy has the inside cover as dull and flat feel while the fake one has a glossy cover on the outside and the inside. I read too that the real copy has silver staples and the fake one bronze staples but these are easy enough to change so go with the gloss. There are a couple of good posts online on the differences so take a bit of time and educate yourself.