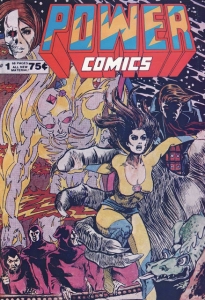 A seemingly random sequence of events led me to this week’s Spotlight. I’ll try not to bore you with the timeline but I have a feeling that will be inevitable.

As I often do before picking a book to post I review recent Spotlight selections. I do this in the interest of variety, not wanting to go to the same, publisher/era/value etc. Mixing things up means you have to be aware of recent posts. I went back to Spotlight #300, my Cerebus #1 pick.

I’m always on the hunt for potential Spotlight picks. Recently I picked up an incomplete copy of Comics Magazine #1, the May 1936 comic that features a 2 page Siegel and Shuster story featuring the Superman prototype character Dr. Mystic. Lucky for me the important 2 pages are not the missing ones, I’m now trying to figure out if I should grade the book as incomplete or grade the 2 Dr. Mystic pages separately just as pages? Anyway I considered this book a valid candidate, because it is, but was scared off because of how utterly impossible it would be to find one of these. I was in a populist mood.

Meanwhile a box of comics just graded at CGC came back and I was happy to find a fetching CGC 9.8 Power Comics #4 featuring a Northern Light cover by James Craig. Reviewing my Power Comics #4 info allowed this week’s Undervalued Spotlight pick, Power Comics #1, to enter my field of vision.

I swear it was one of those sixth sense moments or maybe more accurately a chocolate in my peanut butter moment, when Cerebus, Dr. Mystic and Northern Light revealed to me the obvious, Power Comics #1 is undervalued.

I don’t want to repeat the accolades I showered on Cerebus #1, how legendary creators love it, how important it is to self-publishing, you can read  all that in the Spotlight #300 post. I touch on the importance of Cerebus #1 because Power Comics #1 features the Dave Sim story “A Boy and his Aaardvark” published almost a year before Cerebus #1 (December 1977).

The story does not feature Cerebus but it does have Dave Sim exploring the Aaardvark as a commentary vehicle. Sim gives the Aaardvark a couple of good lines and even sticklers among us have to see this as an important prototype issue.

That last paragraph is a great segue into Comics Magazine #1, that crazy scarce Superman prototype issue that has an Overstreet value in the low end 2.0 (Good) grade of $3,600. Most of Comics Magazine #1’s value comes directly from the connection to Superman lending to my argument that these prototype issues, once widely known and recognized, can carry, sustain and even increase in value.

Widely known and recognized is the key here I think. I’m not the most knowledgeable guy in comics but I’ve been around and picked up random bits of comic knowledge here and there. I don’t think I was aware of the Power Comics #1 predating Cerebus #1 fact until I just stumbled upon it now.

Power Comics #1 could benefit from more general awareness, it has the stuff needed to gain value, small press publisher, prototype issue to an established property, very low current Guide value and even lower general awareness in the collecting community.