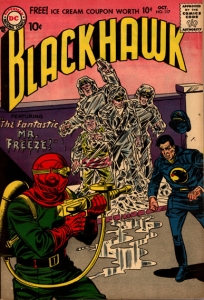 This week’s Spotlight came to me while I was trying to convince the owner of a large Batman collection to sell, or at least trade his books to me. He’s looking for a Spider-Man #1 and I just picked one up!

He was telling me that he focused his collection on Batman villains’ 1st appearances. This is one smart cookie. The list of villain 1st appearance issues he owns is amazing, something like 60 from 1957 and up.

He said one of the toughest to track down was a solid copy of Batman #121 featuring the 1st appearance of Mr. Freeze (then called Mr. Zero).

Batman #121 (February 1959) is an expensive comic, it’s a tough late 1950s DC introducing an important member of Batman’s Rouge’s Gallery but calling it undervalued at the moment would be a stretch as the market absolutely eats this book up.

I remembered coming across an article about a prototype issue and I did a quick search. The Undervalued Spotlight has covered prototype issues before and does so again this week by featuring Blackhawk #117.

Blackhawk #117 features the 1st appearance of Mr. Freeze in an 8 page story called “The Fantastic Mr. Freeze”. He was a robot used by a scientist named Dr. Thurman to commit crimes, complete with freeze ray gun.

This is actually a pretty close prototype. The Batman #121 Mr. Freeze (played so well by Arnold in 1997’s Batman and Robin”) being a scientist named Doctor Victor Fries who must wear a cryogenic suit to in order to survive. Dr. Fries commits crimes using a freeze gun that freezes his victims.

There are not that many titles deader than Blackhawk. A few years ago I picked up a nice solid run going back to the mid-50s and running into the late-60s. Some of those books started out with $60 price stickers, many moved into the half off bins from there and many of those ended up in the $5 bins after that. I don’t recall seeing it but I’m sure someone picked up a solid copy of #117, I hope I got at least $60 for it!

The best place to find this book is at those really good comic cons, you know, the ones that have the dealers that carry lots of bins of Silver Age and Bronze Age books. Odds are his Blackhawk bins (if he bothered to bring them) will have dust on them. You could probably haggle the guy down quite a bit on this book.

The way I see it there is no character hotter in the collecting and investing market than Batman. So many Batman keys are through the roof and are hard to approach financially. The Mr. freeze prototype should have Blackhawk #117 enjoying much more demand. Supply may actually be the issue here but there are lots of ungraded Blackhawks out there. This ma be a case of awareness of increased demand flushing out more copies.

As of this post there are a few low grade copies available on eBay, all relatively cheap.