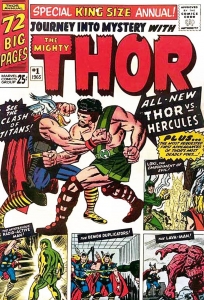 Marvel Comics certainly had a “way” with adapting fictional characters and making those characters their own. I can’t think of a bigger or better example than the Mighty Thor, introduced in Journey into Mystery #83, August 1962. Marvel took a character from Germanic and Norse mythology and turned him into one of the most popular superheroes around.

This week’s Undervalued Spotlight shines on a book that in theory could have spawned another great “Marvel Way” success story, Journey into Mystery Annual #1 from 1965.

Journey into Mystery Annual #1 introduces Marvel’s adaptation of Hercules, a hero drawn from Greek mythology and a natural playmate for Thor in the world of Marvel comics.

Hercules had already been used by other comic publishers including DC Comics, check out the Action Comics #279 cover. I think Hercules actually

1st appeared (in a Flashback) in All Star Comics #8, the issue that introduced Wonder Woman.

Obviously DC Comics didn’t have any success with their Hercules forays, most likely because there was never an attempt to update or adapt the character in with the others in the DC stable (DC had also used Thor). The Thor and Hercules characters were borrowed as the classic characters from folklore and legend.

This lack of adaptation may be the same reason that Hercules never caught on at Marvel the same way that Thor did. Remember that Kirby and Lee made a conscious effort to modernize Thor. Dr. Donald Blake became Thor’s alter ego and the whole thing worked like a charm. Hercules would have benefited from a similar approach.

I believe Marvel/Disney still has a large window in which to make Hercules more a Marvel character, more a Marvel hero than he is. I won’t underestimate the ability of Marvel/Disney. I predict a Marvel Hercules more “unhooked” and independent of the classic Greek version much the same way Thor is. It may never get to the scale of Thor but I do see a potential differentiation that would most definitely help the collecting value of Journey into Mystery Annual #1.

Journey into Mystery Annual #1 buys you a cheap ticket into this Hercules adaptation project.

As it stands now the book is one of the cheapest Marvels through 1965 that introduced a major heroic character.  Comparing to other Marvel Annuals of 1965 Journey into Mystery Annual #1 is behind the Guide value of Amazing Spider-Man Annual #2 ($850) but ahead of Fantastic Four Annual 33 ($450).