Happy Sesqui-seventeen to everyone and may it turn out the best that it can for all of you.

I’ve been trying to think about how our hobby and industry could make some sort of positive and relevant contribution to this special year and I thought that one way would be to produce a quality and entertaining graphic novel or comic book series to do with the history of our country.

Keep in mind, compared to most countries we’re just crawling out of our cribs—a century-and-a-half old infant reared mostly by our British nanny but, more than anything, wanting to play with our cowboy-suited pal next door. Can we even be said to have a real history yet. unless we call the unrecorded legacy of our First Nations to the front of the class? At best, if we only count the fifteen decades since confederation, what we have is the foreword and the first chapter of a promising story but a story worth knowing and reflecting on. It would be great to see it in one of the idioms of our time, the graphic novel or a comic book series.

Such a book or series would easily find its way onto school and public library shelves and could even become part of the curriculum. On top of this there may even be government grant monies to help realize such a project.

There have been some inklings of the kind of thing that could be done in Chester Brown’s panelled biography of Louis Riel which was published both as a comic book series and in graphic novel form. Chester Brown’s work is one of the best examples of a genre that Canada seems to excel at—the reality based panel story. Alongside Brown you find other standout creators in this field such as Julie Doucet, David Collier, Seth, and Jeff Lemire. There are many other examples such as our own Mel Taylor and his writing of stories for Negative Burn and Growing up with Comics. Ron Kasman, who came up the title for the latter, also has a couple of stories in this fifteen story collection and has recently extrapolated them into his just released his engrossing graphic novel about being a comic fan in the seventies: The Tower of the Comic Book Freaks. This tradition of translating real and possible life experiences into sequential panels is strong in Canada. 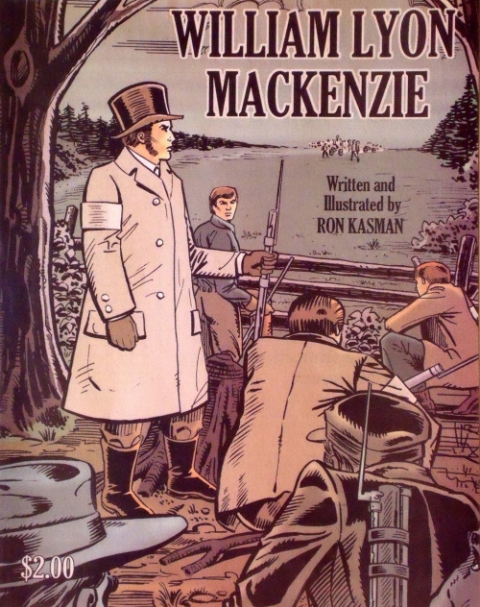 Ron Kasman also gave us another example of a comic about Canadian history in his rendering of the contribution of William Lyon Mackenzie, leader of the 1837 Upper Canada Rebellion to it. It came out in 2002 and I had the opportunity to ask Ron about how this project came into being. He explained:

Necessity was the mother of invention. I finished a B.A. and a B.Ed. and found myself unemployed, unable to find work as a teacher. I began writing and drawing a story about William Lyon Mackenzie after whom my own high school was named. I thought that if I could get it onto the Ontario textbook list I might have a better chance of landing a job.

I eventually did land a teaching job and finished William Lyon Mackenzie in my spare time. I wanted it to look like Barry Smith’s Conan, the hot book of the day. It looked more like an issue of Classic’s illustrated done by one of the company’s lesser lights. But one thing leads to another.

It was displayed in The Market Gallery of the City of Toronto Archives and the opening was attended by the mayor, Art Eagleton. It was reviewed in the Toronto Star when they did only one gallery review per week. It was picked up by Nelson Canada, then called Thomas Nelson and Sons for its potential as a text. It was never used but I did receive a kill fee. Years later it was published by The William Lyon Mackenzie Printery, a charitable group situated in Queenston Heights for the support of the memory of WLM. A couple of years later James K. Bartleman, the Lieutenant Governor of Upper Canada, distributed many thousands of copies to school children in his crusade for literacy.

It’s not a thing of beauty and I rarely show any of it. But it struck a nerve in a way that nothing else I have ever done, has. 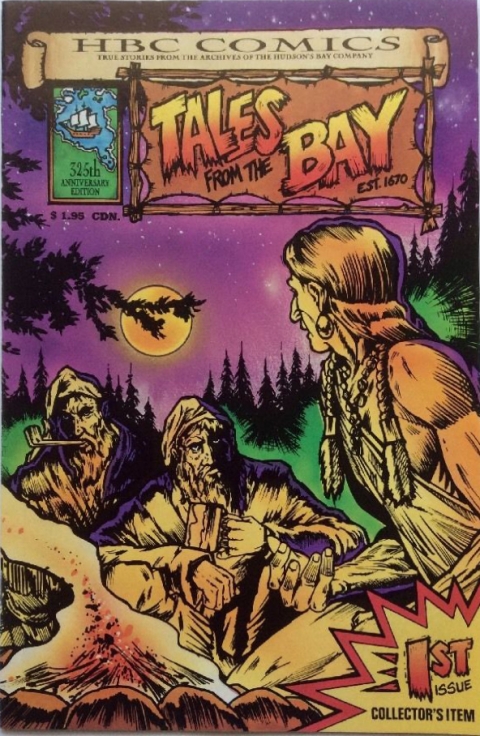 James Waley, the main man behind Orb Magazine and The Northern Light in the pre-Captain Canuck 70s, also provided similar leverage in bringing out the Hudson Bay Company’s Tales from the Bay in the mid-90s to celebrate the company’s 325th anniversary. James offered the following comments on the project:

I did a lot of writing for and ended up being the final art director for in order to bring it to completion.

Originally done in B&W they even decided, over the years, to have all the material digitally coloured and produced in limited animation from the artwork as you can see on this site, HBC Heritage … along with ebook presentations of the original pages.

Ron Kasman did most of the lettering for the book and I ended up having one of the stories reworked to a great extent (the artist had never done comic book storytelling before) and reassigning one, completely, to my long-time friend and collaborator, PAUL McCUSKER, who did an amazing job on the final production. Let me list some more examples of this genre that I can think of:

Hyena in Petticoats: The Story of Suffragette Nellie McClung by Willow Dawson

Canada at War: A Graphic History of World War Two by Paul Keery and Michael Wyatt

Portraits from Life by David Collier

I’ve probably and unwittingly left out a few others that should be mentioned but the point is that good work has recently been done in this area.

However, since this column is about Canadian war time comics, to point out the closest thing I’m talking about had been done/started by Educational Projects in Montreal at the start of 1943 in the fourth issue of their main title, Canadian Heroes. This was written at a time when the Union Jack was still our flag and Newfoundland was still a half dozen years from joining the Confederation and while the Second World War was still shaping who we were becoming as a nation.

The first installment was a very crude effort illustrated by Leo Hamel with an anonymous writing credit to “The Author.” I suspect that this “Author” credit, which stayed with the series for the next 26 issues of the title until its final 30th issue (Vol. 5 No. 6 October 1945) may have been the publisher himself, Harry Halperin, or even his wife Rose who wrote many of the book reviews and small text features for the title. This is speculation, of course.

The subject of this first installment was Icelandic Viking Leif Erikson’s discovery of North America along the east coast of Newfoundland, a millennium ago. After a couple of installments, an artist called Pietropaulo took over from Hamel and this presented a marked improvement in the quality of the strip, but he only lasted a few issues. 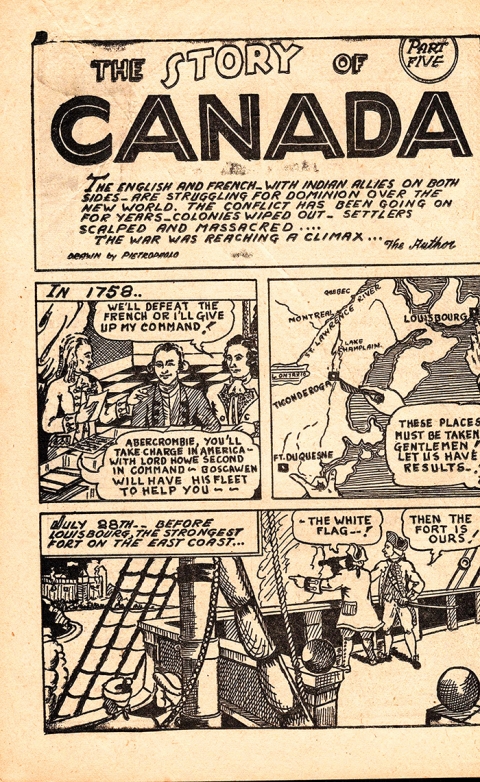 It wasn’t till around Canadian Heroes Vol. 2 No. 5 that Joseph Hillenbrand began doing the strip and that was, in my mind, when it really took off and Hillenbrand continued to do it until the final issue of the title. The subject of the final installment was the dawn of Confederation and the last panel promised an account of Confederation in the next issue which, of course, never came.

It’s true that the series covered everything prior to the period commemorated by the Sesquicentennial but again it showed the potential of what could be done generations before our modern graphic novelists took on segments of it.

In addition to this, biographic stories of individuals (explorers, politicians, industrialists, and sports figures) from Canadian history are scattered throughout all the issues of Canadian Heroes and present additional touch points for the timeline of our first 150 years.

Reprinting a collection of the best installments of the “Story of Canada” along with a few of the best biographic entries would make a great tip of the hat to this special year with maybe a couple of new stories covering the period from the end of WW2 to now.

One huge gap that needs to be addressed is that our history is not just the history of the colonizing conquerors but also of the First Nations and Inuit and the way they have been dealt with and marginalized by us. One recent example that does an inspiring job of this is Gord Downie and Jeff Lemire’s The Secret Path. Gord Hill’s 500 years of Indigenous Resistance, with its North American scope rightly doesn’t see a need to adopt our national borders and political identities and provides a perspective that needs to be considered when addressing a history of Canada. 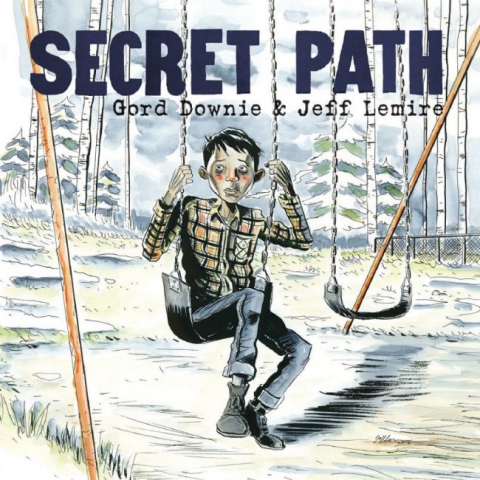 When I briefly mentioned the idea of this year being prime opportunity for such a project to Walter Durajlija over the holidays, he, understandably, shot back, “But, who would write it?” Well Pierre Berton is no longer around but there has been a concise and entertaining history of Canada written by Will Ferguson in the “… for Dummies” series called Canadian History for Dummies and it wouldn’t take much to adapt and script it to graphic novel format. It has recently come out in a second, updated edition. I wonder if Will himself would take up an interest in such a project? 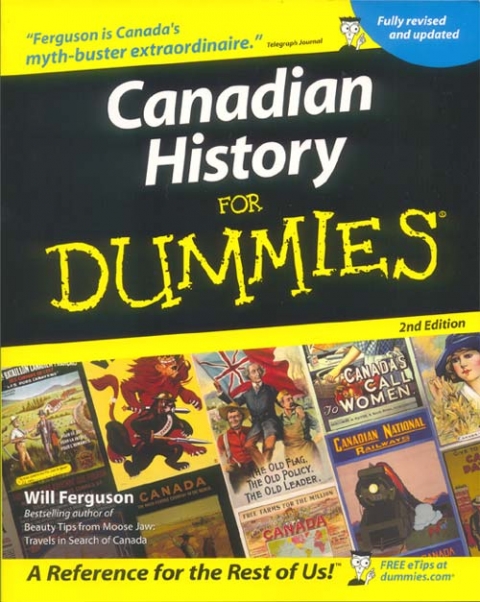 Well there, I’ve shared a recent pipe dream of mine spurred on by the advent of the Sesquicentennial. Such books and strips as I’ve discussed and proposed in this column will never be investment grade commodities. They will be lost in the market vortex that sucks most of the energy out of our long-time hobby/pastime and a table featuring them at any of this year’s cons would languish in its own solitude. I cannot imagine they would generate any sort of cosplay except at historical re-enactments. However they do have significant worth apart from dazzle and dollar sign and this would be a project meriting pursuit in this sesquicentennial year. What a special thing it is to be part of this experiment we call Canada. 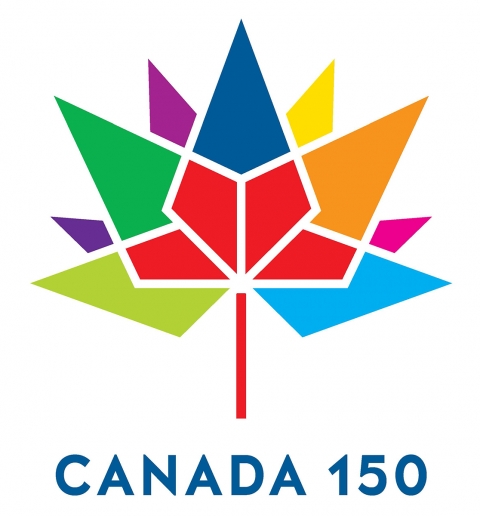