This is the final segment of our Marvel super hero annuals (specials) series with original content from the 1960’s. Our first two segments were pretty much all Fantastic Four and Spider-Man, here are the rest. 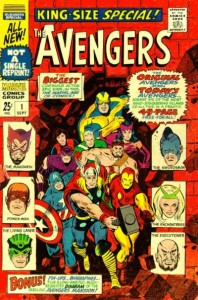 The Monstrous Plan of The Mandarin

This annual has already been well covered here on Comic Book Daily by Walter Durajlija and his Undervalued Spotlight #155 and by Clint McElroy in Doc Curmudgeon July 24, 2014.

To quote Walter: This is the kind of comic book that makes comic collecting fun. 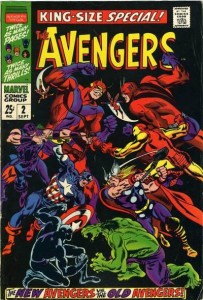 and times the rushing river

We just covered this book last month in Arcs & Runs. I confess that I had forgotten the connection to the regular continuity of Avengers #56-57 when I picked that run and started re-reading the books.

The only add I have for this annual is just how tough this book is to find in grade. The beautiful black back ground face-off cover is very difficult to find in high grade. Current census numbers show 68 books graded in 9.0 or higher, but only five in 9.6 and zero in 9.8. It’s always been a tough book for me. 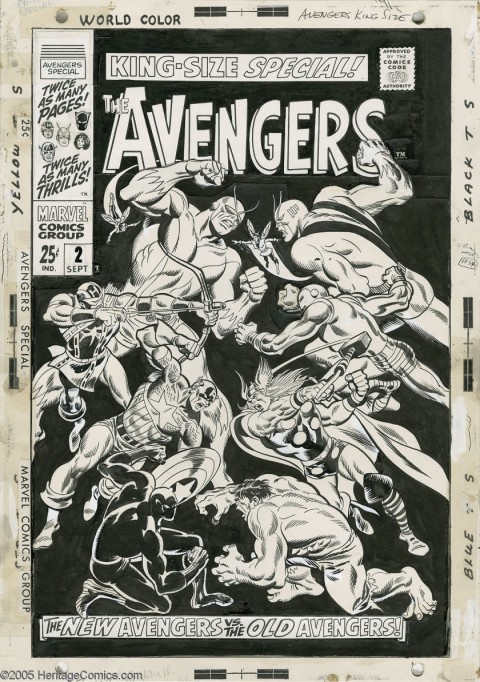 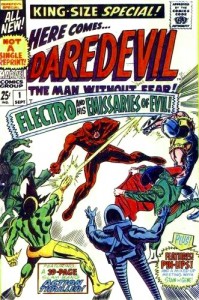 Electro and his Emissaries of Evil

Cover and Interior art by Gene Colan with inking help from Frank Giacoia and Joe Tartaglione. Story by Stan Lee.

Daredevil gets his one chance at an annual in the 60’s with original content. I am being nice when I call this original as the book itself is a pretty close copy in format and story to Amazing Spider-Man Annual #1 and the Sinister Six. We won’t blame this on Stan, we will instead toss the blame at Electro who is a member of the Sinister Six but wants to start his own gang to tackle Daredevil and exact revenge upon him for his previous defeat in Daredevil issue #2. He rounds up other DD adversaries the Stilt Man, the Gladiator, the Matador, and Leap Frog to form his Emissaries of Evil. The Matador and Leap Frog are delighted that anybody would invite them to join a bad guy team.

The story itself follows a similar pattern to ASM Annual #1 with Daredevil battling each of his foes individually and then the story takes a turn to the original. Electro bands them together to attack Daredevil all at once. In theory this should spell big trouble for DD but this group is still not a team. They act more as individuals all wanting to be “the one” who takes down Daredevil. Daredevil uses this to his advantage and with some difficulty manages to take out this not so brainy gang as Electro and his Emissaries of Evil are defeated. Where is the Purple Man when you need him!

The book is a fun romp for Daredevil fans and the rest of the annual is full of the usual pin-ups, rogues gallery, Daredevil facts and friends, and everything you ever wanted to know about DD’s billy club.

This book is still pretty cheap and relatively easy to find in grade. A treat for Gene Colan fans and Daredevil fans in general, it is a fun book to own. 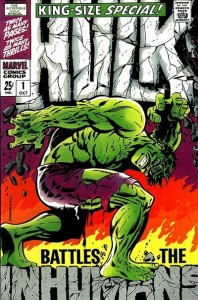 I was pretty excited when I finally got to re-live this book. I have always loved the beautiful Jim Steranko cover on this book and the story about how he received the assignment to make the cover. I had read somewhere a long time ago (feels like an urban legend now) about how he had drawn, inked, coloured and lettered the cover for this book in one day( a Friday) and delivered the finished cover to Marvel in New York on the Saturday.

When I was re-confirming some particulars at the Marvel comic data base (great site) and I noticed Marie Severin had some cover credit for this book. What? Further investigation shows she had apparently re-drawn the Hulk’s face on the cover. This apparently had been confirmed by Steranko himself via twitter “had drawn the Hulk’s head with sweat and bulging veins, but was told his version was “too fierce”. Apparently Marie Severin re-drew the face and Steranko referred to it as a “Hulk teddy bear face” on twitter. It’s funny I can’t tell you how many times I have looked at this cover and not seen a non Steranko face on the Hulk. When I look at it now, compared to Steranko’s other Hulk work, this story rings true… Steranko was known for keeping most of his artwork but might not have this finished piece. This info is all second hand so if anyone has anything else to add to this I would love to hear it.

Oh yeah the book! The Hulk has found his way down to South America and quickly runs a foul with the locals. The Inhuman’s favourite pet Lockjaw shows up and after a run in of his own with the Hulk, he teleports the Hulk to another dimension full of evil Inhumans. In short order the bad guys are joined by Black Bolt’s evil brother Maximus. He see’s the potential in the Hulk for chaos and wants to put him to good use back in the Hidden land. Maximus the Mad is trying to free ancient weapon to wreak havoc and take over the Hidden Land refuge from Black Bolt. He transports the Hulk and evil Inhumans back to the Hidden Land and puts his plan into action. The Hulk wants no part of Maximus’s plan and tries to escape causing a lot of the chaos Maximus had hoped for, while he attempts to free the ancient weapon (Romnars absorbing machine). Black Bolt and Gorgon enter the fight and save the day (shortened version). Black Bolt offers the Hulk sanctuary which he politely refuses and he goes on his way. Maximus the Mad doesn’t forget about his encounter with the Hulk and he tries to use the Hulk for his own purposes in Hulk issues #119-120 less than a year later.

The book does contain one pin-up of note featuring 11 different renditions of the Hulk from the artists who have drawn him. Incredible Hulk Special #1 is still readily available at pretty reasonable prices in nice grades 8.0 – 9.2 ($72 -$235). The iconic cover is still the main draw, and it is the only number 1 issue of the Hulk from the sixties you will likely ever be able to afford!  The whole re-drawn face thing is still bugging me. 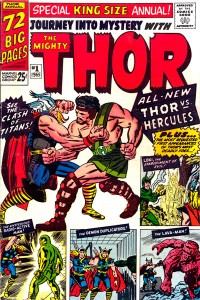 Thor’s first of two annuals begins with Thor and Loki traveling to Jotunheim in search of a road to Olympus. They come across and tangle with some Frost Giants. As the skirmish ends, Thor falls through a hole in the ground into a cavern. He follows a path seeking a way out when he comes to a bridge. Hercules is on the other side and tells Thor to wait until he has crossed before entering the bridge. Ahhh right! It’s a real Robin Hood/ Friar Tuck sort of moment and a well matched and fought battle ensues between our two sometimes swelled headed heroes. With no end in sight Zeus stops the fight. He commands the two part as friends. Zeus transports Thor back to Jotunheim and closes the cavern and places a mountain on the road. With the road block Thor joins Loki and they continue on their way, and Thor wonders if he will meet the powerful Hercules again. He doesn’t have to wait long as Hercules shows up in a couple of months in Journey Into Mystery #124.

The book itself has always been a bit of tough book to find in grade and the 1965 book is highest priced in our Arcs & Runs feature today. It is a book worth owning. 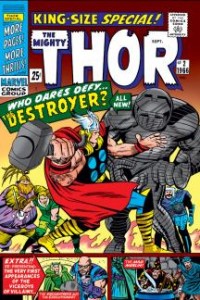 If Asgard should fall

Our second Thor tale begins with Odin regaling his past glory in the Tournament of Titans (AKA the Olympics of Asgard) to Thor and how he is now relegated to being just a judge of the contest. The Warriors Three show and drag our hero Thor out to visit the festivities and join the contest. Meanwhile rotating around Asgard are the immobilized bodies of Loki and the Absorbing Man after their most recent defeat at the hands of Thor and Odin (Journey in to Mystery #120-123). Loki is craving revenge and projects his soul in to the lifeless but deadly Destroyer shell of armour. We were just introduced to this terrifying armour in Journey in to Mystery #118 – 119. I must say I find the Destroyer one scary entity when activated.

Thor and The Warriors have come across a brawl at a drinking establishment and meet four powerful ruffians Tyr, Brok, Galp, and Drom. Thor and company breakup the brawl and a challenge are issued for all eight of the battlers to meet at the Tournament of Titans.  The challenge is accepted and the eight enter the ring and the fight is on.

At the same time the Loki led Destroyer has arrived at the bridge guarded by Heimdall, who is swatted away like a flea. The Destroyer arrives at the Tournament of Titans and works his way through the contestants on his way to Odin. Even Thor can’t stop him. Loki announces to Odin that is he who is guiding the deadly armour and he intends to kill him. The Destroyer raises his visor and is about to unleash his deadly disintegrator ray when… we see what the all-seeing eye of Odin has been up to. He has sent Balder the Brave on a mission to find Loki’s body. Once found and just before the Destroyer can deploy his devastating ray, Odin casts a spell of forgetfulness on to the prone body of Loki. Loki’s soul returns to his body and the Destroyers shell of armour falls lifeless once more. The celebration begins as Odin declares that all of the combatants are champions.

This book also contains reprints of Journey in to Mystery #96 & #103. It is much easier book to obtain than JIM annual #1 and a lot more affordable as well.

44th Overstreet values for the books featured in this segment of Arcs & Runs are listed below.

And so ends this run of eighteen Marvel Annuals and Specials with original content. We’ll follow this with one more column featuring the best Marvel reprint and one shot annuals from the sixties later this year. Until next time have fun filling in the holes in your want list!