One of my personal favourite genres of comic books that I like to collect is the big square bound super-hero annuals.  Twice the size and price of a regular comic, these books only came out once a year and were packed with pin-ups, some classic reprints, and usually a crackling good original story. The original stories quite often took place outside the current storylines taking place in the title, but had a place in the character or groups long term continuity. There were surprisingly few made – I count 18 in the sixties and some characters and groups had none at all. I did not include war, romance, westerns, or re-print annuals in this first series but may get to them at a later date.

When you are talking Marvel annuals you have to start with the two big dogs of the era the Fantastic Four and Spider-Man. They combine for more than half of the annuals produced. Part 1 features the Fantastic Four with brief synopsis for each story. It’s clobbering time! 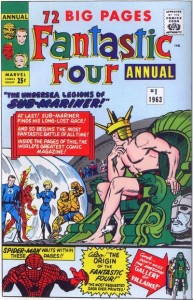 Sub-mariner versus the Human race

Our tale begins with the Sub-Mariner having found his lost kingdom of Atlantis and his  people. We get to meet Subby’s better half the lovely Lady Dorma and the evil warlord Krang for the first time. They both become fixtures in future Sub-mariner stories. The Sub-Mariner wastes no time in making demands to the surface world, claiming ownership of all the water and sky above Atlantis belongs to the Atlantian Nation. There is the first inevitable battle between the FF and the Atlantian army in New York, a brief origin story of the Sub-Mariner told by himself, and later a truce between all parties. This truce takes place when Lady Dorma and Krang try to kill Sue Storm (for their own personal reasons) by drowning her. The Sub-Mariner still has feeling for Sue, and he puts the war on hold to get her medical attention and save her life. This story sets the tone for most Sub-Mariner stories going forward, with many of his adventures springing from his Atlantis kingdom.

Additional content features a reprinting of Amazing Spider-Man #1 with added fight scenes between Spidey and the FF. A reprint of Fantastic Four #1. A complete rogue’s gallery of the Fantastic Four villains they had met to date. These were in full page pin-up styles pages. You were encouraged to cut these out and many kids did (like Marvel value stamps) and this put a serious dent in the back issue market for this book. 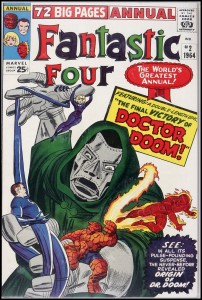 The Fantastic Four’s most deadly enemy Doctor Doom is the featured villain is this annual. Where better to start than with the previously untold origin of the dear Doctor.

We begin in Latveria where we find Werner Von Doom a medical doctor working feverishly on the wife of the Latverian monarch. Unfortunately for Werner he is unable to save her and he is sentenced to death by her husband. He escapes but perishes in the elements as he attempts to return home. The now orphaned Victor Von Doom vows revenge on Latveria. First he studies his late mother’s dark magic. Then he becomes a brilliant scientist and begins studies at State U. There he meets the man who would become his lifelong rival  Reed Richards. Headstrong he races through experiments and eventually it costs him, an explosion causes irreparable damage to his face. He is expelled from school and he leaves for Tibet. He is taken in by monks who help heal is face and forge new armour and a mask for the young Victor Von Doom who hence forth will be known as Doctor Doom. Let the chaos begin…

Next up a new gallery of villains for you to cut out. A reprinting of FF #5 and the first appearance of Doctor Doom.  A pin-up gallery of the members of the Fantastic 4 and Alicia Masters cut, cut…And finally a second original story – The final victory of Doctor Doom.

Doctor Doom has set a trap for the FF as the ruler of Latveria inviting them to the embassy. He serves drinks laced with a hallucinogenic drug and enters the embassy with the FF caught unawares ready for battle. The battle rages all the way back to the Baxter building. Reed calls for a truce and challenges Doom to a battle of minds with a device that Doom also recognizes and agrees to the battle. First they toast to the superior mind as the loser will perish in this battle. The device is activated and after a period of time Reed Richards begins to vanish and is gone. Doom is jubilant – his is the superior mind as he always knew! He leaves the remaining FF to mourn the loss of there leader. When he is gone the still very alive Reed Richards explains he laced Doom’s drink for the toast with Doom’s own hallucinogenic drug and Doom saw what he wanted to see – winning the battle of minds between the two. For his part Doctor Doom didn’t realize he had been duped until FF#39. This book is a must for all Doctor Doom fans. 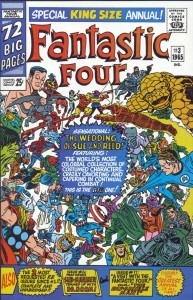 Bedlam at the Baxter building

The long awaited wedding of Sue and Reed Richards is the social event of the season. Doctor Doom apparently wasn’t invited and he decides to attack the FF on their special day with “an emotion changing device”  which will drive all super baddies to converge on the Baxter building and attack the FF. Lucky for the Fantastic 4 they invited all the super-heroes in town to the wedding. Doom turns on his device and all hell breaks loose. It is probably easier to name the noticeable no-shows from this donnybrook than the people who were there. Sub-Mariner and the Hulk – maybe the invitations didn’t make it to Tales to Astonish.  Mercifully the Watcher breaks his own rule of non-interference and offers Reed a device that will stop the carnage (nice wedding present). Once used the battle ceases and Reed and Sue are married. This playful story ends on a playful note with two people being turned away from the wedding by Shield  because they don’t have invitations – Jack Kirby and Stan Lee. 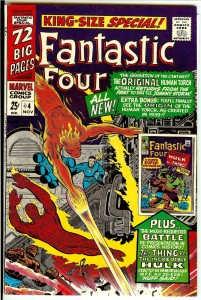 The Torch that was…

In this issue the original Human Torch (Jim Hammond) has been found and is being repaired by the Mad thinker and his “living computer” Quasimodo. The Mad Thinker dreams only of using the Torch as a weapon of destruction. Quasimodo dreams of obtaining a human body for assisting the Mad Thinker. The Torch is confused and we get a brief re-telling of his origin and creation by Doctor Phineas T. Horton. The inhuman Lockjaw, Wyatt Wingfoot and the Fantastic Four eventually do battle, and the main course is the mind-controlled original Human Torch versus the current Johnny Storm Torch. The battle ends with FF escaping, the original torch and the Mad Thinker apparently destroyed, and Quasimodo with his dreams of becoming human. I will confess right here I think this story is the lightest of the six main stories in these annuals. A similar story done better is Sub-Mariner #14 which I do recommend.

Next is the original reason I bought this annual back in the late sixties. Reprints of Fantastic Four #25 and #26 the great two-part Hulk/Thing battle that also featured an early Avengers cross-over. This story was hard for me to find back then and it was a cheap way to get the story. With all of the ways you can obtain a re-print of a book today makes the original reason I bought this book obsolete. 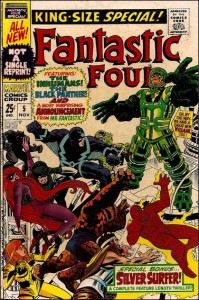 This story features the introduction of the Psycho-Man to the marvel universe. He becomes a long standing villain of the FF and the Micronauts.  This first battle with the Psycho-Man brings together an unusual team-up of the Black Panther and The Inhumans. The Fantastic Four are called in to join the fray before the Psycho Man is brought to heel.

The other big reveal in this book is that Susan Richards is pregnant. This has major implications for the monthly comic and story of Susan’s pregnancy is wrapped up in FF Annual #6.

Up next – This is the plot. A light-hearted story on how Stan Lee and Jack Kirby came up with plots for there comic books (interesting reading for their lawyers). The Juggernaut and The Melter are also in the mix.

The Peerless Power of the Silver Surfer

This story features the first solo adventure of the Silver Surfer. The Surfer comes across our buddy from FF annual #4 Quasimodo. He still wants to be human. The Surfer feels sorry for him and uses his cosmic power to grant him his wish, turning him into the misshapen human form we have come to know. He shows his gratitude by going on a rampage through the city. Bad move. The Surfer gives him the Warlock/ Thanos treatment and turns him into a stone statue and soars away. The Silver Surfer gets his own series about a year later. This had to be a dream book for Kirby and his fans with many of his most loved characters represented in the book. 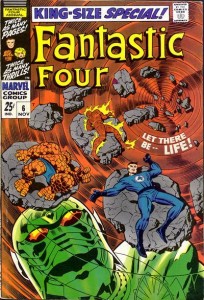 Let there be life…

Our final annual with original content. The pin-up pages and back up stories and articles are all gone. This book is one 40 page story.

Susan Richards is about to give birth. There are of course complications. The rays that changed her into the Invisible Girl in outer space are playing havoc with her pregnancy. It is determined that there is one element that can save her and her child and it lies in the Negative Zone. It is called Element X. The adventure begins and a frantic Reed Richards, Human Torch and the Thing enter the zone. They soon cross paths with ruler of the negative zone – Annihilus. This is the first appearance of another long standing FF foe (also rumoured to be in the FF movie franchise reboot).  Annihilus has the Element X that the FF needs but won’t give it up. A battle ensues and the FF takes Annihilus sceptre (which contains Element X) and flee. The fight continues and just as they leave the negative zone they return the sceptre to Annihilus. Minus a small amount of Element X, which Reed delivers to the hospital. Sue and their new baby Franklin Richards are saved and our story ends on a very happy note.

This is a pretty hot book right now and the Overstreet guide may not reflect the going rate for this book.

Fantastic Four annuals #1-6 is a pretty cool little collection of the Fantastic Four all on its own, and I recommend giving them a try if you haven’t already.