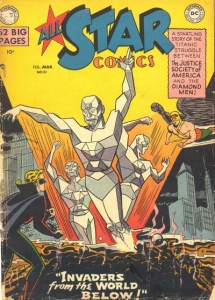 Everything is here, a striking cover featuring our fantastically named villains prominent to the right of the cover staring down a puny Green Lantern to the left. I will concede that an even smaller Hawkman is floating in on the right but we won’t dwell on minor details.

Examples abound of the Golden Age market moving towards stand out covers and there are so many more yet to be “discovered”. Personally I think this is one of the best covers in the whole All Star run. The Diamond Men from the world below look great, I’m surprised these guys didn’t go further as villains.

All Star #51 is a book I’d love to own, as a matter of fact I tried putting in several offers on a CGC 7.5 that’s up on Ebay. The owner and I went back and forth a few times but we ended up a couple hundred dollars apart.

As luck would have it a solid looking CGC 7.0 was in the recent December ComicConnect auction. I tracked the book sheepishly, lying in the weeds so nobody could see me. With a few hours left the book was at around $400. I knew I’d get it and get it cheap! I made my move late but that blasted auto time re-set kept putting the clock back to 3 minutes left every time I bid. This gave anyone else interested in the book 3 minutes to convince themselves they really wanted it. To make a long story short I tapped out at $1,600! Did not get it!

Gah! I went way over my price limit for the book but those 3 minutes gave me time to come up with reasons why I should bid again. So congrats to the winner, surely he was privy to DEIGAC!

Collecting Golden Age is a massive amount of fun, unfortunately the major keys are out of reach for 99% of us and collecting runs is next to impossible because of the value of the keys and because of the scarcity of these books. Luckily for us we can still amass a great Golden Age collection by focusing on things like great covers, character introductions, major characters presence, title strength etc. All Star Comics #51 delivers on all fronts here and you can add that it comes from the very late days of the DC Golden Age era of superheroes. These late 40s and early 50s books are becoming more and more sought after.