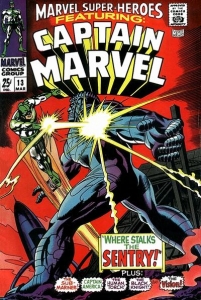 This Spotlight came to me while I was arguing with someone about who was the best female superhero at Marvel.

I’m not saying Captain Marvel is but I am presently this week’s Undervalued Spotlight as Marvel Super-Heroes #13.

Written by Roy Thomas and drawn by the great Gene Colan the 20 page Where Stalks the Sentry story features the 1st appearance of Carol Danvers.

The Carol Danvers Captain Marvel feature film is scheduled for release in March 2019 just 2 short years away. Last summer at the San Diego Comic Con actress Brie Larson was introduced to fans as the actress to play the Carol Danvers/Captain Marvel title role. This was great news to fans, Brie is a talented actor, winning an Oscar for her performance in 2015’s film Room.

The Captain Marvel movie is actually an enormously important release for the Marvel/Disney. The movie has the potential to seat Ms Marvel as the dominant female hero in the Marvel U. Now don’t be so fast to judge and let me explain. There is no question over at DC that Wonder Woman holds the top spot both in their cinematic agenda and in their comic book printing agenda.

This would be a good time to remind everyone just how much star building power movies can have. All I have to mention is Iron Man and Guardians of the Galaxy and you immediately understand just how quickly a good film can move B list and even C list characters to the forefront of popular culture.

Marvel has no Wonder Woman, neither cinematically nor in publishing. Add the fact that Marvel has many of their more famous gals licensed to other movie studios, Storm and Sue Richards at Fox, Black Cat and Gwen Stacy (Spider-Gwen) at Sony and some of their others, like Jessica Jones, committed to TV series.

I’ve always thought Black Widow would be the obvious choice for a solo movie but Marvel seems content at leaving her as a supporting character in the Avengers.

It’s almost by default that Carol Danvers/Captain Marvel gets the nod. I’m looking at this movie as a big opportunity for the character to propel herself onto the top of the Marvel female hero pecking order.

I don’t think Marvel will ever have a Wonder Woman and that leaves the field wide open. Carol Danvers is getting her title shot, if she scores a knock out then Marvel Super-Heroes #13 will become a much more sought after book.

Marvel Super-Heroes #13 has performed miserably over the last 2 years.

So the book has dropped significantly but if you noticed in the data copies in high grade have dried up. As of this post I found 21 available just in the GPAnalysis links but surprisingly none were above CGC 8.0.

High grade copies are actually scarce for Marvel Super-Heroes #13. As of this post only 43 of the 542 CGC Universal graded (un-restored) copies are 9.2 or better putting you in the top 8% of all Universal graded copies. Its obvious owners of 9.2s and higher are not willing to give them up to the current weak market for this book.

Try to grab a nice tight CGC 9.2 when it comes up. You’ll probably have to pay more than the last one got but if things go right your price will look like a bargain in 2 short years.