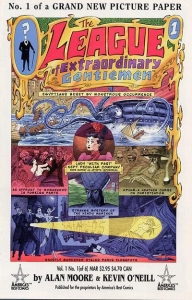 The likes of Allan Quatermain, Captain Nemo, Edward Hyde and Wilhelmina Murray borrowed from the likes of Haggard, Verne, Stevenson and Stoker and thrown together into a comic book like they knew each other all along. This was going to be good.

And it was good, LOEG lived up to expectations and enjoyed critical and commercial success.

So what happened? CGC 9.8 copies barely get $60, the property is stalled, nothing is in print etc. etc.

Well for starters 2003’s LXG happened. This was the LOEG box office movie bomb. The film did not follow the comic hardly at all and many blame the derailing on the LOEG property on this movie. Alan Moore walked away from movie involvement of any kind after LXG flopped.

Alan Moore also happened, he basically moved onto other projects like creative writers of his ilk do.

I’m not sure but my Spidey Sense is tingling and it’s telling me there is more to this property. 20th Century Fox knows there’s more, as late as last year rumors and reports were on the net discussing the studio going back and doing the job right.

Studio and future movie aside LOEG was an epic achievement and LOEG #1 should be a comic trading a lot more briskly (there are no links to copies for sale on the GPA website as of this post) and at higher values that it is getting today.