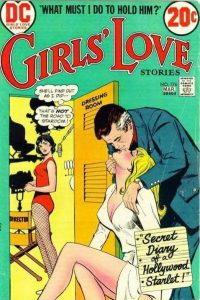 I was so excited about this pick that I couldn’t wait for this post to share it. After the beating I took on my last spotlight though I got a bit gun shy and actually considered changing it. Thankfully the feeling lasted only a few seconds. Buoyed by the Spotlight Mandate of variety and diversity and by the delusion that I know what I’m doing I present Girls’ Love Stories #176 as this week’s Undervalued Spotlight.

The moment I randomly happened upon the cover to Girls’ Love Stories #176 I knew is was my next Spotlight pick. Had I tripped over this issue a few months ago I most likely would have just kept scrolling but I found it last week and immediately identified it’s social relevance.

The Harvey Weinstein scandal has triggered a societal response more akin to a social movement. This scandal is turning out to be a watershed moment, a critical turning point in time where things  change, never to be the same again.

Other prominent entertainment personalities have since been called out for alleged sexual misconduct. Expect more to come. The decade old #MeToo hashtag has found a resurgence thank’s to it’s use as a rally point in this scandal.

Scandals of all kinds come and go, they make good press for a couple of news cycles then fade away. The Weinstein scandal looks to be a tipping point. Rolling Stone Magazine stated the scandal may change our culture.

“Secret Diary of a Hollywood Starlet” is the main story and the cover material to Girls’ Love Stories #176. The cover captures the essence of the scandal and of what some young women had do/have endure while trying to succeed.

I’m no art expert but even the cover art says a lot, the scene happens behind closed doors but someone on the outside sees its an open secret, the body language is telling too, the Hollywood starlet is turned away from the middle aged director, she is not engaged physically with him, even her face is upturned towards him by his hand.

Covers to comics are becoming such important drivers of value, more than they ever were and the trend is continuing. Girls’ Love Stories #176 will certainly become a book in demand simply because it’s cover connects so directly to this pivotal social moment.

I looked around on line and there is just 1 raw copy on eBay for $25. I’m hoping a few more get flushed out.