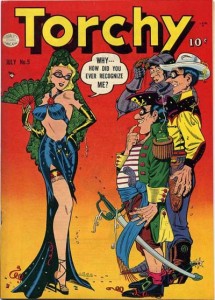 Artist Bill Ward is one of the most popular ‘good girl art’ cartoonists of the 20th century. His most famous creation is Torchy Todd, the goodhearted naïve young blonde whose gorgeous looks and voluptuous features often get her into humorous predicaments almost always of a sexual nature.

Torchy was initially created by Ward for his Navy base newspaper.  Bill Ward was drafted into the Second World War and was stationed in Fort Hamilton, Brooklyn New York. He created the tall, blond, busty Torchy in response to the Navy’s desire for a comic strip that would boost the morale of its fighting men. Ward’s strip was so popular that it was soon syndicated in Military newspapers worldwide. Ward had stated that the legs of War pin-up queen Betty Grable were part of the inspiration for Torchy. That’a boy Bill!

Though Torchy made many appearances in titles like Doll Man and Modern Comics her own title only lasted 6 issues.  A couple of events lead to her eventual cancellation. First, Quality pulled Ward off the title so he could work on other comic titles. Torchy was passed on to artist Gil Fox. Though Fox was a very good artist, much of Torchy’s charm was lost in the translation. Second, Dr. Fredric Wertham, a psychiatrist who advocated comic book censorship, put Torchy at the very top of a list of comic books he considered inappropriate for children. Torchy was an early comic book censorship victim since this was a good 5 years before all the U.S. Senate debates around comic books that eventually resulted in the introduction of the Comics Code Authority.

I’ve chosen Torchy #5 as the perfect representation of this character’s long and storied journey in the comics’ medium. The Torchy #5 cover is a ‘good girl art’ masterpiece. The cover pulls off all the inappropriateness that the character was unfortunately destined for with a magical mix of innocence and subtlety. The cover somehow looks inappropriate at first glance but there’s nothing really going on. It is a very cool effect created by a master of the genre.

– Hard as heck to find so if you do find one even close to guide… GRAB IT!