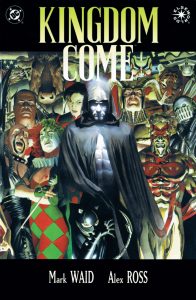 I was set up at the Tri-City Super Con in Kitchener Ontario this past weekend and as part of our set up we were selling some graphic novels. It was after one particular sale that I got the idea that this week’s Undervalued Spotlight should be Kingdom Come #1.

I had sold the customer a copy of the Kingdom Come graphic novel, truly one of the staple evergreen graphic novels for any comic book shop. The guy and I started talking about the book and how much of an impact it made when it hit the stands some 22 years ago. We were also leafing through the thing in awe of the Alex Ross art.

Kingdom Come was great storytelling too. The Mark Waid/Alex Ross combo still reads well today. I’ve always loved the rendering of the older superheroes! We’re all getting a bit older and maybe even a tad heavier but around our shop gaining a bit of weight can always be deflected by pointing out that I’m still Superman – the Kingdom Come Superman!

I’m a sucker for painted comic art, there’s just something to it, a richness that goes beyond pencils and inks. I’m lucky enough to have a few Joe Staton and Don Sutton painted covers from their mid-70’s Charlton romance work. Great stuff! I think I have 9 of them in total. Maybe I’ll ask Scott to feature them in one of his weekly Web Arted columns.

I remember when the 4 part Loki mini series came out in 2004. I fell in love with Esad Ribic’s watercolor style, the paintings gave the story that extra layer of richness. As a quick aside, I’m sure I’ve told the story of how Ribic let me now where I stood as far as he was concerned when I bought him a drink at one of those after Con parties at a Fan Expo a few years back. I would have started something but I didn’t want anything to happen to his painting hand…

Ribic’s work was surely influenced by the amazing Alex Ross.

I’m lucky enough to have an Alex Ross preliminary water color from his Marvels work hanging at the shop, it’s a beautiful bust shot of the Human Torch. I think I’ll ask Scott to dedicate another one of his Web Arted posts to some of the other comic art we have hanging on the walls of our comic shops.

Back to Kingdom Come #1, as I’ve stated above the book is an influential one and the event it launched is a timeless classic, there will always be a demand for Kingdom Come.

Luckily for us Kingdom Come offers up a solid 1st appearance in Magog. IGN had Magog as their 75th best comic villain of all time.

There are surprisingly very little CGC 9.8s on the census, only 85 as of this post which is much less than the 130 showing for Marvels #1 and the 466 showing for Batman Dark Knight Returns #1. Those jet black top and bottom margins on Kingdom Come #1 are such contrasts to all the color in the middle making high grade copies look stunning. At the moment CGC 9.8s are only getting around $170 on the markets.

If you are buying graded then stick with CGC 9.8 White Pages, if you are collecting raw the pick up all 4 issues, it’s the right thing to do.

I think something else to factor in here is the prominence of the Captain Marvel appearance here. If there is one DC character with lots of upside left its Shazam.