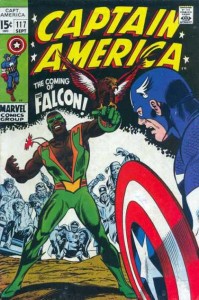 There’s an old saying that goes ‘timing is everything’ and the time seems right for me do dig this one out of my “Future Undervalued Spotlights” file.

I read with sadness today of the passing of Gene Colan. My personal love for Colan came from his work on Tomb of Dracula. It’s funny, as a kid I loved reading Tomb of Dracula but as a 10/11 year old kid I was quite oblivious to the fact that Colan’s art was one of the main reasons I loved the book so much. The man was one of the Marvel giants standing shoulder to shoulder with Kirby, Ditko, Steranko and Adams.

Colan of course penciled other titles including Doc Strange, Howard the Duck and his celebrated run on Daredivil. Gene Colan also penciled Captain America from issue #116 through #137.

Marvel’s Captain America feature film hits cinemas July 22nd and interest in Captain America has increased greatly. Captain America may be a character much more in the public eye if this movie and next year’s Avengers movie are both successful. Look for more Cap movies with strong potential for Faclon appearances though I do think for this movie they should have Cap run into “Private Sam Wilson reporting sir”! True fans will have grins from ear to ear.