[box type=question]With all this “digital” talk about comics I’m interested to know who is reading any comics digitally?  Our group here is a hardcore comic shop group but have we taken a walk on the interwebs and sampled its wares?[/box]

When I got my iPhone in March I downloaded all of these comics applications with the intent of checking them out. I have yet to read a single comic digitally other than the couple of page previews that are available each week on Comic Book Resources, Newsarama and other sites. I tried to view the free Invincible 1 on the Image application and it took too long to download and open so I gave up on it.

Scott: But do you regularly read a web comic?  I consider that digital media in the purest sense, with no output other than the internet.

Kevin: Well, in my head “digital comics” means a traditional comic made available on the internet – usually for a fee, than webcomics, which are more akin to comic strips and are generally free.

I do try to follow a few webcomics when I can: Abominable Charles Christopher, Cameron Stewart, Hark A Vagrant, anything by Connor Willumsen and Emily Carroll, Ed Brisson’s Murder Book, Menage a Trois, and others.

Scott: That’s an interesting take.  To me they’re the same; web comics just operate in reverse, with a print collection available at some point down the line, like The Abominable Charles Christopher. 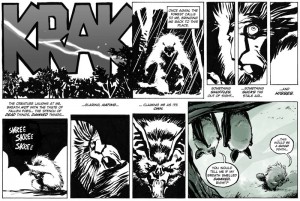 Is the draw to reading web comics that they’re free, or that they’re a serialized story that can be consumed quickly?

Kevin: Most webcomics will never see a print collection, but I find that the draw to most is the sense of community people get from following certain strips and creators. It’s basic community building 101, with the end result of an audience that supports the strip fanatically, comment on them or join their community message boards, and spend their money on peripheral merchandise such as toys, t-shirts, prints, mugs, etc.

They get the same sense of community from reading the same strip. say, every Tuesday afternoon that I used to get, and many of us here continue to get, from going to the comic shop every Wednesday and getting new comics. Instead of seeing your usual buddies at the comic shop, there’s a hundreds – and in some cases thousands – of people doing exactly what you are doing.

I tend to read webcomics in batches. When it occurs to me, I’ll visit the site and catch up on everything posted since my last visit. Those visits can be weeks, months, or even a year in-between. I have my hands full reading print comics, which I prefer. 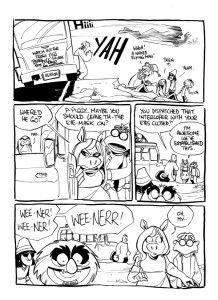 I haven’t yet made the transition to digital comics that I would otherwise purchase in TBP/monthly floppy form. I do, however, read way too many web comics (see list below). I find it’s a lot more democratic (the same reason why I enjoy Tumblr and DeviantArt).

I also came across Muppet Thor as part of the Comikaze 24-Hour Challenge and I’d highly recommend it. However, I warn you that it’s right up there with the last couple of minutes of the Futurama episode of “Jurassic Bark” which is possibly the most poignant TV cartoon moments ever.

Since the question asks what I’m reading digitally, well: 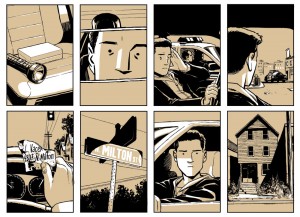 For digital comics, I was thinking the same definition as Kevin – comic books that are available in print and digitally.  I didn’t consider web comics part of the group, since digitally is the only way to read them.

As far as reading a comic in print vs on a computer screen, I will go with print.  I tried reading the digital version of a print comic, but I just prefer print.  I have read some web comics (mainly the ones on CBD), but I will stick with print version.

It is interesting that DC is going to offer deluxe print comics.  The price is $1 more, but you get the redemption code to get the digital version.  They could also offer a free digital copy for a limited time, to get more readers.  Maybe some day we’ll be converted to digital readers, but hopefully not too soon.

What am I not reading digitally is the main question. And the answer is anything DC, Image, or Dark Horse. Because they don’t have an unlimited program.

As many of you know I love Marvel Digital Unlimited. Every comic book company should be doing this. For $60 per year I have access to 8000 comic books and I can read and many books as often as I want. I read them online and never have to download anything. The value is enormous and the product doesn’t really compete with buying floppies every month. The newest stuff online is 6 months old. There are gaps in the titles (mostly from the 80s and 90s) but all in all it is a great experience.

The reader takes some getting used to be you get to see the colours in great vibrant form (which is fantastic for the comics from the 60s). I can’t wait to pick up a tablet with flash so I can see how the experience is further enhanced.

Charging $2 for a digital comic book is too much. That is what we want to pay for a real comic book, not a virtual facsimile. The digital medium is all about reading the comic book, not collecting it. I am not “collecting” comic books if I download them to my computer. I am merely using that medium to read the stories.

I would love to see DC’s stats on how many digital same day downloads it gets compared to how many floppies it sell once the relaunch comes in September. I don’t think that digital needs to be up to date.

I see it sort of like movies. If you want to see the picture right away you go to the theatre, if you can wait you rent it on DVD. That is the model that I would use for digital comics. If you want the story right away you go to your local shop and buy it. If you can wait you let it get digitized and you pay your subscription to access an ever-growing library of awesomeness.

Digital Unlimited made me buy more comic books, not less. I read the Ed Brubaker Captain America run and loved it, so now I will buy the new series. I loved the Annihilation stories so I picked up the Thanos Imperative. Giving unlimited access to older books will only transfer into new sales in the long run.

As far as mainstream comics go? Nothing. Yet. 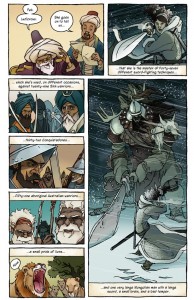 As I said earlier digital comics to me are any comics distributed digitally, and for the majority that means web comics.  There’s a vast wealth of material available but what draws me are those works by people who also produce print comics: the material seems better produced, with an eye towards print publishing at some point.  While I read The Abominable Charles Christopher and Sin Titulo my current favourite is Delilah Dirk by Tony Cliff; my picks do seem to come from Canadians but that’s coincidence, or patriotic fervor.

Like Kevin I dig some poking around when I bought my iPhone its screen is too small for reading comics: format for digital consumption is extremely important.  I didn’t realize how wonderful the experience could be until I picked up an iPad 2 this summer: now I’m enjoying comics and magazines digitally, with crisp colour and the ability to zoom in.

Unfortunately web comics don’t get the credit they deserve because they’re free so we don’t assign value to them.  That’s evident from the feedback that they aren’t considered in the same group as mainstream comics.

Pricing on digital comics seems to be an issue as well.  Production costs for print and digital are the same right until the final process: either the work is printed and distributed or electronically distributed.  Creators, editors, production staff and distributors all need to be paid: the only cost saving for digital comics is cutting out the printing.  Instead of Diamond warehousing and shipping digital comics have Comixology and others distributing electronically.  Print comics after three to six months end up in the discount bin while digital comics are being discounted the longer they’re available.

For now there’s enough room for comics in any medium to be read and enjoyed.