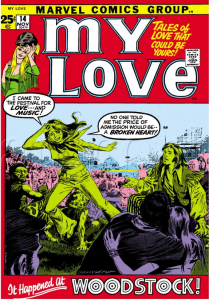 This is a bit of a deviation from my standard Undervalued Spotlight format. I’m featuring Marvel’s entire November 1971 line up using the worthy My Love #14 as the ambassador book.

I’ve chosen My Love #14 to represent the group of books for many reasons. My Love #14 is the only romance title Marvel offered in November 1971 and in collecting circles it is a coveted prize in high grade.

The grey-tonish Gray Morrow cover is beautiful depicting the Woodstock music festival (fittingly held August 15th-18th 1969), this post marks the 42 anniversary of the end of the festival (and many say an end to the Aquarian dream of a utopian society). But I digress.

The 7 page cover story “It Happened at Woodstock!” features Gray Morrow art and a Gary Friedrich script (Freidrich is probably best known for all his Sgt. Fury stories and for co-creating The Ghost Rider). The book also features a story drawn by John Romita and another drawn by Don Heck, there is even an old Jack Kirby reprint story.

My Love #14 is ridiculously hard to find in high grade. The CGC Census shows only 1 graded at 9.4, 2 at 9.0 and 2 at 8.5, the last recorded sale was an 8.5 back in 2005 that fetched $76 dollars. Do you want to make yourself some money? Ask your Aunt if you could look through her old comic collection, give her some good money for My Love #14, get is graded, put it up for auction and then enjoy your holiday down south!

I think My Love #14 is a good November 1971 ambassador. Now let’s talk about the group as a whole.

In October 1971 Marvel cover prices were 15 cents but the House of Ideas had an idea, they were going to raise prices to 20 cents. The price increase Marvel wanted represented a 33% increase and fearing a consumer backlash they decided to insert a 25 cent giant 52 page issue as a buffer. Now that December 1971 20 cent issue will be 20% cheaper than the issue before. Brilliant!

Whether it was a good strategy or not is irrelevant because the plan produced one of the neatest collecting strains in comics. As far as I’m concerned November 1971 is Marvel’s best month ever!

Unofficially I counted 28 Marvel releases in November 1971. Surprisingly not all the comics adhere to the 25 cent giant format. There are 4 titles that went straight to a 20 cent cover (Amazing Adventures #9, Sgt. Fury #93, Creatures on the Loose #14 and Two Gun Kid #101) while 2 titles held on to the old 15 cent cover (Marvel Spotlight #1 and Li’l Kids #3).

Of the 28 titles 3 are actually annuals (Mad about Millie Annual #1, Millie the Model Annual #10 and Sgt. Fury Special #7) while another 4 are reprint titles that already had 25 cent deluxe formats (Mighty Marvel Western #15, Marvel Tales #32, Marvel Super-Heroes #31 and Fear #5).

All this leaves us with 15 core books that adhere to the 15 to 25 to 20 progression. Here we get some very famous issues. I’ll list all the books here for completeness;

Almost all the books deliver something special, Iron Man #143 introduces the Guardsman, Daredevil #81 is the start of the Black Widow run on the title, Hulk #145 retells the origin of the Hulk.

What’s even more fun is that some of these are almost impossible to find in higher grades and yet prices are very reasonable (for now). The CGC Census shows no Kid Colt Outlaw #156s graded, I have not had one as a comic book reseller for years, it’s a tough book, as many of the others are.

I remember when Big B Comics first opened back in 1996. One of the first things we did was feature “The Books of November 1971” in our old comic showcase. They are going to be a lot harder to amass this time around.

This list is unofficial so please add any that I may have missed.

So let My Love open the door to the wonderful world of Marvel’s November 1971.