This largest ever offered collection of WECA comics keeps on rolling out from out of the Land Beyond the Mists (we may never find out the source of this collection because Jon Signorelli tells me that the owner wants to remain completely anonymous). It continues to shake up price points and demands some adjustment to our WECA comics price guide (but nothing drastic because remember, our price guide is first and foremost a detailed and comprehensive checklist of these 760 books or so and only secondarily a pricing ‘bible.’). Let’s see what we can take away from these latest results from the auction which ended on Oct. 27. There were 32 WECA books on offer bringing this year’s total on ComicLink to 128 so far and I can see from the ComicLink Fall Preview Auction that we’re not done. Here is the full table from this auction in descending price order: 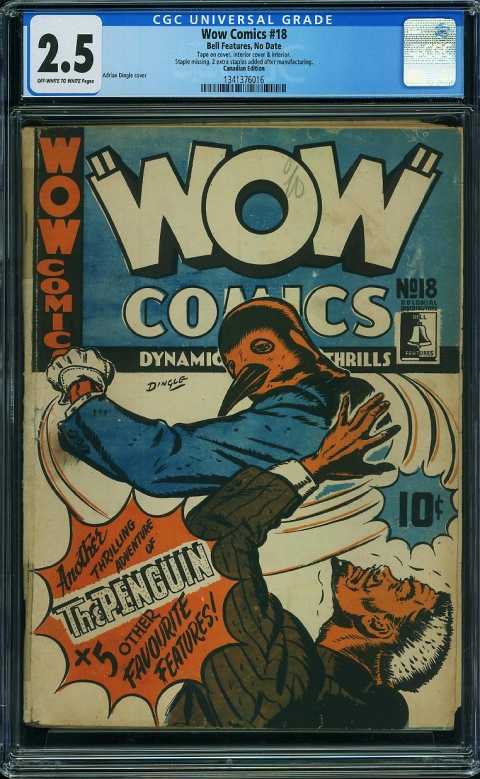 So here we go. Let’s look at the top price getter. Wow 18 is THE classic Dingle Penguin cover and probably one of the harder issues of the run to find. This copy is notable because of the colour difference to most other copies. My own copy and the Library and Archives copy are two-colour red and yellow covers while this one is a two-colour red and blue copy. Maybe Bell ran out of yellow towards the end of the run and substituted red. Are key Bells such as this from now on going to settle at around $3000 at the 2.0 level? 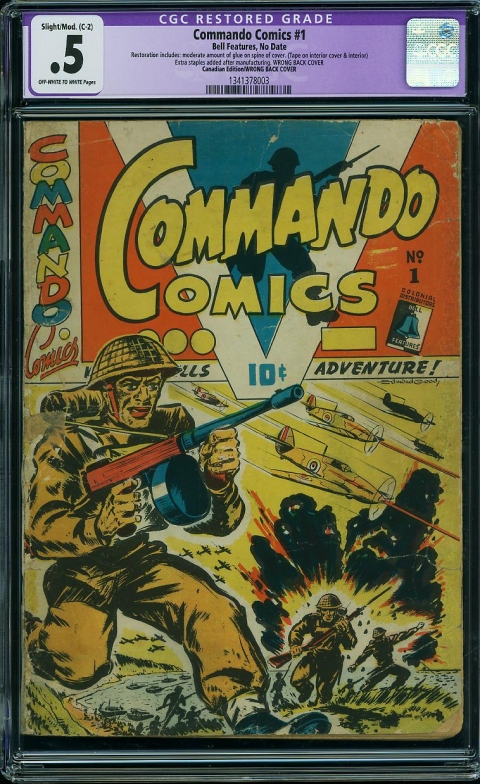 The next book was a restored Commando 1, another Bell book that is relatively hard to find. The grade was a purple (C-2) 0.5 because of tape, staple replacement and the attachment of the wrong back cover but it still fetched 3 grand. The popularity of Bell’s full war title with it’s great WW II soldier covers proved its force in the last ComicLink auction and has extended to the Commando 3, a qualified 5.0 with a coupon cut from the back cover. Even the incomplete Commando 11 got over $200 which was probably the base for a 2.0 Bell run comic a year or two ago. The 0.5 Triumph-Adventure 4 got $2600. These Hillborough issues are extremely difficult to find and make me think of the usefulness of putting together a WECA comic registry for the rare, hard-to-find issues so that we can better understand and estimate how many copies of these issues actually exist and are in collections. But this issue does have an early Nelvana story in it and a great Andre Kulbach cover. 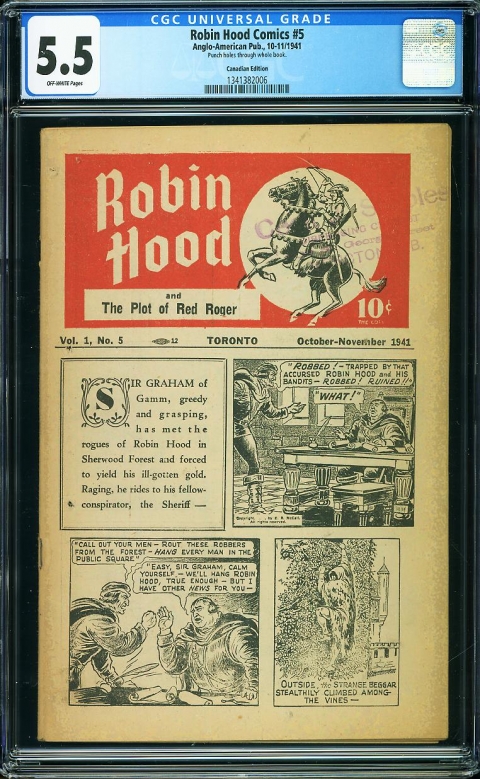 Any 1941 and, to a slightly lesser extent, any 1942 WECA books are extremely desirable and you really can’t go wrong picking them up. A good example is the Robin Hood Comics Vol. 1 No. 5 which graded at a 5.5 even though it had some sort of pin holes punched through the entire book. The first year of Robin Hood Comics consisted of individual issues that were cobbled together from the Toronto Telegram dailies with panels being cut up so that there were six panels to a page and one continuous story through the book. The first five issues of these had covers that featured cut-up daily panels along with the Robin Hood masthead and no real central graphic or image. I think that these early Robin Hoods have a neat, old fashioned, almost manuscript look to them. Again, they are hard to locate and are worth picking up when you can. 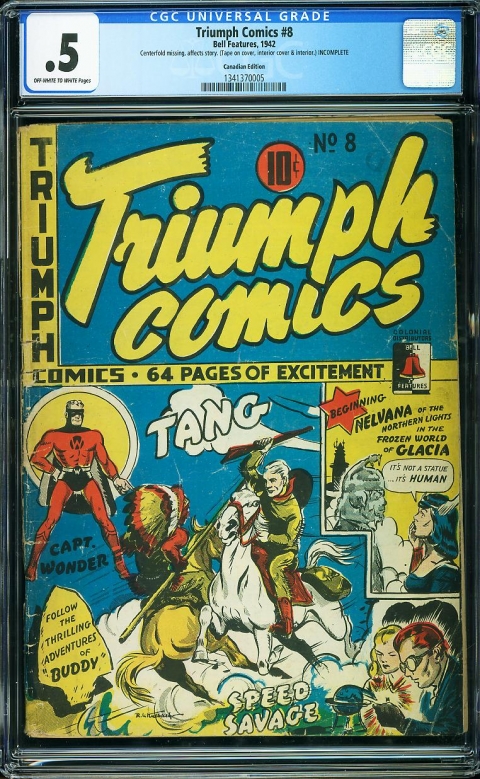 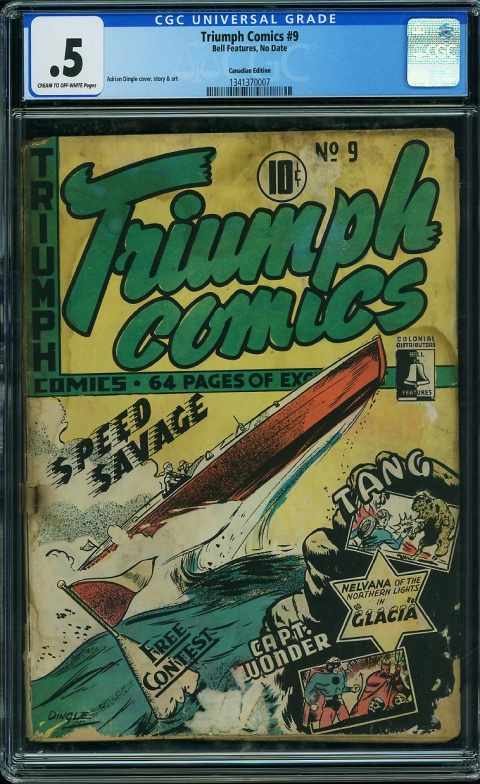 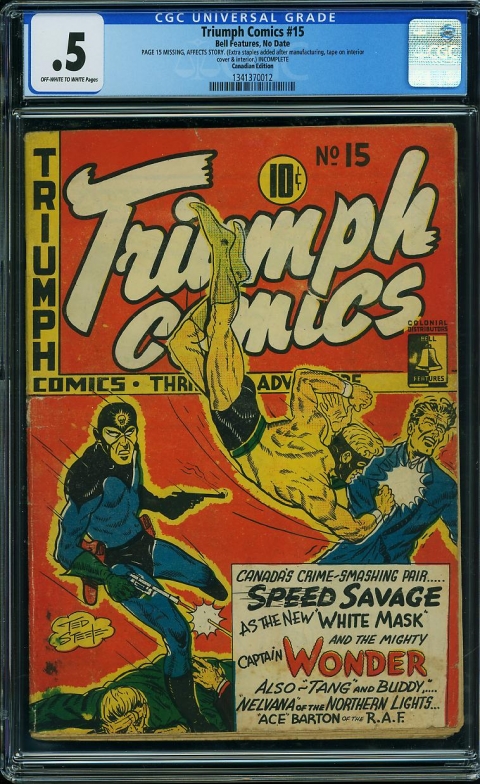 Three Triumphs, 8, 9, and 15 (all 0.5s) also made the top 10. 8 and 15 were incomplete, while 9 was a water-damaged and soiled copy. Bell Triumphs are in demand, of course, because of the Nelvana stories and covers and each of these fetched over a grand for poor condition copies. 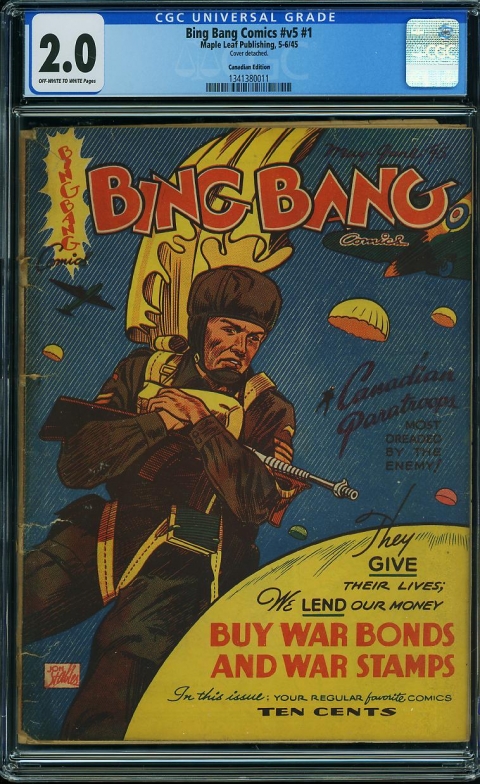 A later Bing Bang with a Canadian paratrooper cover (Vol. 5 No. 4) in 2.0 reached $1049. Bing Bangs, I think, are among the scarcest of the Maple Leaf comics and this one with a war cover certainly made a statement. 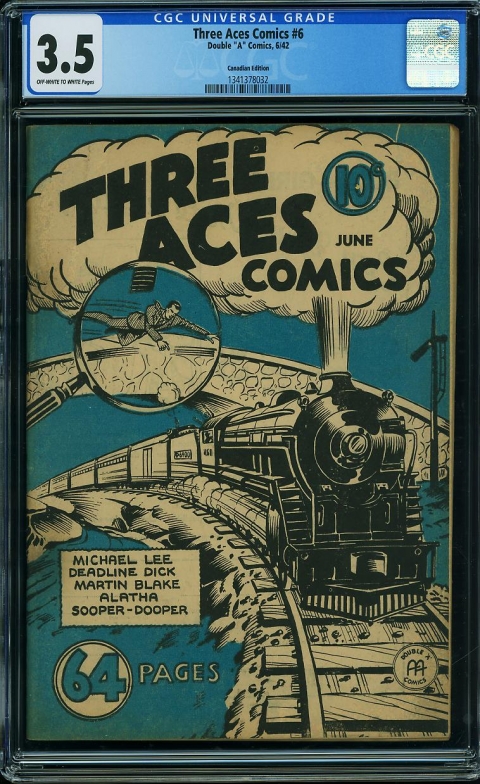 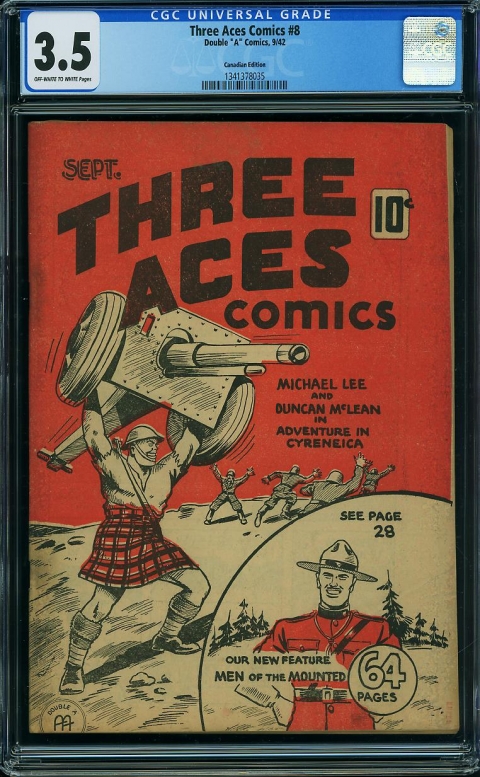 The last two comics to round out the top twelve books from this auction were two early Anglos, Three Aces Vol. 1 No. 6 (which is really No. 5) and Vol. 1 No.8 both in 3.5 and they both broke the $1000 barrier. I think that these early Three Aces, before the decision to go in the direction of the Fawcett character redraws (in the case of Three Aces, Bulletman redraws) in early 1943, are a rich trove of original Canadian characters with some great two-colour covers and are worth the money (I only wish I had it).

It looks to me like a market still trying to find a footing on solid ground and the question is how far above sea level this will be. But you can’t deny that there’s something special about these books and by owning one or more of them in your collection you know you’ve got a rare and special part of Canada that most American collectors just wouldn’t appreciate in the same way. It’s still part of the hobby or pastime, or whatever we call it, that we know as comic book collecting but this time it involves the added elegance of something which we can distinctly call our own and doesn’t belong to or emanate from the American juggernaut. Sure, speculators, and a few of these might be Americans, may jump in to get on a profit minded ride, but these Canadian war-time comics do feel magical when you hold one in your hands. In comic book collecting there’s always the magic of finding those books from your childhood, or finally finding that elusive first issue or book that completes a run on a dealer’s wall or in a long box, or even coming across some obscure golden age gem you thought you’d never see. But collecting war-time Canadian comics is a marvelous road less travelled that eventually gets you back home to some things you didn’t even know belonged to you.

As exciting as the past four ComicLink auctions have been in terms of WECA book results, the most exciting act is just around the corner. The Fall Preview Auction, which begins on Nov. 17, is offering a couple dozen more WECA comics, but what comics they will be! There will be 5 first issues that should produce crazy results because it’s safe to say that there are fewer than 8-10 (if that many) of these in existence.

The first is Canadian Heroes Vol. 1 No. 1 at a solid 5.0. This is the first war-time comic published in Montreal and the first Educational Projects book. 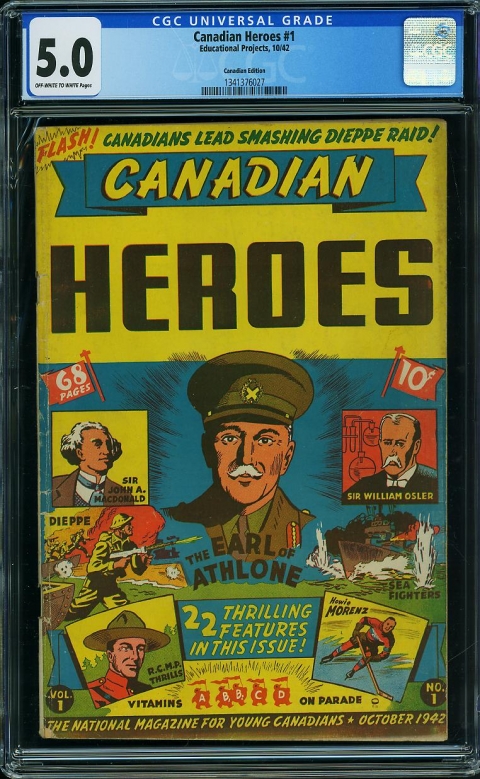 The second is a Three Aces Vol. 1 No. 1 at a 3.0 that looks way better. This was the last of the first four original Anglo-American titles coming out just at the end of 1941 and is an extremely hard book to locate. 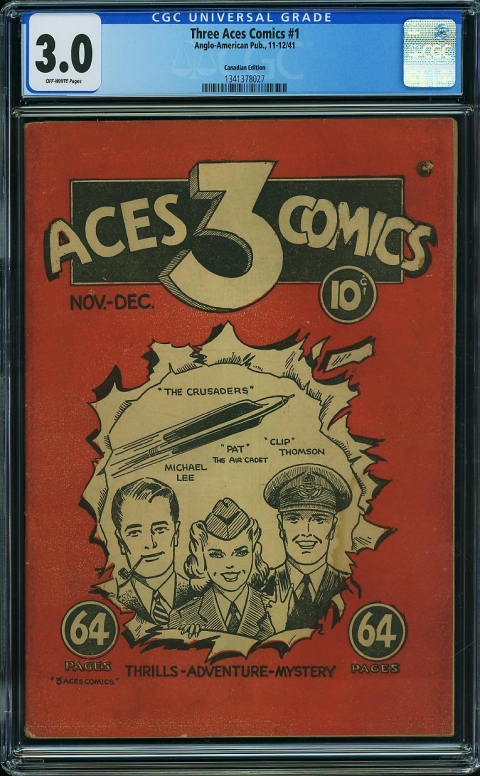 The next (and I assume I’m presenting them in order of the prices they will achieve from lowest to highest) is Bell Feature’s Joke Comics No. 1 at a 2.5. All other copies I’ve seen of this, including the Library and Archives copy, have a small yellow 10 cent paste-it note type sticker, just big enough to cover that original 25 cent price tag. Perhaps this one was carefully removed or never had one. The speculation is that Bell originally intended this book to sell at 25 cents but changed his mind as it was ready to go out to the stands and place these 10 cent stickers over the original price. The book is notable for the1st appearance of Ted Steele’s Pvt. Stuff as well as the 1st appearance of Spike and Mike who were created by John O’Henly and later taken over by Ross Saakel but, most importantly, this book contains the first full story in comics by Mel Crawford with his “The Three T’s.” Mel, of course, went on to become a much bigger phenomenon south of the border during the 1950s and on. 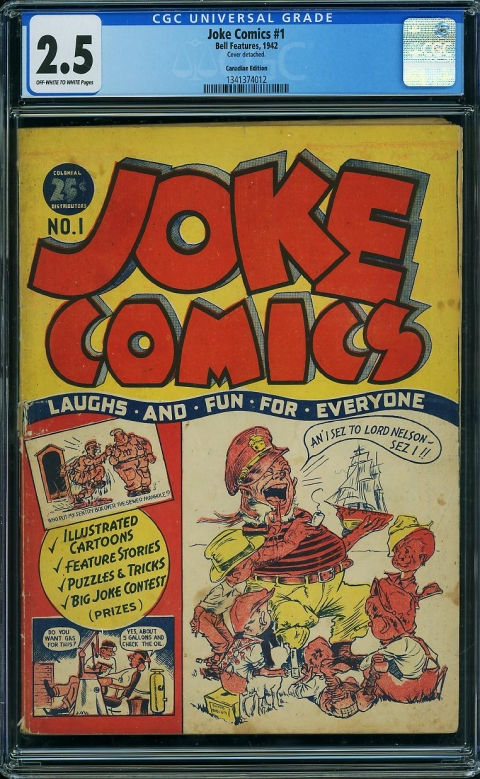 The fourth book is Maple Leaf’s Lucky Comics Vol. 1 No. 1 at 3.0. This book is notable as Canada’s fourth comic book title, coming out just before Triumph-Adventure No. 1. It features the 1st appearance of Ernie Walker’s “Peter and Peggy in the Haunted Castle,” “Wings over Lion’s Gate” and most notably the 1st appearance of Phil Dauntless in Bert Bushell’s “Ether Escapades.” Phil becomes The Black Wing and gets a cover in issue 10 of the title. 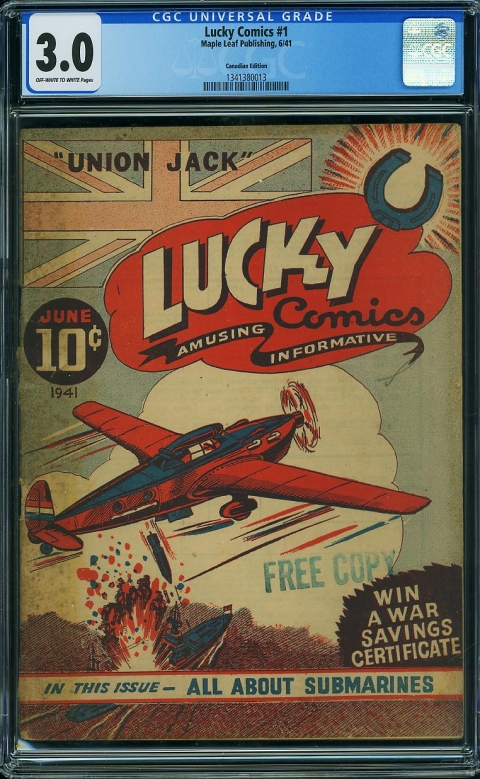 But the big cheese of this whole auction for WECA collectors will be the offering of the heretofore mythical Robin Hood Comics Vol. 1 No. 1. 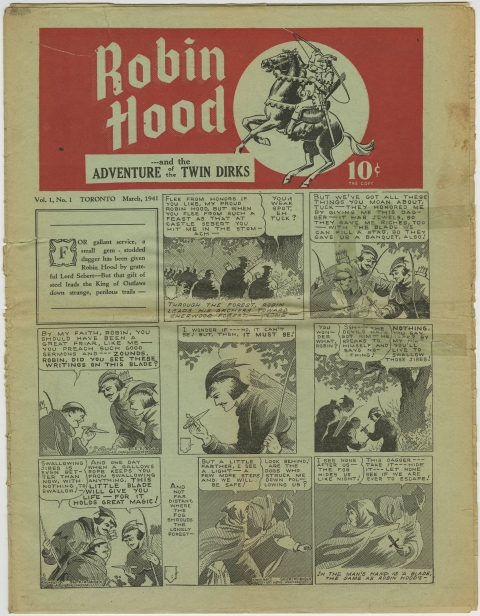 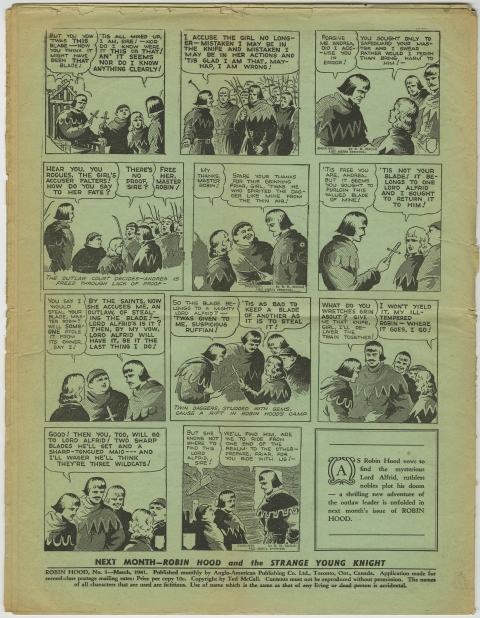 I, myself, have never seen a copy of this book before and I haven’t come across a collector who has. It’s tied for the first Canadian comic book prize along with Better Comics Vol. 1 No. 1 because they both have cover dates of March 1941, but we usually concede the honour to Better No. 1 because it looked like a comic and the other was a folded tabloid-sized newspaper and because, as I’ve said, nobody had ever seen a copy before. Because of its tabloid size, the book has not been slabbed and the folds are evident, as well as the presence of some tape. Its contents are the dailies that appeared in the Toronto Evening Telegram a couple of years ago. I believe it is the only known copy and maybe the only copy that ever surfaces and if someone can get this into their collection, then you’ve really got something. For these reasons, I think that this book will achieve the highest known auction price ever for a Canadian comic and there may be some American pockets that open up for this one. Start organizing your funds now if you plan to go for this one, I can’t wait to see what kind of fireworks happen. (The slabbed 2nd and 3rd issues of this title are also on offer in this auction.) 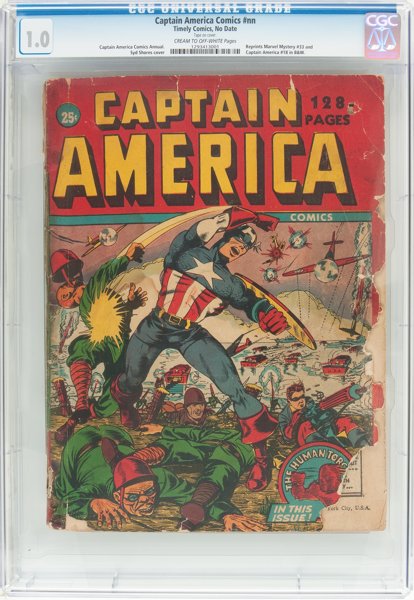 Also on offer over at Heritage is the Captain America 128 pg Annual at 1.0. This book does appear in Overstreet and is called a Canadian book mainly because the interior is black and white, but I’m not so sure that it was printed in Canada or even distributed in Canada. The CGC blue label doesn’t say that it is a Canadian comic. We’ll figure this book out someday.

Lastly, just a quick announcement that Hope Nicholson and Bedside Press are putting out a reprint of Ross Mendes’ Polka Dot Pirate Stories and it should hit stands this month. What I’ve seen looks great and I hope everybody will pick up a copy. Bedside is also close to finishing a reprint of Wow Comics No. 1 thanks to Jim Finlay’s efforts in scanning his copy. That should be a treat too when it comes out. 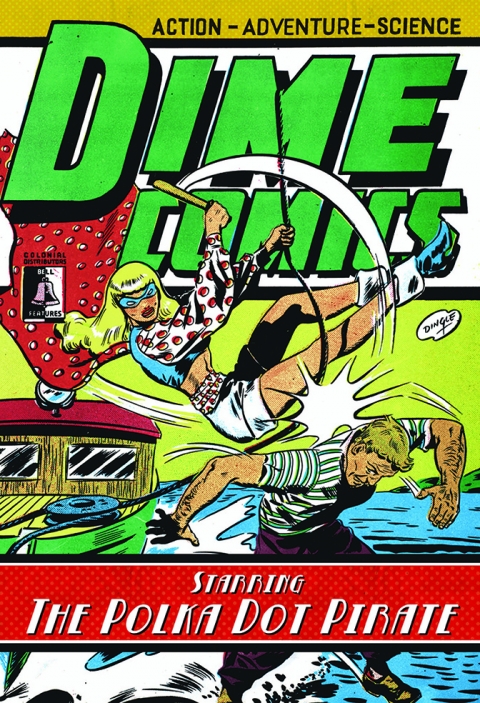 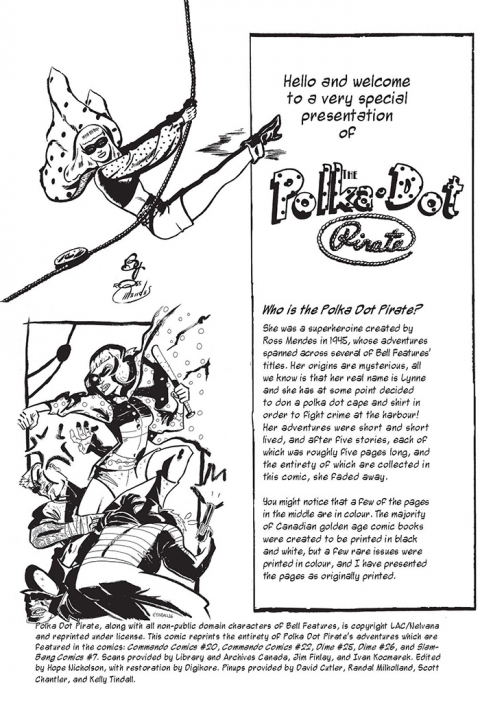