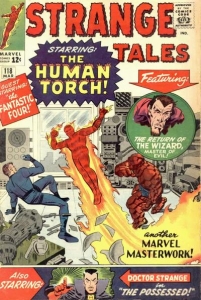 I’m actually very excited about the Doc Strange movie that’s about to open up in North American theatres this coming weekend. I’ve seen the clips and I’ve read the reviews, now to see the movie. Can’t wait!

I thought it would be topical and fun to whet everybody’s whistle, to get everyone stoked for the big event. Not that spotlighting a comic with Doc Strange in it that I think is undervalued should make everyone run to the nearest Cineplex… Anyway it seemed a good idea when I started so I’ll see this through.

This week I shine the Undervalued Spotlight on Strange Tales #118.

Strange Tales #118 delivers some solid foundations for us to build future value on. The issue represents the 7th appearance of Doc Strange if I read my chronology correctly. Very early appearances of major heroes are always in demand. These are early days of Doc Strange and of Marvel itself.

Our issue represents the 1st Doc Strange cover, though only an inset on the bottom there is no denying that Ditko rendition of the Doc. Fantastic Four #27 from June 1964, I believe is the first full Doc Strange cover. Covers matter, they represent an important ingredient in the value recipe and a major character’s 1st cover appearance is something both collectors and investors want.

Strange Tales #118 has the 1st appearance of the Orb of Agamotto. The Orb is a crystal sphere used by Doc Strange to detect other magic. It showed up in one of the Thor films I think. To understand the importance of the Orb we must visit Agamotto himself. Agamotto along with Oshtur and Hoggoth make up the Vishanti, a group of superior mystical entities summoned by sorcerers. It is said that Agamotto was the 1st Sorcerer Supreme. From Agamotto came the Eye of Agamotto and the Orb of Agamotto. I’ve always like these artifacts in the Marvel U and I’ve covered the Wand of Watoomb and the Cosmic Cube in past Spotlights.

My position on Doc Strange is this, either he becomes a big deal in the Marvel U or he doesn’t. As of right now he belongs more to the old Marvel crowd than he does to the general pop culture crowd. I’m betting the movie changes all that. I’m betting that Strange becomes cool and I’m betting key issues from the early days become more sought after.

Recent sales include a CGC 9.0 that went for $218 and an 8.5 that went for $144, both prices under Guide. The book is truly being overlooked. I’m thinking now’s a time to pounce on a nice tight copy and wait for the Market to come to their senses.