Last post my subject was Bus Griffiths and his truly Canadian contribution to the WECA period as well as how this was revived and reworked into one of Canada’s first graphic novels. As a continuation of that post, this time I’d like to concentrate on the very first “Now You’re Loggin’” strip and the vehicle in which it appeared, Name-It Comics No. 1 from Nov.-Dec. 1941. In doing this, I’d like to thank Jim Finlay who made the details from his copy available to me.

By the time Name-It Comics came out, Maple Leaf’s first title, and Canada’s first comic book, Better Comics had already had eight issues out and its second title, Lucky Comics (at that time known as “Union Jack – Lucky Comics”) had half that. The other title that came out concurrently with Name-It Comics was Bing Bang Comics with its lead and cover feature being the adolescent, Denis the Menace type of trouble maker, Pinky.

As mentioned last time, the “gimmick” of name it comics was that it would have a contest where the readers of this issue would choose its name for the next and subsequent issues. The winning name was Rocket Comics and this is the title it bore until the end of its run in 1946.

The cover of Name It Comics displays a collage of its five different content features. The lead-off feature, and the one most associated with Rocket Comics, is “Cosmo and His White Magic” by Spike Brown who also was the creator of British Columbia’s Police presence “Sargent Canuck” in Bing Bang Comics. This is the story of wealthy Canadian scientist Cosmo Grant who carries on his late father’s work developing a number of gadgets and formulas that give him amazing capabilities. As the series goes on each one of these creations becomes a “Cosmo-this” and a “Cosmo-that” much in the vein of the Silver Age Batman.  After dealing with the Axis throughout the war Cosmo and his pal Hoot find their way down to Atlantis for the final issues.

After this comes a detective/espionage type of series by Bert Bushell called “The Case of the Lost Mind” starring John Henry. Both of these series were fairly short-lived in the title.

The fourth feature in the book is “Roaring Rails” by Vernon Miller and Miller seems to start the series again after already having two episodes in the first two issues of Better Comics. It stars railroad engineer Steele (one of the most common first and last names used for characters in the WECA books) Dawson and how he deals with the sabotage of one of his trains.

The fifth feature stars expert aviator Sid Stacey and radio whiz Tom Masters, two Canadians who take on fifth columnists based in a local mountain. The name of the series is “Mystery Mountain” and it’s written by Ed. Warden and drawn by Verler (Vernon Miller). The thing to notice is that Maple Leaf Publications main man Vernon Miller has three different “by-lines” in this book. For the feature he created (“Roaring Rails”) and both wrote and drew he uses the full Vernon Miller, but for the features he supports with just his artwork he uses “Hope” and “Verler.”

The book closes with Bus Griffiths first “Now You’re Loggin’” story (notice the final “g” is elided here but the solid engma is there for the graphic novel title more than 35 years later). Bus was 28 when this first “Loggin’” story was published and had probably been working as a faller in the BC woods for a number of years and right through the heart of the Great Depression.

Here is the strip in its full nine pages. We’re introduced to job-hunting Vancouver city boys Alan Richards and Red Harris who make an impetuous decision to try logging and are sent on an over-night boat up the coast to Bradley’s Logging Camp. We do encounter these same guys in the graphic novel but there they are already full-blown, seasoned loggers and this makes these prequel comic book “origin” stories that much more precious and important pieces to accompany the Bus Griffiths “Now You’re Logging” master work. Here in their first appearance they remain in suit, tie, and fedora for the whole first half of the strip. On the long walk down road from the boat to the camp they meet heart throb Helen who is the daughter of a local farmer. In the graphic novel, Al meets Debbie Brown, daughter of a former logger and now homesteader and, in fact, proposes to her on the very last page which fades out at a silhouette of the couple sitting together in the final panel. To round off this very first installment, Griffiths throws in some skillfully layered crises that promise quality drama and excitement in episodes to come. 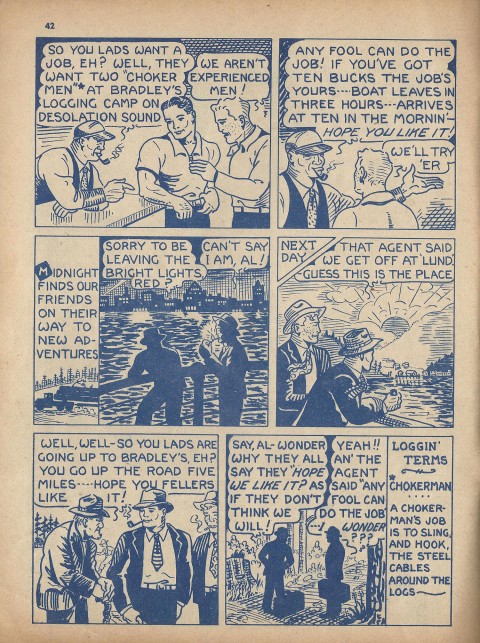 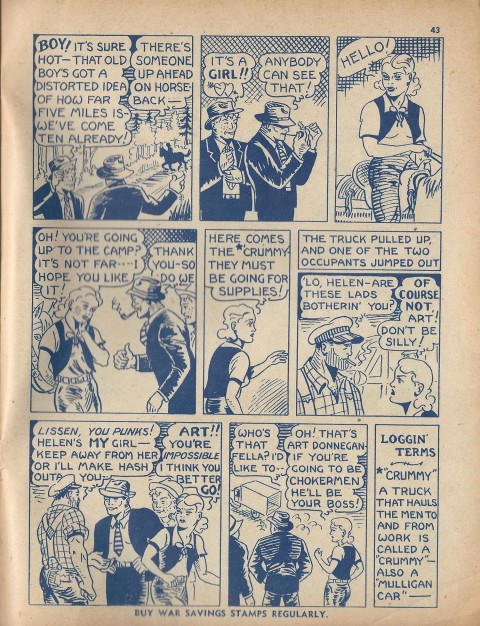 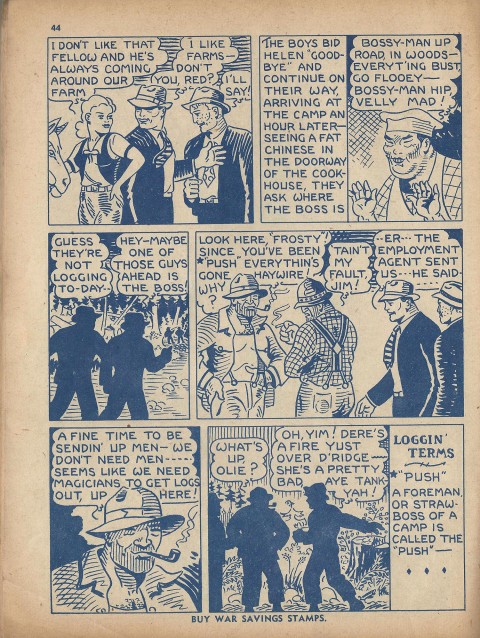 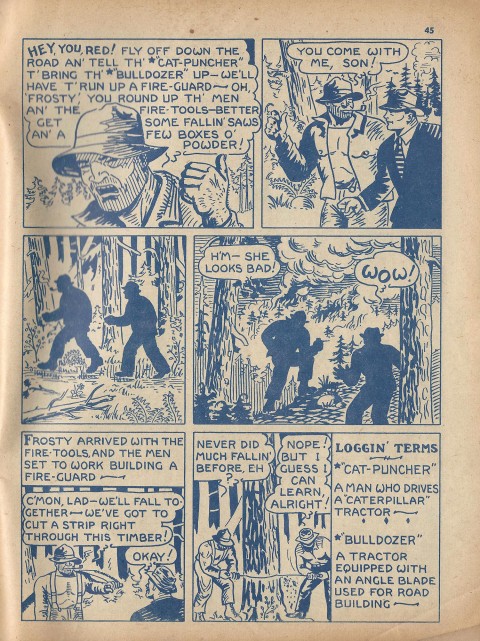 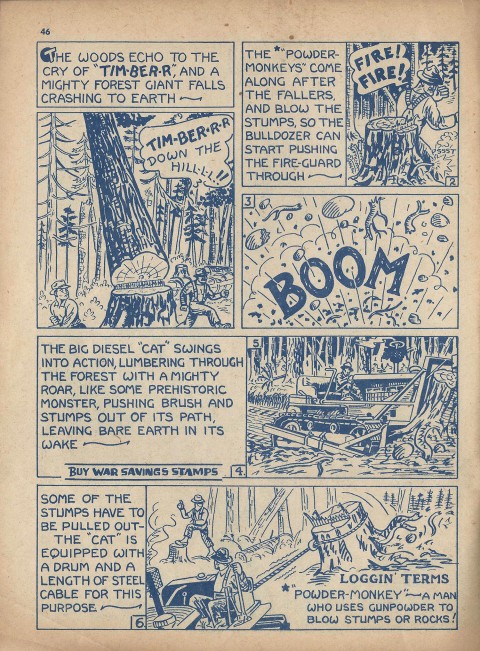 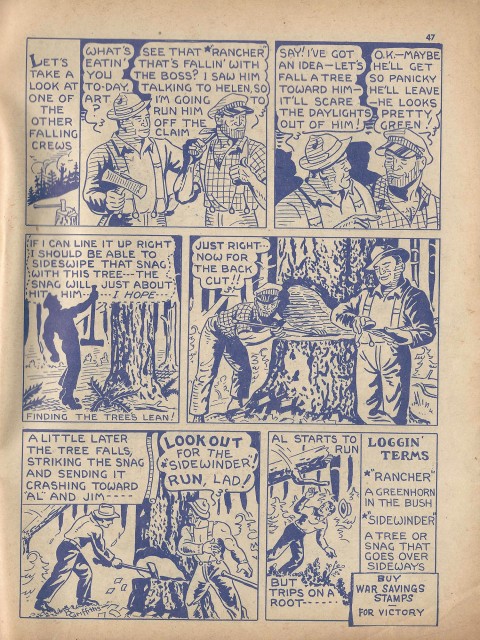 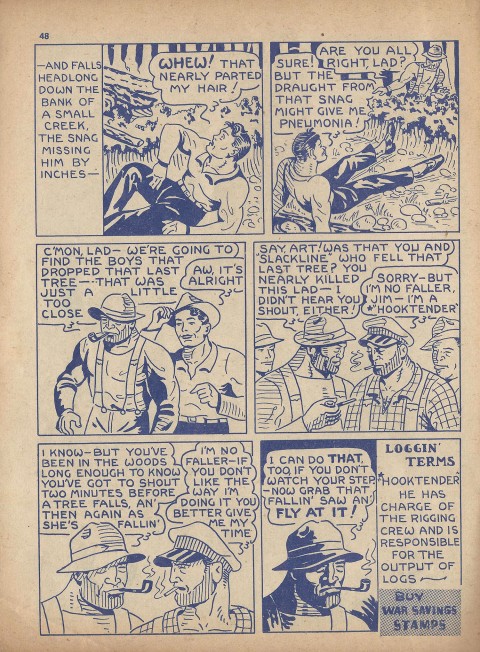 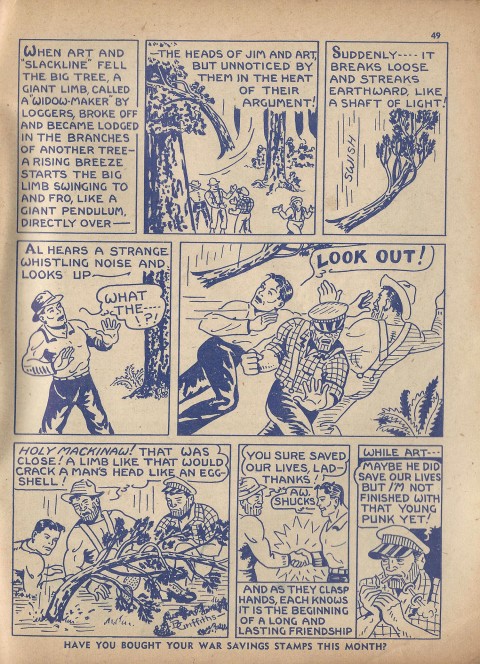 The important thing to see here is that this idea has already jumped complete from the forehead of a 28 year-old Bus Griffiths and in this first incarnation shows the care in detail and density of technical terminology that is the hallmark of his graphic novel that revived this original idea a generation and a half later. These stories from Rocket Comics deserve to be reprinted as a complement to the next edition of Now Your Logging.

Thanks again to Jim Finlay for sharing the contents of his copy of Name-It Comics.