The two posts over the last week by Mike Huddleston “Why Did the Original Silver Surfer Run Fail” and “Comics as Emotional Assets” by R.J. Steinhoff both brought up some interesting thoughts for me.

The Silver Age Surfer run for me is one of my favorite runs ever. I have often acknowledged just how much our hobby has to do with nostalgia, i.e. emotional assets.

The series was, on a commercial level at the time, a failure.

Fully acknowledging in advance how much this affected me in my youth, I was very disappointed in the run by the time it got to the final 3 issues and certainly was genuinely disappointed when the series changed from double sized $.25 to the new Bronze Age $.15 price that hit on issue number eight.

There was an editorial decision, if I remember correctly, that Marvel made to have fewer if not almost no continued stories. I found this very disappointing and that was one of the reasons why the Bronze Age for me lost a little bit of lustre.

Back to The Silver Surfer and emotional assets. After reading Mike’s column, I reread issue #5. Now everyone loves #4, the epic Thor issue that is probably one of the best examples of what this medium can be, and that is followed closely with #3, the first appearance of Mephisto, and as I have written before that issue actually scared me as a boy because of the representations of Hell and the consequences of choosing evil over good.

Number one is a well loved book but often it was a disappointment to many readers as it was such a departure than what I think most people were expecting from the Lee/Kirby representation of the Surfer. Number two is probably the most readily available issue and is rarely praised although in revisiting these emotional assets, the introduction of the Badoon was and remains an interesting representation of an alien race that was genuinely uniquely designed by Buscema.

Number 5, 6 and 7 have always been favorites of mine. The Al B. Harper character was well written and it was subtle how Lee wrote the character and how you could feel the underlying racism in the story. I thought that then and now upon rereading it still think it was brilliant. The artwork by Big John Buscema with inks by Sal Buscema were outstanding. I encourage you to take another look at this story and really see what a masterful job was done on this issue.

The issue started with a bang, in the Baxter building and ended as a tribute to the selflessness of Al B Harper and his incredible example of all that is good and noble in the Human race.

I will leave #6 and #7 for another time. They are also exemplary issues that need a little exploration and deserve more than a quick note in passing. 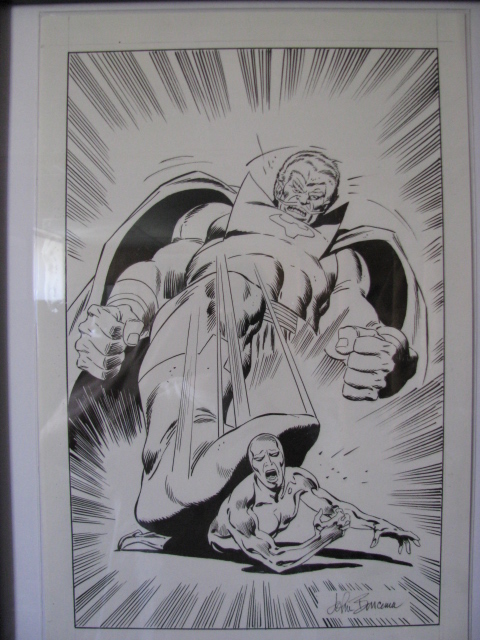 For your artistic enjoyment I have attached from my personal collection Big John Buscema’s alternate cover for #5 which I find much more dynamic than the published cover, and also his recreation of #3 which is one of my favorite pieces and needs to be seen to be believed. Big Johns inks are incredible! If you want to see more go to www.comicdenn.com.