With April Fool’s day just passing by, I want to bring attention to perhaps the quirkiest comic creator from the WECA period, Tedd Steele.

Theodore Arthur Steele was born on April Fool’s Day, 1922 and his creative juices must have been charged with the mischievous and wacky energy that impels that day. Before beginning in comics, and just after turning 19, he did a cover for the Canadian pulp, Uncanny Tales No. 5 from May, 1941, its first large-sized issue. His earliest work for Bell Features was taking over the “Dixon of the Mounted” feature from E. T. Legault in  Comics 3 (April, 1942) where he signed the splash “Theodore Steele” and continued with it through to issue No. 8.  A couple of months later in June, 1942 he produced his first original strips entitled “Pvt. Stuff” in Joke Comics No. 1 as a simple two-pager and, perhaps most significantly, “Speed Savage” in the first Bell Features Triumph Comics No. 7.

A couple of years later Ted Steele pulled another pair of original strips out of his hat and these were “Woody and The Wolf” where a comic book artist decides to stop a mad scientist from growing dinosaurs by dressing up as his comic creation, “The Wolf.” This strip began in Wow Comics No. 23 (around Oct./Nov. 1944) and ran until the last issue of the title No. 30 (around the beginning of 1946). It’s notable because he began signing this strip as Tedd Steele with that second “d” and for the rest of his life always used the two “d”-s in Tedd.

He did four covers for Bell Features, a couple of Pvt. Stuff covers for Joke Comics 9 and 10 and also a couple of Speed Savage ones as the “White Mask” through his costume transition in Triumph Comics 14 and 15. Something notable that we must point out from his later work is the four-part “Thunderfist and the Men from Mars” that closed out that character’s comic book existence in Active Comics 23 (June/July 1945) to 26 (Jan./Feb. 1946).

His quirkiness comes from the fact that in his work he never seems to really take himself seriously as a comic book artist and he had a wonderful ability to laugh at himself and the job he was doing. It really looked like he was having fun when he drew a lot of these strips. 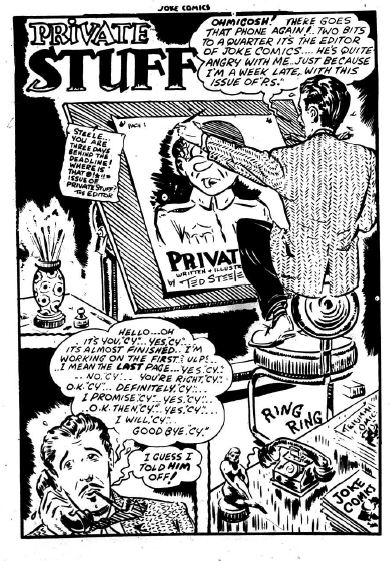 He sometimes placed himself (along with Leo Bachle, Ross Saakel, and even Cy Bell) directly into his stories such as the “Pvt. Stuff” story in Joke Comics 16 (Nov./Dec. 1944) and the “Artists on Ice” story in Active Comics 19 (Oct./Nov. 1944) which developed into “The Panthers” hockey team stories in Active Comics 20 and 21 that also included himself and his Bell Features stable mates. Sometimes he did this indirectly by making the star of the story a comic book artist as he did with his “Woody and the Wolf” feature in Wow Comics. He even produced a full-page cartoon, which was more the specialty of people like Mickey Owens, at the end of Triumph Comics 16 (Oct./Nov. 1943?).

His quirkiness is also evident in the contest he ran in Triumph Comics 15 where he asked for positive or negative comments on the new “White Mask” costume in his Speed Savage strip and suggestions for the type of story the readers would like to see. This led to the crossover of Capt. Wonder into the Speed Savage strip in Triumph Comics 18 (see my earlier post “Crossovers”).

Steele did a few war-themed one-off strips in the later issues of Wow Comics and Triumph Comics and one of these, “Heads from Hell” produced a favourite splash page of mine and really brings Steele’s quirkiness. With a more sinister and supernatural ending, this could have been a classic E.C. story that butted right up to the appearance of the Comics Code.

Tedd Steele’s last work for Bell seems to have been his last Speed Savage story in Triumph Comics 31 (June/July 1946?) and shortly after, or even concurrently, he began doing freelance writing for Export Publishing Pulps in the form of short fillers for some of their Detective and Western titles. When Export publishing began to produce paperbacks, first for the British market in 1946 and then for Canada in 1948, he submitted freelance novellas and two were published under his own name, Artists, Models and Murder and Trail of Vengeance. Two others, Pagans and Torch of Violence, he published under pseudonyms such as David or Jack Benedict, David Forrest, or Jack Romaine and they echoed on for years in reprints, sometimes with changed titles. He never did any art for these books. 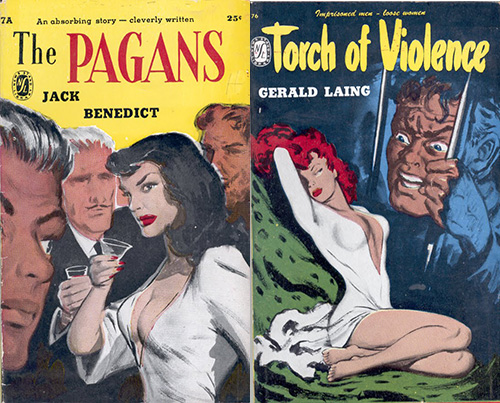 From the mid-fifties to the mid-sixties, Tedd was one of the original “Madmen” doing art and copy for an advertising agency in Toronto and then became a freelance artist and writer for advertising into the 1980s.

Tedd Steele was an original and was just as prolific and creative as the major Bell Features artists such as Adrian Dingle, Jerry Lazare, and Leo Bachle who have already been recognized with Shuster Awards. He created one of the iconic characters of the WECA period in Speed Savage/the White Mask and he was quirky. Let’s not wait too long before we recognize him.