DATELINE: Anaheim– The biggest announcement to come out of WonderCon this past week, was DC’s blockbuster news that they will be coming out with yet another JUSTICE LEAGUE comic. With the overwhelming sales success of the new JUSTICE LEAGUE OF AMERICA book, DC is rushing through plans for a sister series:

THE JUSTICE LEAGUE OF CORPORATE AMERICA!

The Justice League of Corporate America will be made up of heroes, each one sponsored by a different corporate entity. The JLCA line-up will feature slightly-altered versions of existing heroes, changed to make them more attractive to sponsors. Taking a tip from NASCAR, the characters will be adorned with patches proclaiming their allegiance to some of the biggest manufacturers in the world.

This reporter was able to get his hands on the script for the TV spot which will introduce the JLCA to the mass consumption world.

“From their secret headquarters on Wall Street comes the greatest superheroes the world has ever known: THE JUSTICE LEAGUE OF CORPORATE AMERICA! With endorsements and product placement far beyond those of mortal men comes–

AQUA-VELVA MAN! CEO of the Seven Seas! He possesses the power to control all underwater life with his cool, refreshing smell!

WAL-MARTIAN MANHUNTER! Beware Mom-and-Pop store! This man from another world is invading Earth with low prices and the best selection! But he’s never so busy, that he doesn’t greet everybody at the door with a smiley sticker! 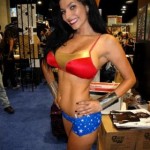 WONDERBRA WOMAN! The Princess of Playtex! It lifts. It separates. And when any man touches them, he is compelled to tell the truth!

THE GOLDEN ARCHER! When Mayor McCheese has a problem, he is quick to call on this fast-talking, fast-food fighter! He’s quick with a bow, and even quicker with the snappy one-liners like: “Do you want FRIES with that Boxing Glove Arrow?” and “You’ve sampled my Laughing Gas Arrow, how about an APPLE PIE?”

BLACK AND DECKER CANARY! From the Alternative Lifestyle Reality of Earth-Two-ish! Her dexterity with tools has made her the nightmare of all crooks…and the dream-girl of a growing demographic of young ladies!

CIALIS-BORG! When activated, his amazing powers can last for approximately an hour! But if the powers last for more than four hours, he needs to call his physician.”

The JUSTICE LEAGUE OF CORPORATE AMERICA promises thrills, excitement, and merchandising out the ass! And you won’t want to miss the Shocking Twist, when they find out they’re all owned by the CHINESE!!