You may think that the above picture is some sort of study from Da Vinci’s “Last Supper” but it’s actually the panel from my presentation at Toronto Con this past weekend. From left to right it’s Gerhard, James Waley, Fadi Hakim, some photo bomber, and Richard Comely. We talked about what made a comic a Canadian comic and when each one became aware that there were Canadian comics. We also talked about what was going on in comics when each of the panelists became involved in Canadian comics. We had a great crowd who really seemed interested in the history of Canadian comics and asked some good questions.

I have been corresponding a little with Brad Middleton and got to meet him at the end of the presentation. Brad is a master of the horror genre and has written a book on vampire television and he is presently working on a book looking at the history of the horror genre in Canada called The Great Fright North. Brad has a blog column called “My Bloody Obsession” at http://www.bradmiddleton.ca/p/main.html.

Got a chance to meet up with the rest of the guys working on the WECA Price Guide and we were able to hash out a few things face to face. What does everybody think an 8.0 Triumph No. 1 or Better No. 1 is worth? However, the highlight of the afternoon was Tony Andrews showing us his latest tattoo. Besides collecting Canadian war time comics, Tony is a huge EC collector and is working on completing the entire EC run—including all the Canadian issues as well! He had this little cute tattoo on his back and here it is:

Anybody wanting a comic cover tattoo (or any tattoo or piercing whatsoever for that matter) head on over to Tony’s shop on Water St. in Peterborough. They won’t let you down.

Also a paper I wrote a couple of years ago intended for a volume exploring Canadian identity in comics came out this month in the Canadian Review of Comparative Literature Vol. 43 No. 1. It’s nestled in among ten other papers on subjects connected to that theme and the funny thing is that they selected one of the graphics I sent in as the cover image. You’ll recognize the reprobate depicted here:

The title of my paper was “Truth, Justice, and the Canadian Way, the War-Time Comics of Bell Features Publications.” I have no idea where a copy can be obtained other than in university and some public libraries. Perhaps I should post the whole thing here as an extended column and see if I get chased in some convoluted way for breaking a copyright control on my own piece?

Last week I also approached the Canadian Warplane Heritage Museum here in Hamilton to see if they would be interested in putting together an exhibit of the way in which the old WECA comics depicted the Second World War and they seem interested in pursuing this further for 2017. It would be great to see some of the original Bell Feature art pages from the Library and Archives of Canada on display at the Museum for a month as well as some of the original comics and maybe some cover pics and pages blown up to poster size. I think such a thing would present a positive and popular exhibit if we could have it up for a month or so… maybe we could even arrange to have it travel if some grant money is available.

Some other bits of news… Gerald Lazare, who turns 89 in September, has been kind enough to do a foreword to my book on Bell Features artists coming out in December but, in addition to this, last week I asked John Bell to do a foreword as well and, happily, he agreed. Still not content I asked Patrick Loubert and Michael Hirsh if they could contribute with some words and they were kind enough to offer to do an afterword. I cannot tell you how important it is for me to have all these individuals put their imprimaturs on my book because my work is directly linked to theirs. Gerald Lazare and his wife Setsuko because they have spent long hours with me discussing not only those comics and the people involved in them but art and life in general all this while serving a piece of cake and a cup of tea each time I visited. I am most thankful for the fact that I can now count them as friends. John Bell because of his great research and publications which helped me get behind the surface of that world of Canadian war-time comics and I am indebted to him for that. Patrick Loubert and Michael Hirsh because their 1971 book first made me aware that there was such a thing as a Canadian comic book and because the legacy they have left up at the Library and Archives of Canada has enabled me to research and produce this book by reproducing a small part of it in the book. I must thank all of them for making my book better. (Hey, I think I’ve just written part of my “Acknowledgements” section.)

As for the book, one thing I am struggling with is the cover. Many people have suggested that I approach a current leading artist in the Canadian comic field such as Jeff Lemire or Seth and ask them if they would design and illustrate a cover all to improve sales. On my part, I am not that concerned with the popularity of the book. The intent of the book is that the real people behind those Bell Features comics not be forgotten because they were cool individuals who produced fantastic work even after they left comics. I want the book to end up on the shelves of people who really appreciate those old comics and on the shelves of public libraries and school libraries so that another piece of our Canadian-ness can be remembered and preserved a little. I’m not sure how a commission for a cover by a contemporary Canadian comic artist could be connected properly to subject matter at hand. Maybe a Dave Sim, who has interviewed Dingle and Lazare and who knows these comics might be a proper choice but I’m inclined just to stick a large, embossed Bell Features logo on the cover and have some of the original art pages floating around it. Any of your opinions, especially from any of you artists, on this would be more than welcome

Still, I don’t want this column to be a total self-indulgence so let me turn to the WECA Bell Features books a little.

During that fateful year of 1946, Bell Features seemed to be the Canadian company that was trying to survive the most in the face of returning American comics. I say this because it seemed to have promised the most for the future. Look at the back cover for Commando Comics No. 22 and the identical back cover for Slam-Bang Comics No. 8 which, though it had a new René Kulbach cover on the front, was filled, ironically, only with American reprinted content.

The promise seemed to be new comics featuring The Brain, Nitro, Capt. Wonder, The Dreamer, and Johnny Canuck (funny that they never considered giving Nelvana her own title; perhaps they intended to continue her as a feature in Triumph Comics). What we actually got was the previous issue of Slam-Bang Comics which brought together a number of leftover stories as the main Bell Features titles were crumbling apart through attrition and then about a year later a cobbled together collection of some more leftover Bell stories by F. E. Howard in Super Duper Comics No. 3 (where Michael T. Gilbert first saw Kelly’s Mr. Monster). Everything else on that back cover of Commando Comics 22 was filled only with American reprint content or just didn’t come out at all.

Cyril Bell’s hopes for his comics were reaching far and wide at the end of 1945. Take a look at his announcement on p. 8 of Dime Comics No. 27 which has a palpable aura of irony around it.

We all know that last Mr. Monster panel in Triumph Comics No. 31 which promises the next full-colour installment in Unusual Comics No. 1, a book which contained only American reprints when it came out.

Let’s also look at some of the promises Bell Features made in the final original stories of some of its main characters. Here is New Triumph Comics No. 32 (even though the covers says No. 27) and was the issue that followed after that last Mr. Monster panel.

The artwork for both these front and back covers is by René Kulbach and the covers of all the comics depicted on that back cover were newly drawn by Canadian artists, but the guts of each one of them were American.

In Active Comics No. 28, the final Canadian content issue of the title, the last panel of The Dreamer story promises an appearance by the hero in full-colour in the next issue.

The final issue of Wow comics promised the reappearance of both Jeff Waring and the Penguin. The former in the next issue of the title and the latter somewhere less definite andmorphed into the Blue Raven.

Both did appear in Slam-Bang Comics No. 7. A further new Jeff Waring story in colour also appeared about a year after that in Super Duper Comics No. 3. The last appearance of the Polka-Dot Pirate in Commando Comics No. 22 also promised a full-colour new story and we also got that in Slam-Bang 7.

One story arc I lament was never finished was Tedd Steele’s “Woody and the Wolf” story also in that final issue of Wow Comics. Here Tedd parodies Cy Bell and brother Gene who stood at the helm of Bell Features. He had already parodied Cy and fellow artists Ross Saakel and Leo Bachle in Joke Comics No. 16 and in a short series of stories about Cy Bell’s hockey team “The Panthers” in Active Comics Nos. 19-21.

Here are the last four pages of the story. I wonder where it would have gone and, in fact, if the follow-up had actually been completed. 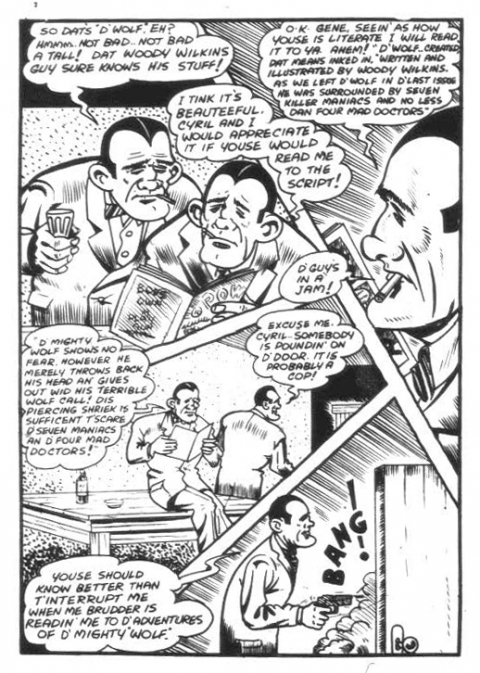 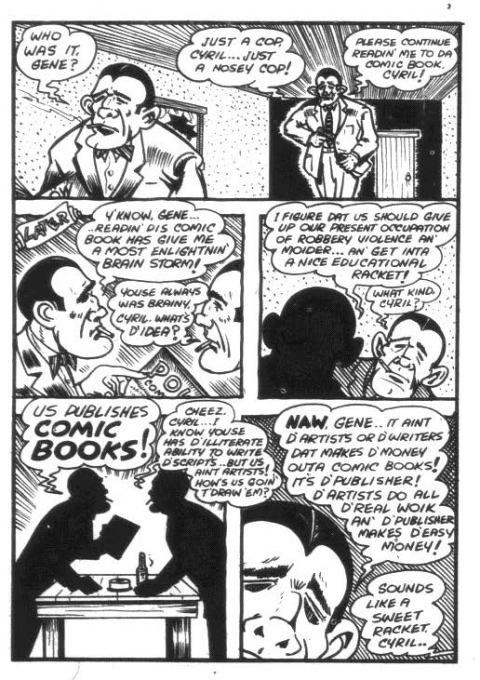 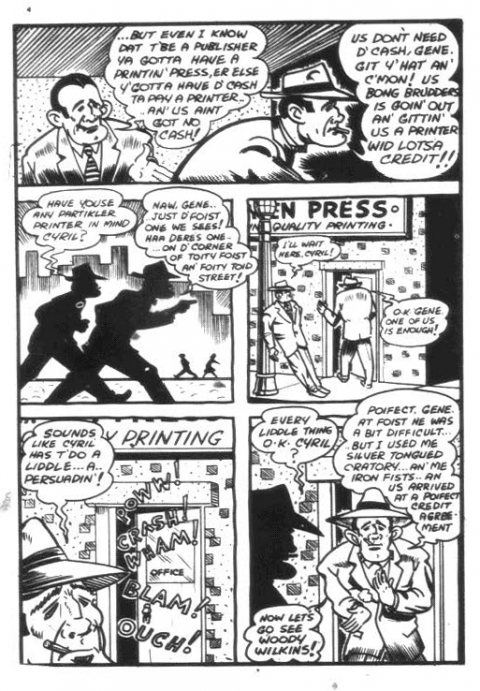 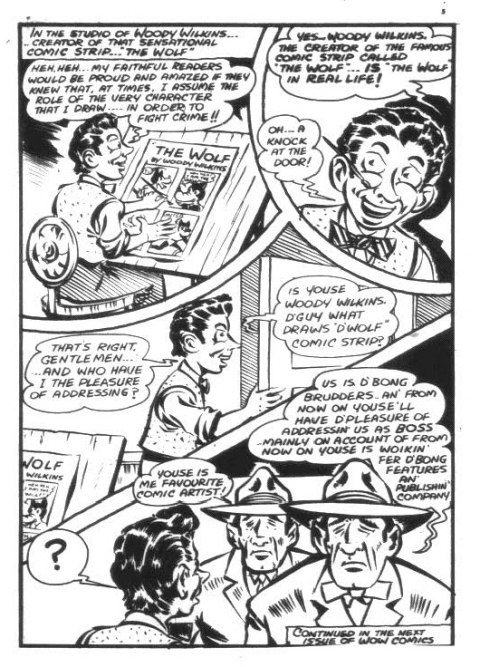 As we know, the guillotine fell quickly and abruptly for all the Canadian WECA publishers and the only other books that came out for Bell Features other than Slam-Bang Comics No. 7 and F. E. Howard’s Super Duper Comics No. 3 were filled with American reprints. Something to lament indeed.