Pete hurt himself heli-skiing so Anthony is filling in this week. Here is the question: 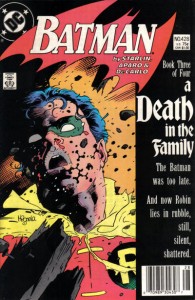 Death in Comic Books is all the rage these days. If you were editor in chief at any company, who would you kill off and why?

In mainstream superhero comics, I’d say…nobody. In all seriousness, there are way too many comic book deaths. As a comic book trope – one that’s been transferred to other forms of popular culture – it has been sucked of all of its meaning and emotion. Its lack of resonance comes from the lack of narrative tension – you know that, while any character can die at any time, that character is eventually coming back, it’s just a matter of time. There’s no longer that punch to the gut that you got when Jean Grey died (the first time) or that iconic panel when Gwen Stacey’s neck breaks.

Hard to say, I’m not a huge fan of killing off characters just for the sake of killing them off. If they’re gonna die, it should be for a specific reason and well executed. While the most “realistic” manner of death would probably be some accidental crossfire by a nameless Hydra goon or something, it probably wouldn’t make for much dramatic reading. If I had to pick someone to kill off..I would probably pick a villain to be killed by a popular superhero. In fact, I’ll go with Norman Osborn with his death by Spider-Man. Osborn’s done so much crap to Spider-Man and then you toss in all the Dark Reign stuff, there’s no reason that he should be alive in the Marvel universe. Sure politically you could say that he has dirt on influential politicians and all that but heck Captain America and the Avengers have done so much for the public, they should be able to pimpslap anyone on the street and they should be saying “thank you sir, may I have another?”. So yes, it’s been so mind-boggling that Osborn is still around that I am going to throw him to the lions but I want Spider-Man to be the one who does the job. It would be a huge turning point in Spidey’s narrative and still make sense.

I have growing issues with the idea of the comic book death considering how routine it’s almost becoming. It’s lost its meaning, and now Marvel is turning it into a marketing gimmick. Deaths should punch you in the gut, and more, should be permanent.

So who would I kill? I’ll go with a great story; I’d kill all of the Guardians of the Universe in Green Lantern and install members of each corps as representatives on an intergalactic council. The guardians don’t really serve a purpose any more, so why not push the larger Green Lantern story forward?

Scott VanderPloeg (writer of CBD’s Bound Together column; his ramblings can be found blogged at eBabble)

Kill off every Mort “red shirt” low-level character, at least one per story arc. Killing off a main big name money-making character is a waste of time since we know they’ll be back, unless Marvel and DC decide they have enough money.

DC had it right when they killed Sue and those others we forget in Identity Crisis: characters that no one cares about but can make a dramatic story.

RE: Anthony’s comment to Shelley: Says the guy who when asked to pick the most important person in comics picked two people…

Anthony: I stand by my choices. And yes Scott, it is hard being right all the time.

Scott: It must be exhausting defending the wrong answer all the time.

Anthony: Says the man who just admitted to tearing up when Kyle Rayner “died”. The way you describe it is how people talk about where they were when Kennedy was shot.

Somewhere between all and none?

I actually think Marvel made a good decision a few years ago thinning the herd on mutants, there really were just waaay to many super powered people running around.
But actual death? I think Shelly’s right. Jean/Phoenix had weight and power, as did Gwen Stacey. When we get to the point we’re killing off the there’d be gunfire everywhere and yet the Cobra guys were always able to eject from their helicopters, but in Robotech, pilots died. Major characters died, and it was upsetting.

I think if you are going to have a death, it’s gotta be a Bambi’s mother death. That said, can we just kill Deadpool? Stop beating the horse and put it out of our misery.

Anthony: This has clearly been the best 52Q ever. Obviously Pete is the weak link.

Chris: It’s been the one with the most bickering, obviously Pete keeps us in line. ;P