If Captain Britain vanished from the red pages of Marvel without a trace, would anyone (Stateside) care? Or even notice?! With Disney’s (fairly) recent decision that “all Marvel Superheroes must originate in the United States” we may well see that happen very soon – and only then would there be any tantrums from the (usually very quiet), patriotic Brit-nerds.

Captain Britain (Brian Braddock) was originally pencilled as Britannic – which, in my opinion is actually a bit stronger than ‘Captain Britain’ (as a name) as there isn’t that immediate affiliation to Cap and he would’ve stood alone. He was initially intended by his creators, Chris Claremont and Herb Trimpe, to be the British equivalent of Captain America, although there is room for him to be a bit more individual, classy and ‘espionage y’ I think.   Tarnished with extraordinary powers bestowed upon him by legendary magician Merlyn and his daughter Roma, Captain Britain was assigned to “uphold the laws of Britain” and why the hell not.  Thanks Captain Britain… I hope he stops around 4 o’clock every afternoon for tea and crumpets.

Cap Britain has paraded across Panini Comics/Marvel UK’s pages for some years now since his first appearance in Captain Britain Weekly, #1 (October 13, 1976).  However, with Disney deciding that “all Marvel Superheroes must originate in the United States”, Panini/Marvel UK (whom provide stories for new readers outside the States) will  need to fill the void – and since Marvel don’t seem to generate much Cap Britain content either, will he ever be seen again?… or should he? 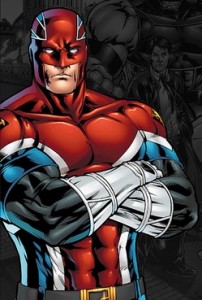 Panini Comics is an Italian comic book publisher, best known for their collectible stickers.  They publish comic books in Argentina, Brazil, Chile, France, Germany, Hungary, Italy, Portugal, Spain and the United Kingdom, as well as printing manga in several non-English-speaking countries.  And they’re also the company responsible for printing the Doctor Who Magazine so… it’s a real shame they can’t play with the Yanks anymore.