I just found a post on NewStatesman from September last year and I think it’s worth sharing.

NewStatesman is a knowingly highbrow, politically heavy, national media news site with an occasional lean towards pop-culture.  Its content is (historically) conceived in a place built upon intelligent wit and informed social commentary.  But in recent months, it seems that comics have made their way into the realm of ‘acceptable’ subject matter among the site’s editors… and why not.

This piece reviewing Manapul’s Flash was posted on Sunday.

It serves nicely as a civilian take on the books us comics fans know and love deeply.  It’s interesting to me that the language, tone and content is geared towards people whom may generally be interested in art and literature, but maybe don’t have that immediate knowledge of recently published/available comics (and their politics) as us nerdy types do.  So I think the coverage is good overall, but the jury’s out on whether or not I agree with the review and its timing. 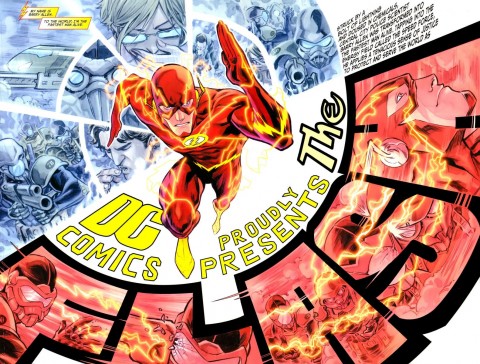 The earlier piece RE: Grant Morrison is quite lengthy/wordy, but it is still worth a look.

Morrison is an artist first and foremost.  His mind works in a way that mere mortals — like you and I — could never comprehend, regardless of whether or not we actually like him or his work.  His books are largely hit-and-miss in terms of quality for me, but mostly… it’s always intriguing at very least.

Should “freelance” comic creators — whom are working consistently for big publishers — have a little more consideration for the brand/product they’re discussing?  Some of Morrison’s comments could be construed as damaging and his attitude in general is quite defensive and completely void of any responsibility.  Though, the way DC function in terms of process, timing and procedure sounds like it could be massively annoying and restrictive to an artist in his defence.  But while a commercial artist should tick the artist  box first, they must always also be sure to tick the commercial  box too.

Is Morrison stepping out of line by saying… whatever the hell he feels like in such a high profile publication about a product he doesn’t own?

It is interesting however, to read through some of this stuff with the luxury of hindsight.  Some of the projects mentioned have progressed since September last year – when the piece was published — while others are still exciting news to me and I also had no idea about the ‘book eating’ incident.  Madness.

His thoughts RE: the honour from the Queen are disappointing and some of the readers’ comments are telltale.

Have a read, see what you think.

All in… the fact that comics-news is making its way inside a different type of website is the point here.  A good thing overall, surely?

Don’t forget to click over to this week’s new page of my very own WebComic: CandyAppleFox and let me know what you think.