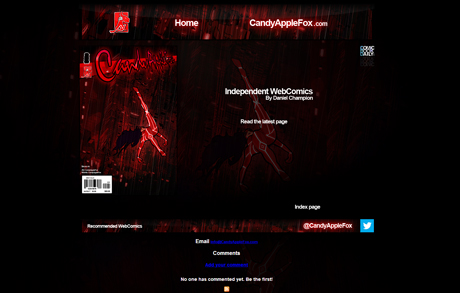 In the interests of learning how exactly to sell my amateur artwork, I’d like to take an opportunity to — quite shamelessly — plug my latest project here and would encourage any feedback from anyone whom is kind enough to check it out, either through the comments below or on my site directly.  Good, bad, indifferent, anything goes.  I genuinely want to know what people actually think about this, and I want to know where you’d expect to see improvements before you’d consider adding it to your favourites and visiting every week.

I’ve changed the site quite a lot since I first launched it and I had to do that… it was neither good enough or clear enough as it was.  I like to think it’s immediately clear what the site is now and if I ever reach the point of working with other amateur creators, it will obviously need to change again.  But as of right now it’s intentionally simple, direct and hopefully obvious enough (to a new visitor) that the site is… Indie WebComics created by myself.

On the HP, you’ve essentially got 3 options:

1) You can read the latest issue (of which there’s currently only a Cover and a PageOne right now.  8 more pages will follow weekly starting next Wednesday.

2) You can go straight to the latest Page (which is slightly animated).

3) Or you can go to the Index Page and select a place to start from there.  Again, the content will obviously grow over time.

On the latest page, there’s an option to ‘Un-wrap’ the art  (bottom right) which will display the artwork broken down to an interesting point during production.  From there, the user can navigate back to the finished page and will continue the story. 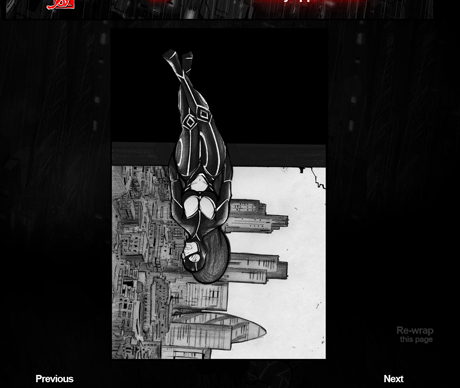 There’s only one lead character live on site at the moment, one ‘title’.   It’s my take on a classic superhero story and it’s also a metaphor for my own experiences of trying to break into the Comics business.  The flagship protagonist’s name is Victoria Hope Reveur, known to her friends as Hope or by the nickname: Foxy).  By day she’s mostly frustrated by the rhythm and routine of a normal job.  She’s also increasingly jaded by her own life in general and the way people see her in the world: as a worthless nobody, which really isn’t the case.   Her 9-to-5 life is un-inspired and void of any real skill or ability and as a result, she commands no respect or admiration from her colleagues.  It’s necessary however, to continue on down that road for the time-being as she is still an amateur and needs to fund her dreams somehow which are frantically trying to reveal themselves in her real life.  By night (and on the weekends), she fights tirelessly for her secret talent, her superpower.   She is important.  She does deserve respect and should be able to exist in the place where she truly belongs for the bulk of her precious time.  She just needs a break, a way in… so that her part-time dream-life as the CandyAppleFox  can become her primary focus, and she can go pro.

This scenario is similar to any amateur creator trying to break into comics… but in her world, it’s true of all wannabe superheroes — talented and misunderstood people — fighting only to be professional superheroes and not be restricted by finance or time or a ‘real’ job. 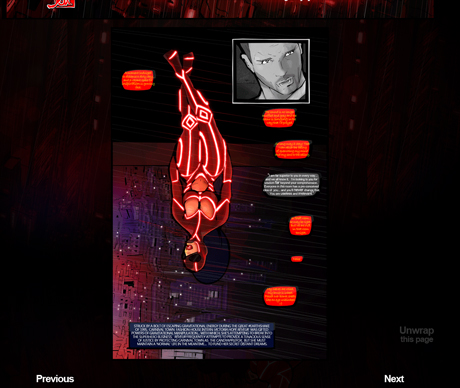 Her mother and brother also play key roles in her story which will also be shared down the line.  Her brother is one of a bunch of characters involved in an event-story set to happen after these initial character introductions.  So there’s plenty of story to unfold if I manage to gain any momentum.

In addition to the attempted story that’s occurring, I’m trying to develop the site as a product that could be enjoyed and shared and eventually even support advertising or affiliate partnerships to further strengthen its identity.  Maybe, once there’s any kind of continued interest, I’ll attempt some kind of kickStarter.

I will keep applying this idea until I find a way to make it stick and produce a thing that people are genuinely interested in.  I hope I’m getting closer to that with this and as above, I’d love to hear your thoughts on what you’d expect from something like this before you’d remember to check it out every week.

PS:  If you want to be involved in this in any way, please shout.  If you’d like to post a link to your project or site or shop on here, I’m all ears.