In the early seventies, Marvel comics created a group of try out titles that featured new and sometimes old characters they wanted to showcase (great name for a try out book) to see if there was sufficient interest in the character to support their own title. Amazing Adventures, Astonishing Tales, Marvel Spotlight, Marvel Presents, Marvel Feature, and our Arc & Run Marvel Premiere all featured try-out characters old and new. I always felt Marvel Premiere was the best and most diverse of the Marvel try-out titles followed by Marvel Spotlight.

In the last couple of years Marvel Premiere has turned into a gold mine in terms of hot characters in the entertainment industry. Adam Warlock is being heavily speculated to be a character in the Avengers movie franchise at some point given his history with the movies big bad – Thanos. Doctor Strange has his  own movie starring Benedict Cumberbatch in the lead role. Iron Fist will soon be featured in his own TV series on Netflix. The new Ant-Man Scott Lang made his movie debut last year starring Paul Rudd and he is following this up with an Avenger movie appearance and a second movie.

We will focus our attention today on the first three characters listed above and their first issues in Marvel Premiere, and follow with some detail about the rest of the series and subsequent launches of their own titles. Scott Lang’s Ant-Man has already been well covered in Walter’s Undervalued Spotlight # 201. 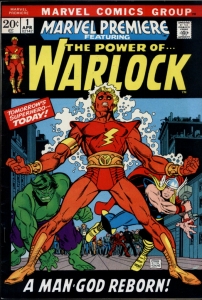 Marvel Premiere #1
April 1972
And men shall call him Warlock

Warlock continues in the next issue of Marvel Premiere and then he begins his own title called the Power of Warlock which lasts eight issues. It re-starts with Jim Starlin at the helm and then jumps over to Strange Tales beginning with issue #178 with a classic run I plan to explore in detail at another date. Warlock continues to be a force in the Marvel Universe today.

Many people consider this book to be Warlocks his first appearance, and not earlier “Him” appearances in Fantastic Four #66 & 67 and Thor #165-166. 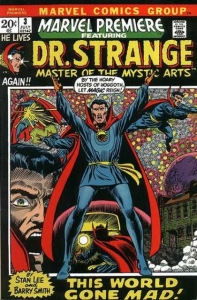 The good doctor returns in this beautifully rendered book by Barry Windsor- Smith. Things have been looking up for Doctor Strange since the cancellation of his series in November 1969. Following a two year hiatus in November 1971 he became one of the founding members of the newly formed super-hero group the Defenders. Here in July of 1972 he begins a twelve issue solo run in Marvel Premiere.

There is no re-cap or anything like that in this issue, the story begins as if he had never been away. I never try to explain Doctor Strange stories in too much detail. Lots of By the Seven rings of Raggadorr, By the Crimson Bands of Cyttorak (look out Juggernaut), By the Hoary Hosts of Hoggarth, and so on. Suffice to say the Doctor is in a fight for his life with his old enemy Nightmare. Nightmare is being guided by an unseen deadlier force who we meet in the future issues….

All of the old hands are here to help the Doctor. The Ancient One, Wong, Clea, and enemies like Nightmare, Baron Mordo, and the Spawn of Sluggeth. All good fun.

Marvel Premiere #11 is a special treat with Steve Ditko reprints of the Origin of Doctor Strange and the Many traps of Baron Mordo, plus an original story.

Terrific artwork is found all through the run with stellar contributions from Frank Brunner, Jim Starlin, Mike Ploog, and Barry Windsor-Smith in this issue and the next.

Doctor Strange begins a new and much longer run (eighty-one issue) three months following the end of Marvel Premiere #14. I hope to get into that run in some detail in the future. 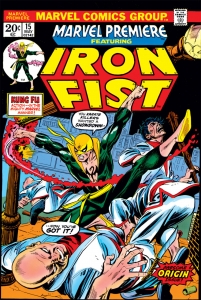 Our final issue today is a true origin story and the first appearance of Iron Fist (aka Danny Rand). The story begins in the magical land of Kun’Lun and Iron Fist battling Yu-ti and the Dragon Kings four stooges. Iron Fist defeats the lot of them and then reflects on how he came to be here. His father Wendell Rand, wife Heather, and small son Danny are on a trip in Kun’Lun where Wendell is apparently from. Wendell’s business partner Harold Meachum is along for the ride. It soon becomes clear Meachum was here to kill Wendell Rand and he does in a rather gruesome way stepping on Rand’s hand with spiked boots until he gives way and falls to his death in a chasm. This happens in front of Danny and his mother. Back to the present. Danny Rand is Iron Fist and now must face the challenge of Shu-Hu the silent one. He looks deadly. Iron fist accepts the challenge and is getting pounded. His mind drifts back to his mother and his young self looking for the hidden kun’lun without the now dead Wendell Rand. Meachum has left them to die. It looks like this is what will happen next when suddenly a bridge appears in front of them, and a pack of wolves appears behind them. The two race for the bridge. Heather Rand knows they both won’t make it. She sends Danny on and she turns and run’s back to the wolf pack. A group of men suddenly appear and pull Danny to safety and bow and arrow the wolf pack. It is however, too late for Heather Meachum and Danny views her bloodied and dead body. Back to the present Shu-Hu has Iron Fist down and he shoots a dagger into his shoulder. Iron Fist is in pain but remembers his mom and what she sacrificed for him and he goes berserk. He tears into Shu-Hu and for the first time his Iron Fist appears in his glowing hand and he knocks Shu-Hu’s head completely off. Shu-Hu was a robot. Iron Fist has won – the right to choose between immortality and death as this issue comes to a close.

Iron Fist runs in Marvel Premiere until issue #25. He then has a fifteen issue series of his own before it is cancelled. He isn’t out of comics long, joining Power-Man in issue #48 of his title, and then the two character’s merge into one title Power Man/Iron Fist which runs on until issue #125 before cancellation.

Iron Fist continues to be a popular character in the Marvel Universe to this day.

45th Overstreet Price guide values for the three books reviewed. Prices have been rising steadily on these books and they may be a touch out of date right now. It’s funny – all of these books languished for years, many in bins not getting close to guide and they have all caught fire at about the same time.

Listed below is an index of all sixty-one of the Marvel Premiere comics and who appears in them.

This is a very diverse group of books and many of the lower seed books are in bargain bins. I wonder if there are any sleepers still waiting to be discovered in this group?

Good luck filling your want lists and we’ll see you next month.