In today’s installment of “The First Six” we will take a look at the start of The Mighty Thor in the Journey Into Mystery title.

About a month ago I was researching Marvels early beginnings and use of Norse Mythology and how it has played out in the Marvel Universe. I found out about early Loki and Thor appearances in the Timely title – Venus. Thinking I may have discovered an unknown treasure I contacted Walt to discuss the find. He of course already knew about these books, but used the memory jog to come up with Venus #12 for Undervalued Spotlight #288.

I had speculated in Walt’s spotlight that Stan Lee had taken the idea of developing the Norse mythology from these books and used them as a basis for the super-hero Thor we know today. There may be an element of truth there, but I feel the interest in creating the new world of Thor and Asgard came from the co-creator of the new Thor – Jack Kirby. I think Jack Kirby really took ownership of this character and how the whole Asgardian world was developed. Kirby was deeply involved from the get -go and his lengthy Thor run in general, is a very close second to his Fantastic Four run in my opinion. Captain America gets the bronze. When you think about it Kirby could probably have any strip he wanted at Marvel. He did start most of them and did cover work for many titles, but he stuck with Thor from the start right through issue #177 just before he left Marvel. Lucky us!!

The writing for the series started out with Larry Lieber at the helm, with help from his brother and editor Stan Lee. I always thought Larry’s work at Marvel was a bit underrated. Stan Lee eventually got back into the writing saddle full-time. The inking work on our featured run today is by long-time Kirby inkers Dick Ayers and Joe Sinnott. 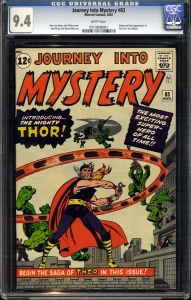 A new series begins with the introduction of doctor Donald Blake vacationing in Norway. A spaceship arrives in the distance carrying an invasion force from Saturn and the all powerful Stone Men. A fisherman sees them land and he runs back to warn his village. They of course think he has lost his noodle, but Donald Blake goes to investigate. He finds the Stone Men and he himself is soon found out by the Stone Men. Donald Blake manages to escape into an old cave where he finds a secret cavern to hide in. Inside he finds a wooden stick that he tries to use to move a large stone and in tapping the stick turns in to the Mighty Thor. The stick has become a mighty hammer – complete with engraved instructions on how to use it.  After a quick demonstration of it’s powers Doctor Blake/Thor is off to trash the Stone Men for Saturn. The all powerful Thor pummels the Stone Men and all they to throw at him. The Stone Men decide earth might not be a good place to try and conquer and they make haste for Saturn. The adventure of Thorr (their spelling not mine) has begun and the end of the story promises many new adventures in future issues of Journey in to Mystery.

The book also contains two short horror stories that were the staple in the previous version of Journey in to Mystery. This format would continue until issue #97 when the backup story became Tales of Asgard. 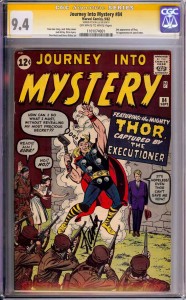 The 2nd issue of Thor begins with a quick one- page recap of the previous issue. This story begins in doctor Donald Blake’s practice back in the United States. Next we meet his nurse Jane Foster for the first time, and we are updated on the state of their relationship. It is strictly professional at this point, although both would like it to be something more. We then move to the heart of the story. A small South American country called San Diablo is in the middle of a civil war democrats vs the communists’ lead by a dictator called the “Executioner”. He is not the Executioner from Asgard that we meet later in Journey in to Mystery #103. Volunteer doctors are needed in the besieged country and Donald Blake and Jane Foster agree to go help. On route the volunteer ship is attacked by the Executioners army. Donald Blake slips away and changes to Thor and the rout is on until Jane is captured by the Executioner himself. Thor turns back to Donald Blake and let’s himself get led to where Jane Foster is being held captive. The Executioner decides to have Blake shot as a “Yankee’ spy but Blake manages to tap his walking stick and turn into Thor once more and he routs the commies. The Executioner is killed by his own men and the revolution is over. Jane and Doctor Blake return safely to the United States. Lots of action packed into a twelve page story. 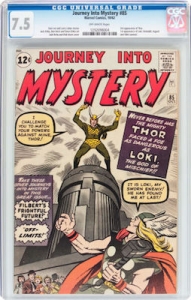 Journey Into Mystery #85
October 1962
Trapped by Loki, God of Mischief

The 3rd issue of The Mighty Thor is a major key. It introduces us to a plethora of Asgardian characters that will begin to shape Thor’s home world for us the reader, and form a base for many future stories. We meet Loki God of Mischief and Thor’s half brother, Odin Thor’s father and ruler of Asgard, Heimdall guardian of the rainbow (Bifrost) bridge, and Balder the Brave a friendly and loyal half brother of Thor. The story itself plays out like many Thor-Loki stories do going forward. Loki is at perpetual odds with his brother Thor and his father Odin. In this story Loki has been imprisoned in a tree by Odin for doing something wrong at an earlier date. He escapes and travels to earth to attack Thor and retrieve the Mjolnir hammer he feels should be his. Loki get’s the hammer and the upper hand for a time but he doesn’t know about Thor’s earthly alter-ego Donald Blake and it eventually becomes his undoing. Once defeated by Thor he is sent back to Asgard for – you guessed it – more punishment. A true Marvel key and huge book for a Thor comic fan. 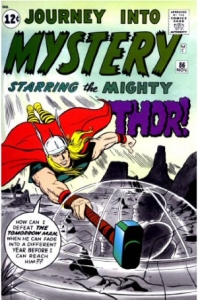 The 4th issue of Thor takes us in to the future and time travel. We meet Zarrko the Tomorrow Man a time traveller who wants to take earth’s technology of today (a cobalt bomb) in to his future world 2262 and rule the world with it. That’s the best he could do as a time traveller? Thor finds out from Odin that his hammer has the capability of time travel and he uses it to travel to Zarrko’s home planet and defeat him. Zarrko has plans for revenge and returns in a two-part Journey in to Mystery #101-102. 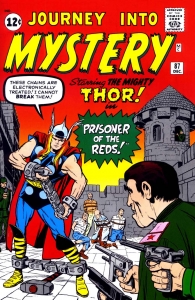 Journey Into Mystery #87
December 1962
Prisoner of the Reds

The 5th issue of Thor has him once more in conflict with “the communists” this time in the Soviet Union. Five prominent US scientists have “defected” to the Soviet Union, abandoning the United States way of life. Something smells here. Doctor Donald Blake makes himself a target and he is captured and taken to the Soviet Union where finds the five missing scientists, who were also captured against their will and are being threatened in to working for the communists. Enter Thor who with some effort defeats communist threat and releases the scientists. They escape the Soviet Union cross land and sea back to the United States.  There certainly was a bit of an obsession with communism at Marvel comics back then. Time and place I guess. 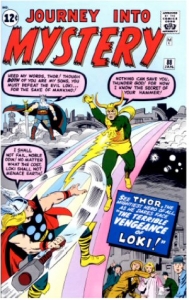 Journey Into Mystery #88
January 1962
The vengeance of Loki

Our 6th and final installment of the first six issues of the Mighty Thor finds us at the point where Thor sends Loki back to Asgard at the end of issue #85. Odin forbids Loki to ever leave Asgard again. That threat lasts about five minutes. Loki begins spying on Thor and learns of the Donald Blake identity. He can beat Thor if he doesn’t have his hammer. Loki hatches a plan. First he turns into a snake and slithers past Heimdall down the rainbow bridge. He disguises himself as an old man and enters Doctor Blake’s office where hypnotizes Jane Foster. He confronts Donald Blake and challenges him to a battle as Thor. They meet at a zoo where out of the blue pops a hypnotized Jane Foster appears and a tiger is about to attack her. Thor forgets about Loki and tackles the tiger, his time expires on the hammer clock and he reverts to Donald Blake. Loki puts the enchanted hammer in a force field – he has won. Loki leaves the helpless Donald Blake to make hay with the planet. In the paper the next day there is a challenge from Thor to Loki. Loki races back to the zoo to find Thor standing by the force field hammer in hand. Loki can’t believe his eyes. He turns off the force field the hammer is still there and Donald Blake comes from behind the fake Thor and grabs the hammer before Loki can turn the force field back on. Loki know he’s in trouble so he tries to hide as a pigeon in a flock of pigeons. Thor grabs a bag of peanuts from a vendor and throws them on the ground. They flock to the peanuts, all except one – Loki. Thor captures the still flying pigeon in a tennis net. Loki is returned by Thor to Asgard for – more punishment!

This ends our run of Thor today. Throughout this run I did not mention that Donald Blake was in fact lame. I have always thought of this “handicap” as just a prop for the walking stick that was used to turn him into Thor. Donald Blake was a brave and courageous character and he never felt lame to me.

I have also read that Steve Ditko did some work on the cover of issue #88. Is that a Ditko Loki- face?

Thor as a character has never been more popular than he is today, thanks in large part to the success of his movie appearances. I think Thor has the best cast of the individual marvel movie franchises. Tom Hiddleston has been superb as Loki; he really relishes the role and it shows on the screen. My wife and all her girlfriends assure me Chris Hemsworth is doing a wonderful job as Thor too.

Early Journey in to Mystery Thor comics were always notoriously difficult to find in grade, even back in the late 1970’s. Beat up copies were available but overpriced. As a result, I started my collection at issue #89 (love that cover) which was still early, however it did not include any of the books covered here today. A poor economic decision on my part to be certain, and I missed some pretty cool books to boot!

The 45th Overstreet Price guide values for our books today, are listed below.