According to the super-secret government monitoring station, operated jointly by the NSA, CIA, U.N.C.L.E. and Nabisco, you were the only person on the planet who purchased a copy of Fantastic Four #645. Before we dispatch a black-hat squad to your location, would you care to explain your reasons? 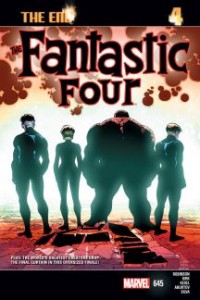 Here we are in the midst of a Convergence, and on the brink of a Secret War, and the final issue of Fantastic Four shuffles into into the sunset more-or-less unnoticed and that is a “fwiggin’ shame” to quote Lili Von Shtupp, the Teutonic Titwillow.

To be perfectly honest with you beloved Curmudgeonites (and I always am, except when I’m not), I don’t give a rodent’s booty about the politics that led to the cancellation of Fantastic Four, whether it was Marvel telling Fox to kiss it’s shiny red hiney, or the fact that somebody in the Bullpen finally looked up and said “Have you guys noticed nobody is buying Fantastic Four any more?”. It was time. It was way past time. The book hasn’t been relevant since Magnum was running on the beaches of Oahu (The P.I., not the ice cream bar… or birth control apparatus).

The Fantastic Four’s story had become bloated. How could it not? 645 issues, baby! That’s almost 54 years of comic book continuity! Superman has rebooted at least four times in the last 25 years.

Oh wait. What’s that? The whiny voice from the back of the room? ‘So has Fantastic Four’ you say? ‘What about Heroes Reborn?’ says another sledge-head next to him. Those weren’t reboots. It was the same story. Just because you edit out Willie Lumpkin or some such doesn’t equate to a reboot. It could only get bigger. Like a beached whale before Jack Hannah or the Kratts can get to it.

Fantastic Forty is more like it. First Crystal. Then Medusa, Then Luke Cage. Nova/Human Torch. She-Hulk. Ms. Marvel. At least according to Wikipedia. (What? I never said I didn’t use it. I just said I never believed it.) 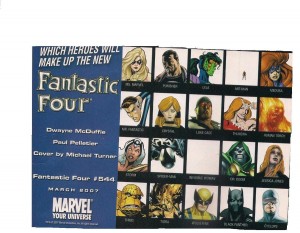 That all happened before FF got to Issue #400. Then it seems the FF went through members faster than Bruce Jenner through hair barrettes. (What? Too soon? Yes, yes, he’s very brave)

The Fantastic Four universe got bigger and more complex. Writers had no choice. What else were they supposed to do? They had to layer on more characters and more subplots.  At one time or another –and in some case numerous times– the original four members came and went. The dynamics changed. And it wasn’t Fantastic Four. The Avengers can change rosters. They’re a team. The FF was a family. And we just didn’t care about stories without the original family members, and the relationships between those families, that we loved. (i.e.: John Goodman leaving ‘Roseanne’ so he could go bowling with the Dude). Readers who were new to the book didn’t get the pure, uncut version of FF. 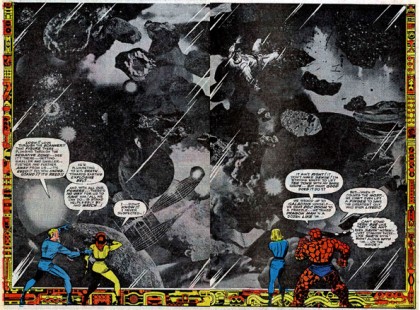 Remember: The stage the FF performed on was galactic-size. 54 years of end-of-the universe scenarios that usually come down to Reed building a high-tech doohickie to save the day. 54 years of the Thing turning back into Ben Grimm, then realizing he had made a mistake and needing to turn back. 54 years of Johnny giving Ben a hotfoot. 54 years of Sue being all maternally nurturing and stuff. 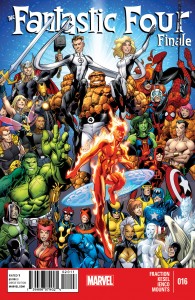 The final issue of Fantastic Four, #645, exploded like that bloated whale. It was jam-packed with characters I didn’t recognize and sub-plots I had no appreciation for. There were some cool things in it. Some elements that resonated. Nothing special. 32 Loud, crowded pages, written by James Robinson with art by Leonard Kirk, Karl Kesel and Scott Hanna. It was fine.

This was followed by a five-page Torch story by Kesel, Joe Bennett and Marco Loerzer. A four-page Sue story by Louise Simonson and David Marquez. A five-page Thing story by the Tom Trio: DeFalco, Grummett and Palmer.

At the very end of this multi-page offering came Time and Tide. That’s not some deep philosophical statement. That’s the title of the very last Fantastic Four story (for now) written by Jeff Parker and drawn by Pascal Campion. 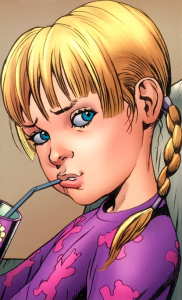 It’s basically a two-person scene with Reed and his daughter Val. A father and his little girl enjoying a vacation on the beach. No giants snacking on planets. No dimensions filled with giant insect people. No Ultimate Nullifiers or chrome-plated heralds hanging a shiny ten.

A dad teaching his baby girl about science and life and how to keep both in the correct perspectives. With just a dollop of super-powers sprinkled in.

The Fantastic Four ended it’s 54 year run with a shot of two family members loving each other.

Perfection. You are my hero, editor Mark Paniccia

If you missed it. You missed out.

Show respect, Curmudgeonites. The Fantastic Four was a seminal event in comic book history. It deserved that send-off. 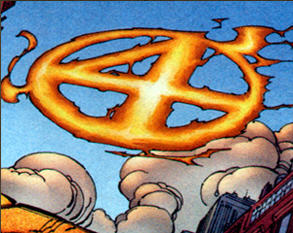