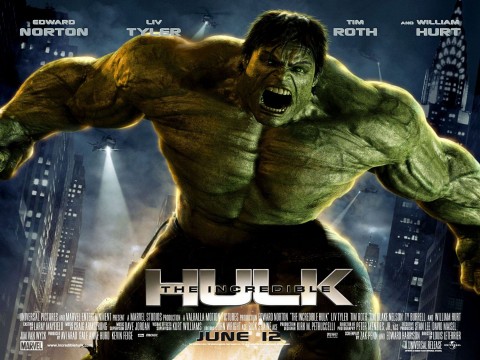 In preparation for the Avengers movie CBD is taking at look back at the films that led to this monumental cinematic occasion. This week the Road To The Avengers runs right though the Incredible Hulk.

Anthony: I remember liking this movie a lot more when I saw it in the theatres, but that could be because it is so much better than the previous Ang Lee Hulk movie. While I appreciate the acting and the special effects, the film is really a pretty standard action flick and easily the weakest of the 5 Avenger movies. It is also the one that you could skip as a primer; the trailers for The Avengers tell you everything you need to know about Bruce Banner and the Hulk.

Leigh:   When this movie came out all I could think was, “really the Hulk again!” Five years prior they put out a Hulk movie with Eric Bana and Jennifer Connelly and it wasn’t very good. I started calling The Incredible Hulk, The Mulligan Hulk. When I finally went to the theatre I was hoping to be impressed, I was hoping they learned their lesson with the first Hulk, and the cast line up was pretty impressive. Edward Norton and Liv Tyler, how could you go wrong!? But, sadly the movie was quite forgettable. It wasn’t necessarily bad, but it was great either. At least Lou Ferrigno had a cameo in it.

Anthony:  Ferrigno is the king. I actually dislike the fact that Hulk was CGI. I know that he is still CGI in the Avengers as well but I really feel that you could get a great look with an actor in make-up. Remember what they did in Hellboy? Amazing make-up and CGI when necessary, instead of using all CGI. Don’t get me wrong, the special effects on The Incredible Hulk are great but it still doesn’t quite have that real look that an actual person would have. (I know that I have never met a real gamma irradiated person, but you know what I mean).

Leigh: Yes Hellboy was amazing, but I don’t think they could get the Hulk to look so large and hulky without making him CGI. He also looked way less cartoony and more realistic than the Hulk with Eric Bana. Really, when you look at the two movies in comparison The Incredible Hulk is a lot better than its earlier counter part,so what really makes it so blah? Is it just simply its story line? Now they are redoing the Hulk again by having a new actor play him in the avengers movie. Are they really taking another stab at the Hulk story line? Or do you think he will take a back seat to the other better established characters.

Anthony: Hulk? Is that the technical term? In the Avengers movie Banner will take a back seat. The Hulk will be pretty important in the epic battle scenes that the trailers promise us. My final thoughts on the film would be skip it for Avengers prep. The best part of the movie is Edward Norton as Banner and he isn’t even in The Avengers. However, the movie did get filmed in Toronto and you can see the iconic Sam the Record Man sign during the Harlem fight scene. So go Canada!

# The Avengers Movie# The Incredible Hulk